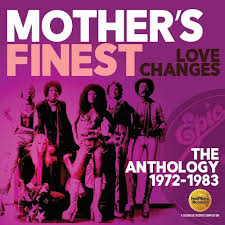 Anthology spanning eleven years in the life of the pioneering rock & soul band Mother’s Finest. LTW’s Ian Canty reviews what was probably the only band to play on the same bill as Funkadelic, The Commodores and Black Sabbath.

On the face of it, Atlanta’s Mother’s Finest looked very much a typical US Funk band of the early ’70s, all kitted out in Glammy scarves, stack heels and the other usual fashion accoutrements of the era. A mixed race and sex outfit, they took up the baton from the likes of Sly And The Family Stone and Funkadelic to push out from the soul and RnB modes of the ’60s into a rock context, whilst maintaining a firm and very danceable funk base. But MF went far further than their inspirations – their adventures into the ’70s rock & roll hinterlands had them touring with the likes of the Who and AC/DC and not having a problem with matching them in the rock & roll stakes.

Combining the twin male/female vocal attack of Glenn Murdock and Joyce Kennedy, Mother’s Finest formed in 1970 and quickly forged a totally new direction for themselves that deified easy categorisation, but won them lots of fans due to their no-holds-barred thrust, rock-solid musicianship and attitude. During the time-span featured here they recorded seven albums and had a number of singles that nudged the bottom end of the Billboard Hot 100, though sadly they never really made the breakthrough in the Pop charts in their AOR dominated homeland. But as we shall see that was no reflection on the quality of their efforts.

Mother’s Finest aim was twofold – number one was to be able to go toe to toe with Parliament in the funk stakes and number two, rock hard enough to match the like of the MC5. Now this may have confused people who couldn’t handle more one idea at a time, but boy does it work, with some searing guitar lines from Gary Moore (no not that one, but listening to it, at times it definitely could be) and fine singing benefiting either mode. These were noble ambitions that they did well in fulfilling on their early material documented on Disc 1 here. From the first album, You Move Me is a beautiful, brittle jazz/gospel ballad adorned with some heart-breaking work from Kennedy, but Monster People which soon follows is a complete contrast, fast hard rock with a touch of RnB and even a little hint of prog. It’s as if Black Sabbath (who Mother’s Finest gigged with – I think I would have liked to have seen that, to put it mildly) suddenly decided that there was “always a Dance element” to their music.

Fire is one of the key tracks here, incendiary lava-hot rock & roll Detroit-style. coupled with some wonderful soul vocals – if you saw the re-animated MC5-DTK with Lisa from the Bellrays on vocals that will give you a good idea how this song sounds. As if to prove they could turn their collective hand to pretty much anything, there are RnB ballads with a touch of the orchestral (Living Hero), massive keyboard-led Funkers (Baby Love) and the sliding guitar of Mickey’s Monkey which gives Led Zep and Jimmy Page a run for their money. Plainly put, the first disc here is a riot.

Moving onto the later years (77-83) on Disc 2, this found Mother’s Finest in the midst of Disco but they barely deviated from their vision, while always willing to take new ideas in. The tough Soul of Truth’ll Set You Free and thunderous funk of Hard Rock Lover shows that their muse remained intact.

We do start to hear the influence of synths creeping in and they also take Jefferson Airplane’s Psych Rock classic Somebody To Love and give it a full-on funk makeover – shouldn’t work but really does. Included on this one is the entire One Mother To Another album from 1983 which only ever saw a European release and it’s an eye opener.

Yet again Mother’s Finest weren’t happy to just sit still and behave, even having a go at New Wave on Secret Service and What Kind Of Fool, even if there is more of a pop approach on display here. The rolling piano ballad Big Shot Romeo, a withering put-down to a “playa”, is again marked out by some great vocals (the singing is excellent throughout) and as if to prove yet again their sure hand and dexterity, they pull out some inspired cutting-edge Electro Funk on Everybody Needs Somebody.

After 1983 Mother’s Finest have continued onwards (with a few periods of down-time) right onto the present day still with four members of their original line up in Murdock, Kennedy, Moore and bass player Jerry Seay. Their latest album of new material came out in 2015 entitled Goody 2 Shoes & The Filthy Beast and they still haven’t relinquished their position of the premier providers of full-on funk rock.

We can now see they were clearly forerunners for “crossover” bands like Living Colour that came along later, but let us appreciate Mother’s Finest for what they were (and indeed still are), rather than what they may have inspired – a damn fine band that could make magic of almost anything.