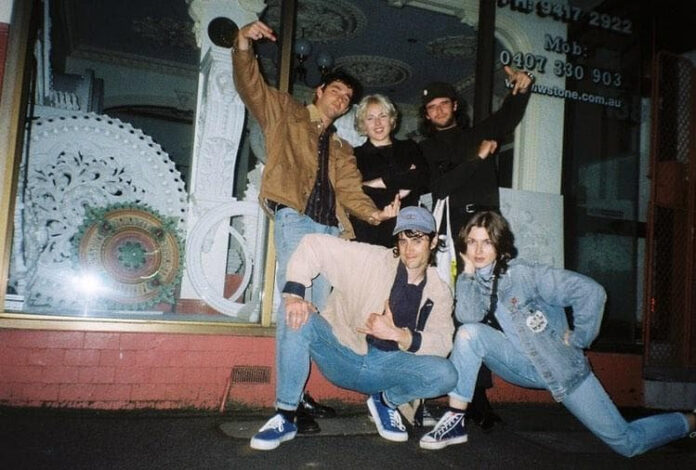 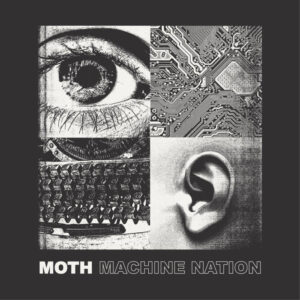 It snaps and ensnares and sandblasts the bones from the body and it does so in under twenty minutes. So it has to be punk – and it has to be Moth. It’s from Melbourne, not Manchester. And for some reason, this excites me. The idea of sunshine and ripped jeans and worn trainers and denim jackets making music this enthralling opposed to the archetypical raincoat and military model of weirdo post-punk seems to strike a contemporary chord with me.  I’m naturally drawn to anything described as ”technological, paranoid, discordant, robot rock’’ and this new 7-inch release never fails to deliver such a notion. The Nation of Machines, as seen from, and soundtracked by, Australian views.

The first fist in the face is Ritual. Imagine Wire covering Discharge, or Gang Of Four covering The Television Personalities. Its propulsive, industrial punk shuffle and spellbound, mysterious vocal squawks wrap themselves around the senses and rip them to pieces from the distant corners of some murderous room.  Sharpened, serrated edges of guitars, chugging, chopping, and splintering into the air to create a menacing, primarily live-feeling affair. Ominous and unstoppable, awkwardly disjointed and disturbingly robotic, all the while carried by an undercurrent of mischievous drums that dig holes into roads with every beat and bruise the muscles in all their vivacious tenacity. 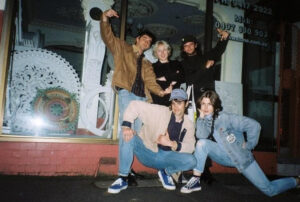 Similar features ensue with 2021. If Graham Coxon had played guitar with Black Flag and Greg Ginn played with Blur, I imagine this would be a pretty accurate representation of that scenario with its schizoid bounce, mutilated bass, and galvanised, angular athleticism. Veeka Nazarova provides the vocals for Jealousy: The Plastic Ono Band covered by the Fugazi. Or the Velvet Underground covered by a primitive Pixies. It’s a jagged jumble of jigsaw pieces somehow fitting into place despite the oddness of the image it creates thereafter. Fearless machines fitted with muzzles hiss, fizz, and explode into spacy, kraut motion. Splashes and slashes of bass noise blast forth, strangely evil yet seductively ethereal vocals float above the bed in acts of madness, and bloody, fuzzy electric guitars are dismantled and deconstructed in a showcase of fantastic strength.

Fair play to Moth for making music this good. For creating something ticking into that zone of lucid, wonderful youthful angst. Where everything is over before it ever really began and makes us feel invincible all the same. A total blitzkrieg of paranoid, wild details. Plugged in and wild, discordant, and cacophonous in how it revolts against the walls. By the time Indulgent Indeed completes the album, with its tough, techno bleeps and adrenalised, volcanic explosions of acidic feedback. Like a Jackson Pollock with fire in his belly, wielding a shotgun where a paintbrush once was, and before one realises the end has arrived; we’re back to where we started. At square one, subconsciously wanting to replay this amazing piece of contemporary, post punk slice of something else, all over again.

Follow and find additional releases by Moth on Bandcamp