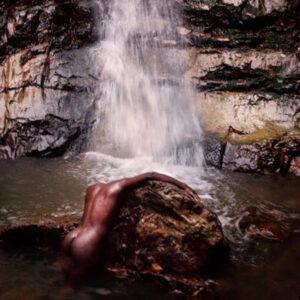 Moses Sumney evades definition. But one thing is certain, he writes sweeping, breathtaking songs and delivers them with the voice of an angel. His second album, Græ, is a sprawling, ambitious masterpiece worthy of close attention. Gordon Rutherford reviews for Louder Than War.

“Am I black or white/am I straight or gay?” Keen to emphasise his paradoxical nature and to confuse the hell out of a certain demographic of American society, Prince posed that question to the world in 1981. Audiences hearing him (and seeing him) for the first time struggled to answer those questions. Of course, ultimately, he was neither.

Now, almost forty years later, Moses Sumney has released an entire album that poses similar questions. The idea that something can be two things simultaneously is the very definition of græ. Black and white. Straight and gay. Right and wrong. Visceral and intellectual. As Sumney says, “too many of the terms of existence that rule our society are binaristic. Two options are not enough”.

Sumney refuses to be categorised or pigeonholed and he uses Græ to emphasise that quite clearly. The songs themselves contain many clues to the concept of one thing simultaneously having several meanings. Most obviously, there is Jill/Jack and Neither/Nor. The clue’s in the title. Then we have the spoken voice pieces of English writer Taiye Selasi, who proclaims “I insist on my right to be multiple” on the track Also Also Also And And And.

Sumney’s 2017-released thrilling debut, Aromanticism, now makes sense. The part-Californian, part-Ghanaian singer-songwriter introduced himself to the world with a minimalist, intimate classic that was incredibly difficult to categorise. It was neither this nor that, it didn’t fit snugly in any one particular box. Knowing how much consumers love genres, this ambiguity probably contributed to it receiving less acclaim than it deserved.

Græ also dwells heavily on another theme, one that is striking in these times of lockdown. Throughout, there are continuing references to the theme of isolation which he positions in terms of his own identity, sexuality and gender. Just in case anyone is missing the point, the opening line of the album, from the very first track, Insula, emphasises “isolation comes from ‘insula’ which means island”. Unless he is a soothsayer as well as an incredibly talented songwriter, this is clearly coincidental. But coming straight off the bat in the way that it does, in these strange times, it really makes you sit up and take notice.

Now, as we all know, artists who proclaim to have deep meaning, themes and subtexts are all good and well, but where’s the beef? It’s a bit like owning a fur coat, but no knickers. When it comes down to it, actual content is everything and aficionados of Aromanticism will not be surprised by the incredible scope, imagination and sheer wondrous brilliance of Græ.

As if to emphasise the either/or dilemma, its græ-ness, Sumney and his label, Jagjaguwar, have released the album in two parts; the first in February this year and the second in the past couple of days. This has made reviewing it a little bit weird, with the first twelve tracks like old friends and the remaining eight completely fresh. The two parts do feel quite distinct and separate. Part one feels more assertive, more confident. On the other hand, part two is stripped bare and comes from a very insular, solitary place.

Yet despite the different feel, holistically the two parts do seamlessly blend into one spectacularly ambitious whole. Græ is a double album of no fewer than twenty songs and Sumney makes each and every one of them count. It shimmers and it glistens. It’s a sprawling body of work that is adorned with a dazzling mishmash of crystal trinkets, all sparkling, yet as fragile as fine china. It is littered with ephemeral gewgaws and exotic objet d’arts. It shines and it dazzles, it screams and it whispers.

Musically, Græ is a sonic myriad of delights. But the thing we all turn up for with Moses Sumney is the voice. My God, that magnificent falsetto. Listen to Cut Me, and feel that moment ten seconds in when his voice swoops down over Adult Jazz’s bass. Find me a better vocal performance this year. I’ll wait.

Returning to the Prince theme (the comparisons are inevitable) Sumney’s ballads are so reminiscent of Paisley Park’s finest. In particular, Bystanders and Me In 20 Years remind me greatly of When 2 Are in Love (from Lovesexy) and Adore (from Sign o’ the Times) respectively. Comparisons with Prince are always dangerous, but in this instance, for these particular songs, it is merited.

Virile, the first single from the album, is Græ’s stand out track. Not only is it a magnificent piece of song-writing, musically it swaggers with self-confidence, driven on by a strict military beat, underpinned by guest star Thundercat’s bass. It is the bolder older brother in this collection, fronting up to the outside world whilst its younger siblings tread gently, wrought with introversion.

Then we have Colouour, a beautiful jazz-tinged torch song which is led in by the brilliant Shabaka Hutchings’s saxophone before providing the perfect showcase for the vocal. At points in the track, there is only Sumney’s voice. Nothing else in the universe exists.
The vocal highlight of the album however, along with the aforementioned Cut Me, is the exquisite Lucky Me. Musically, it sounds like something that Kate Bush would have written, with James Blake’s austere keyboard motif providing the most perfect platform for Sumney’s voice to soar to the heavens.

Græ is, in summary, a quite astonishing achievement. You won’t hear anything else like it this year. You won’t hear a more extravagantly astonishing voice this century. And for those true vinyl junkies out there, it’s also essential to call out the incredible packaging and design of the limited indies-only edition. Hats off to Jagjaguwar and Sumney for taking the time and trouble to invest in that. It’s not quite as critical as the music, but it matters.