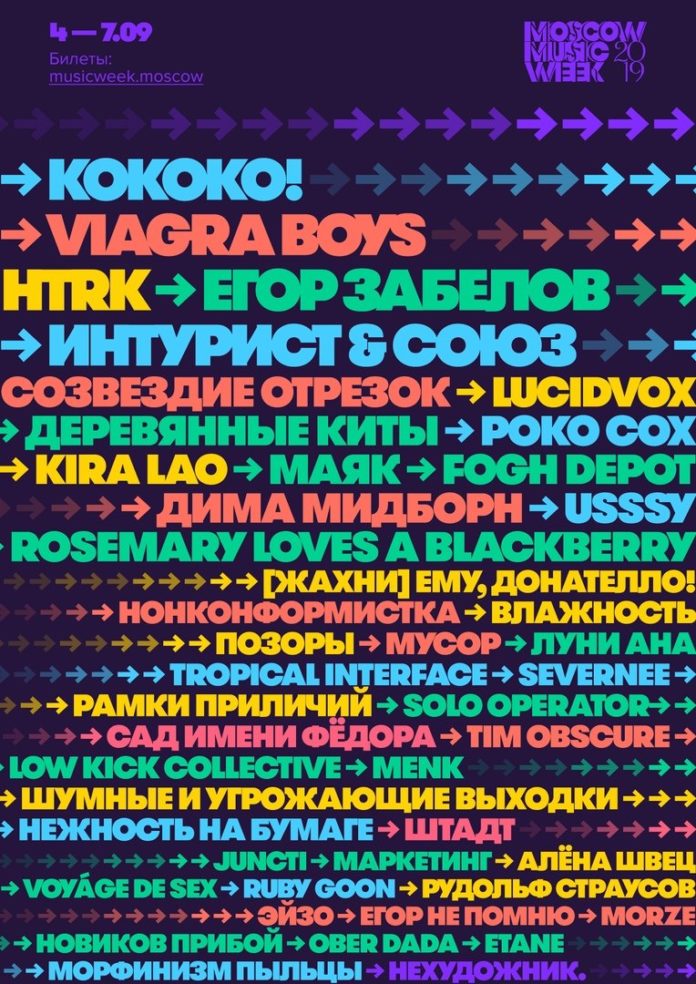 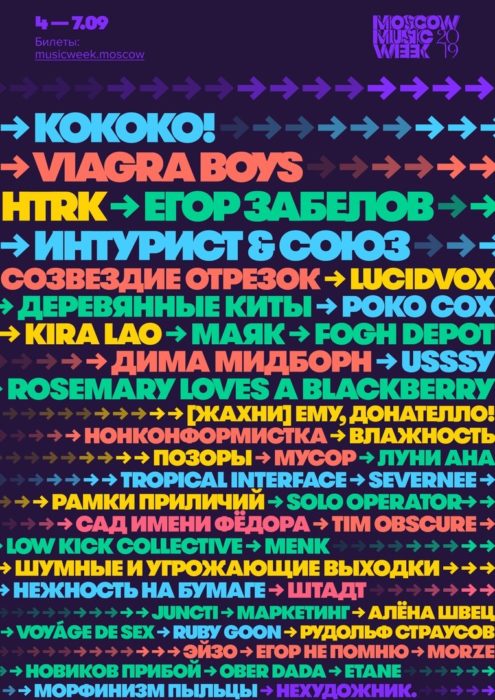 This years Moscow Music Week showcase event was the biggest yet. Underlining the depth and diversity of the fast rising Russian music scene that it is the prime catalyst for the event has become key on the calendar for anyone interested in new music as John RObb and his team discovered.

Like one of those famous Matryoshka Dolls there are so many layers to Russia that it’s a complex operation to even try and unravel them. Perceptions and realities move past fast in a confusing blur, especially in Moscow which is a city in a rush to the future.

What we do know is that we are spending four days at Moscow Music Week – a fast growing music showcase event that has been the key catalyst in the New Russian Wave of bands like Shortparis, Lucidvox and Glintshake who are beginning to make names for themselves on the European gig and festival circuit.

Russia is a country with many contradictions but it wears its heart on its sleeve in a way that the UK doesn’t, especially in our post Brexit meltdown where our snobbish high moral ground has been dashed on the rocks. The drift towards conservatism fights it out against progressive forces in arts and culture and music as ever is at the vanguard of a brave new world.

In modern Moscow there is a huge, sprawling music scene of many styles – there is the dark jazz that is deeply embedded in the Russian psyche, there is a sudden embrace of the smarter end of eighties pop, a big post rock and post punk scene and groups of all shapes, sizes and sexes out there representing. The Russian mainstream itself is on a confident high – many of the homegrown acts are singing in their mother tongue and Russian pop and rap are dominating the market place.

Moscow Music Week delves just below this surface delivering the kind of ground breaking bands that are rewriting the music agenda not only in Russia but worldwide and there is plenty of music in mother Russia that fits the bill.

With a vaulting ambition and talent for making sense of the disparate Moscow Music Week are at the heart of something very important culturally. A wave of bands that has the twin fold effect of underlining the country’s creativity and also breaking misconceptions about our mighty near neighbour.

2019 Moscow is nothing like the cliched stern version that many still believe it to be. A huge and youthful city full of hipster areas and music, it’s more like Berlin than the austere presumptions. Somehow, despite everything, the Russians have found a way to create a creative culture that is the equal to any of the cities in the West and they are speaking their version of the same language and without the vital conduit of Moscow Music Week most of this would be fractured and isolated.

This year Moscow music Week is the biggest yet with venues spread put across the huge city. Moscow is massive. A sprawling metropolis of endless high rise that goes on for 20 miles in every direction. Celebrating its 869th birthday the weekend that we are here, the city is a major player on the world stage now and matching this vaulting ambition is this years collection of bands.

Super Collection Orchestra are one of the highlights with their schizophrenic schizoid sound which starts off with falsetto vocals over a Talk Talk style eighties dark pop. The middle of the set slips into sinister Korg driven pulses that reminds me of Ulver – that appropriation of pop to create dark landscapes that the Norwegian band do so well. Super Collection Orchestra are captivating and this is a great set that shows, yet again, a genuine musical promise from the band and a real potential to be the next breakout on the New Russian Wave.

There seems to be a re-examination of eighties pop going on in the scene at the moment and Poco Cox are like an artful take on the form. I guess when any music decade is maligned enough people will always perversely grapple with its nuances and see if there is more there than meets the eye. Now its the turn of eighties pop served through meta pop and into another future. Poco Cox have an artful intensity about what they do and some of the almost Eno-esque filtered keyboards make this an interesting experience.

Poexxxali deal their warped electronic vision of sparse electro-wonk from the unlikely mysterious state of Turkmenistan or, as they term it Darkmenistan. There is an absurdist sense of humour about the collective and some interesting twists and turns in their pulsating weird.  Their off kilter performance with faces painted red and almost Aphex Twin style rhythmic pulsating is certainly different.

The wild and carefree creativity of Hadn Dadn is hooked around a very Russian sense of melody and the sparse piano driven backing somehow grapples with Beethoven like melodies over a postmodern drums and piano soundscape. It’s the same kind of vaulting ambition and originality that made Kate Bush such a thrilling arrival all those decades ago.

Rosemary loves A Blackberry deal a breathless and dark shapeshifting electro pop — all moody soundscapes and a moody discomfort..

It’s not all Russian bands though and the headliners tonight are Kokoko who hail from the Congo. This is a group I’ve wanted to catch up with for ages. Utilising the rubbish they find piled up high on their home city of Kinshasa streets they make a hypnotic and thrilling dance groove. The plastic bottles, tin cans and bric a brac makes a brilliant clattering percussion that, when combined with their electronics, is used partly as an ecological statement about the mess in their city streets and part necessity as they had no money for conventional instruments. The band deliver a set of typically polyrhythmic Congolese groove. Kokoko are a modern take on their home nations’ great powerhouse legacy of music. The Congo is the key musical nation of middle Africa and still drives the scene along despite endless civil war. The band are on fire and have this festival thing nailed with the audience eating out of the palms of their hands, dancing and singing along to a multicultural party.

USSSy https://usssy.bandcamp.com deal a dissonant genius, a mind-altering mind melt of huge sprawling guitar trips, middle eastern models and insane energy, this is a soundtrack to the modern times — a wild and free rush of sound that captivates. Tribal drum assaults, warped electronics and that feral guitar all combine to scorch the mind and the wall of sound is invigorating and life-affirming.

The Punk Fiction club is a perfect punk rock dive complete with skateboard ramps that everyone keeps tripping over there is a mighty bill of post rock bands from St Petersburg Weezdum are a bass and drums duo who command a mighty distorted dirty groove and one of those brilliant Russian drummers — there is obviously plenty of time to rehearse here. There is no such thing as a sloppy band — every group is like powerful machine. Weezdum deliver that kind of post rock, head nodding, grout groove and are fantastic at it.

Jars are a devilishly brilliant combination between Shellac’s dislocated grooves, driving bass and skull scraping rhythm guitar and a slice of the darker end of metal — it’s such perfect idea you wonder why no-one has done it before. The three piece thrill with a powerful post punk utilising the Albini method of linear noise but with all that use of space. Huge sound scapes are built from the guitar/bass/drums. A creeping insurgent uneasiness in this dark terrain. This is a crashing claustrophobia and a very intelligent use of minimalism and space.

Meanwhile across town in another venue,  KnightKnights are delivering their sharp and angular kinetic post-punk. The no wave duo who make a bass and drums sound like an orchestra. With the bass filtered through a bank of effects, the band never stand still for a minute and the amount of textures and sounds they bring to their high octane noise thrill is mind-boggling.

Avtosport are a rush of great ideas, glorious guitar noise but the kind of top-end melodies that the Killers have made into a stadium language. It’s great to catch up with Inturist again and their freak no wave punk jazz that more than soda at James Chance and the Contortions. The music is beautiful and angular and full of the energy of ideas.

Mak Sima Mgla deal out melancholic atmospheric American Rn B with moody keyboard backings creating beautiful soundscapes for their pop melodies.  They slice this with the  kind of sparse soundscapes of a Public Service Broadcasting. Atmospheric layers of speech and radio crackle  – all delivered in Russian that adds to the atmosphere.

Swedish post sleaze band The Viagra Boys are another key highlight and headline the closing night. They have spent a year on the road tightening their gritty genius to perfection. With a powerful rhythm section, they leave plenty of space for the droning sax and keyboards to add flavours to their gonzoid grind and their tattooed frontman somehow out sleazes the Fat White Family in a grubbier and more dangerous performance. He also has a great baritone voice and the musicality that is inherent in the group’s sound is key along with their infections dark matter groove.

In the large spread of venues and Moscow’s sheer scale mean that we manage to miss the great Lucidvox but we are still happy to underline just how great this group is with their mix of post-grunge, psychedelic and Russian folk melodies remaining as captivating as when they first appeared on the radar as a key cornerstone of the New Russian Wave.