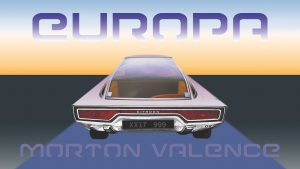 Before I explain to you why you should get this new Morton Valence record, I want to tell you a couple of stories. First; I recently saw a tweet directed to the contentious Dutch alt-right journalist (doubtless to drum up some sympathetic response) Joost Niemöller; bemoaning the fact that even the Dutch are speaking English to each other in Amsterdam. Some days later, I was sat in a pub talking to a plasterer from Bishop Auckland, who said the same thing, about sleepy old Leiden, the lovely city I live in. In the words of John Lennon, I had to laugh. Fellow expats attempting to speak Dutch in the Randstad may sympathise; as the very idea of  trying to speak the native lingo in the big cities is – unless shit gets really serious and you need to claim your taxes back – a waste of time. Normally this can be explained on one level as a Hollandspropaganda take on traditional Dutch courtesy. And a simple need to show they have mastered English, and use it as Latin was once used; as the lingua franca. But to each other? I sense a tectonic shift. I predict most of Europe’s major centres will be speaking this weird, sloppy, “groovy” version of English soon.

My point, though, is this. Right at the point when Euro-English (with its clumsy Americanisms and rampant, thoughtless mangling of the original, “Queen’s” version) is about to take over, the British vote to get out of the European Union; another international binding agent with vexations and vagaries aplenty. Call it symbolic. There is nothing else really to say as – in an increasingly uncertain world – symbolic arguments are all we seem to have to hold on to.

This record by Morton Valence is symbolic too. From the name, to the song choices, to the method. And a symbolic exercise in nostalgia? Maybe. I suppose I could draw an ironic point out about the fact that seven languages are present in celebrating a continent currently reexamining its relationships with the world, and with its component parts. So, on one level this record is – with its celebration of European pop music of the 60s and 70s – an LP to be sung at the wake of an idea. There’s nothing to hold onto really, except great versions of classic pop songs back from when the EU seemed the future.

But it’s more than that. It highlights – however incidentally – that there is a battle taking place. That battle has very little to do with Europe or the EU; it’s about the idea of what constitutes British romanticism and what counts as the accepted version of British history in the C21st. And the battleground is in British minds. Court versus Country. Fops versus Thickos. All of them shouty snowflakes. Forget the Europeans, they are a sideshow in all of this. Fog in the channel! Continent cut off! I come from a place that voted out, and many of my friends stand firmly behind Brexit. What use is freedom of movement if you can’t afford a train fare to Manchester? I get their arguments. And I have much sympathy, too. But as with so many things in the country, arguments in Britain take place on a stage, or on phone ins, or in people’s Twitter feeds; and passion or eloquence or takes over from cold reason. We surrender cold calculations to the international banks. And in that respect this LP is also a glorious oddity. A beautiful, wan, irrelevance.

I once saw Morton Valence play Sailors (which they revisit here as a sort of lament) in a London pub ten years ago. The brilliant, “lost” Dutch band, Appie Kim played what was their first, or second gig in support. It was a different Morton Valence cast back then, I think they still had their keyboard propped up on an ironing board. What a lost world the mid-2000’s is, in retrospect. The steady erosion of assumptions this last 10 years or so has been remarkable. And as such, Morton Valence (still the same beast despite the line-up changes) have an untrendy whiff of stability and generosity about them. They act out their pop on Europa in the same manner as Tolkien’s High Elves; moving steadily to the Grey Havens.

By the way the music is ace, with some glorious takes on Euro pop giants such as Gainsbourg, Kraftwerk, Deprijck and Dalla. There are too many highlights from a band who can both play and appreciate the European scene (they once crashed on my floor, don’t you know). And most importantly, it just goes to show you don’t need to know what the hell you’re singing about to love the pop song. Music being, of course an ever-shifting binding agent for each and every one of us.