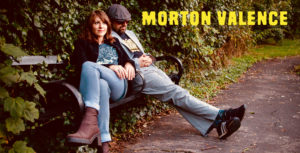 So it came to pass that Hacker went to Spain; like Steve Bent, but for a longer time than a quick two week break. Anne Gilpin’s turned up on his doorstep clutching a bottle of red and some Eurocheese. What could go wrong?

This emigration is relevant to mention in this review, because somehow these new songs feel washed up; not as in the sense of being old or redundant, far from it. But washed up on another shore, in another time. Happenstance as the muse. Maybe the stripped down nature of them is the key here. The rip-it-up-and-start-again sentiment heard on opener It’s ‘A New Morning’ certainly adds to this feeling. As does the snatches of ‘Sailors’ in ‘Goldenlights’. As they sing on the latter: “where is that Indian Summer that you promised me?” Indeed.

Morton Valence are a timeless act, they could continue for another 30 years with no one noticing any change, akin to the mysterious Count St Germain, popping up all over Europe with nary a greying hair. That is a strength for sure, but also one that plays against them. Their timeless music will never be of the moment, gloriously simple but poignant tracks like ‘Pretty Little Crystals’ and the tremendous Anglo-Celt ballad, ‘Maybe We Could Go Downstairs and See?’ will always be playing out their genius in the wings.

Stealth, then is Morton Valence’s weapon. Their songs are always – at some point – direct questions hidden away in a story, such as ‘Start Me Back Over Again’. Often the question is, like many great folk ballads, what is to become of me? In this manner (and if you succumb to thinking about them) tracks like can stop you dead. John Barleycorn is just around the corner at times.

Why this record also reminds me a lot of Robyn Hitchcock’s Eye is another matter. Maybe they share the same sense of remove, of bittersweet melancholy, the sense that singers are looking back at their songs as they sing them. Things pick up in pace and volume near the end, and we get a final angry send off with the cod-pop of ‘Mr Whippy’. It’s an idiosyncratic ending to a lovely album, but reminds us that you can never take this band for granted.