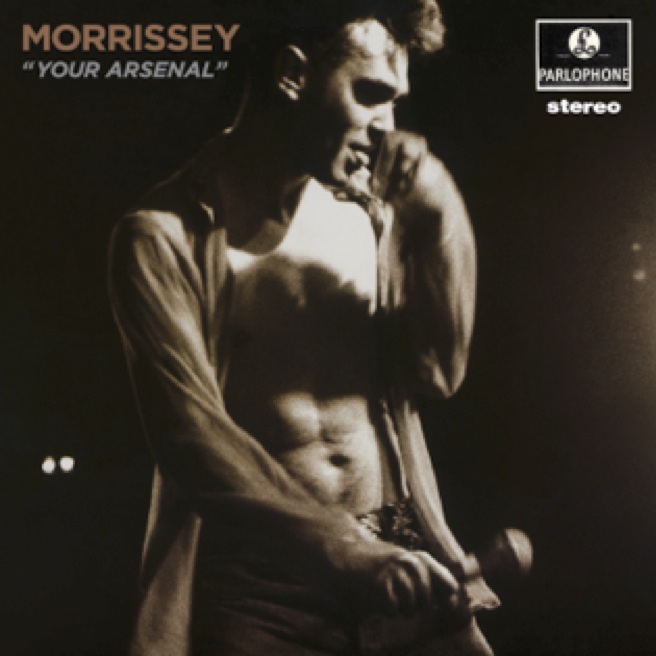 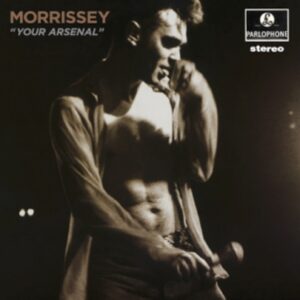 Your Arsenal, the album that broke Morrissey in the US, has just been reissued by Parlophone Records. Fergal Kinney looks back at this undisputed, career defining masterpiece by placing it both in its time and in Morrissey’s body of work.

Despite having just released by some distance the weakest album of his career, Morrissey had more reasons than most to be cheerful at the tail end of 1991. Having finally broken his post-Smiths near exile from the stage, Morrissey found himself in possession of not just a thundering band of London rockabilly toughs but of two uniquely gifted songwriters – Alain Whyte and former Polecats guitarist Boz Boorer. Co-written mostly with Whyte, Morrissey’s first album with this new band, 1992s ‘Your Arsenal’ would become one of the most praised albums in the Morrissey canon and certainly the album that would mark Morrissey’s arrival as a fully formed solo artist outside the Smiths’ long shadow. Defiant, stomping and not shy of controversy, the best moments of ‘Your Arsenal’ are amongst the best moments of Morrissey’s output, some five years after the split of the Smiths saw many call last orders on Morrissey’s career.

Etched into the run out groove of the Smiths’ single ‘Bigmouth Strikes Again’ was the maxim “talent borrows, genius steals”, an Oscar Wilde quip that goes some way to explaining the more light fingered moments on this album – indeed, ‘Certain People I Know’ is a wholesale cribbing of T-Rex’s ‘Ride a White Swan’, whilst ‘I Know It’s Gonna Happen Someday’ descends into the coda from Bowie’s ‘Rock’n’Roll Suicide’ with heartbreaking effect. Though Morrissey’s newly formed band were assembled from the North London rockabilly circuit, glam rock would provide the key touchstone on ‘Your Arsenal’. By way of musical and lyrical inspiration, ‘Your Arsenal’ couldn’t have been more indebted to early seventies Britain if it was going out on strike in platform boots, and it would be one British seventies icon in the form of former Bowie guitarist Mick Ronson that would give the album the bite and depth that had so far been absent from Morrissey’s solo output. Northern, glamorous, a Spider from Mars and a bruiser from Hull; Ronson’s contributions as arranger and songwriter (often unaccredited) with Bowie and on Lou Reed’s seminal ‘Transformer’ album were the work of a virtuoso, and the expert flourishes of Ronson as a producer and arranger are as evident in ‘Your Arsenal’ as they are in any of his work. Sadly, ‘Your Arsenal’ would prove Mick Ronson’s swan song, as less than a year after its release he lost his short battle with liver cancer aged just 46.

From the first swell of guitars on album opener ‘You’re Gonna Need Someone on Your Side’, it’s obvious that business as usual for Morrissey this is not. The nine-parts-Jean-Genie stomp of ‘Glamorous Glue’ is complete with wailing feedback, guitar solos and a low in the mix spoken recital of the chorus of Frankie Valli’s ‘To Give (Is the Reason I Live)’. Once unthinkable of Morrissey, even the Jam would prove a strong influence on ‘Your Arsenal’ – just a year earlier Morrissey had released a cover of ‘That’s Entertainment’ and the influence is stark on the album’s two top twenty hit singles ‘We Hate It When Our Friends Become Successful’ and ‘You’re the One For Me, Fatty’. The release of ‘Your Arsenal’ would be dogged by a controversy that Morrissey would find forever hard to shake off, regarding one of the album’s strongest tracks – ‘the National Front Disco’. Though the song itself raised a few eyebrows, there was little in it to suggest the song promoted any racist ideology. As a character study of a young working class male defecting to fascism, Morrissey’s quoting of the NF slogan ‘England for the English’ is sung in a markedly mocking tone, as too is his interrogation to the protagonist of whether ‘the thunder is ever really gonna begin’. Alas, Morrissey’s somewhat surprising appearance at Madness’ ‘Madstock’ festival in which he at one point flailed a union jack flag, and sang against a backdrop photograph of two skinheads, led to charges of ‘flirting with fascism’ from the same paper that was once dubbed ‘the New Morrissey Express’ for its once unfaltering support of the former Smiths singer.

For my part, the controversy surrounding ‘the National Front Disco’ carries much of the whiff of wilful misinterpretation and ignorance of nuance – ‘The National Front Disco’ is a marrying of Morrissey’s dual fascinations with peculiarly English phenomena and a certain form of masculinity. From this Morrissey’s affection for skinheads derives, a unique subculture as English as the Carry On films from which the album’s double entendre title could easily have been plucked. Indeed, Morrissey’s observations on his native Britain are at their sharpest on ‘Your Arsenal’ – the tongue in cheek “we don’t vote Conservative because we never have, everyone lies” of ‘Glamorous Glue’ especially apt coming months after the British electorate confounded consistent polling and opted for the Tories once more over Labour.

It isn’t all Chicory Tip and Dr. Martens however, ‘Your Arsenal’ at times provides a sonically clever listen with shades of experimentation often ignored in assessment of Morrissey – not for nothing did David Bowie cover ‘I Know It’s Gonna Happen Someday’ on his 1993 album ‘Black Tie White Noise’. ‘We’ll Let You Know’ is ambitious, expansive and gets its best trick in last as Morrissey dulcetly intones about being ‘the last truly British people you’ll ever know’ amidst a fading taunt of penny whistles and distant military drums. Whilst crippling solitude and isolation may not be new lyrical terrain for Morrissey, on the ethereal late night waltz of ‘Seasick, Yet Still Docked’ they have never before had a musical accompaniment quite so intense and fitting.

Boz Boorer continues to play guitar for Morrissey’s band, and Alain Whyte would write for Morrissey until 2009s ‘Years of Refusal’, with the ‘Your Arsenal’ band’s Spencer Cobrin and Gary Day making fleeting appearance across the albums that followed. Though ‘Your Arsenal’ may have marked the point when Morrissey’s relationship with Britain (and its press) began to sever, ‘Your Arsenal’ would cement his increasing stature in the US and earn him a Grammy nomination as well as significant radio play. Whilst the Smiths are now, quite rightly, hailed with more reverence than ever, ‘Your Arsenal’ stands as one of the strongest moments in Morrissey’s entire career and then, like now, his next move couldn’t be more speculated.

Morrissey’s official Facebook page is here. Also check out the True To You “Morrissey Zine”: true-to-you.net.