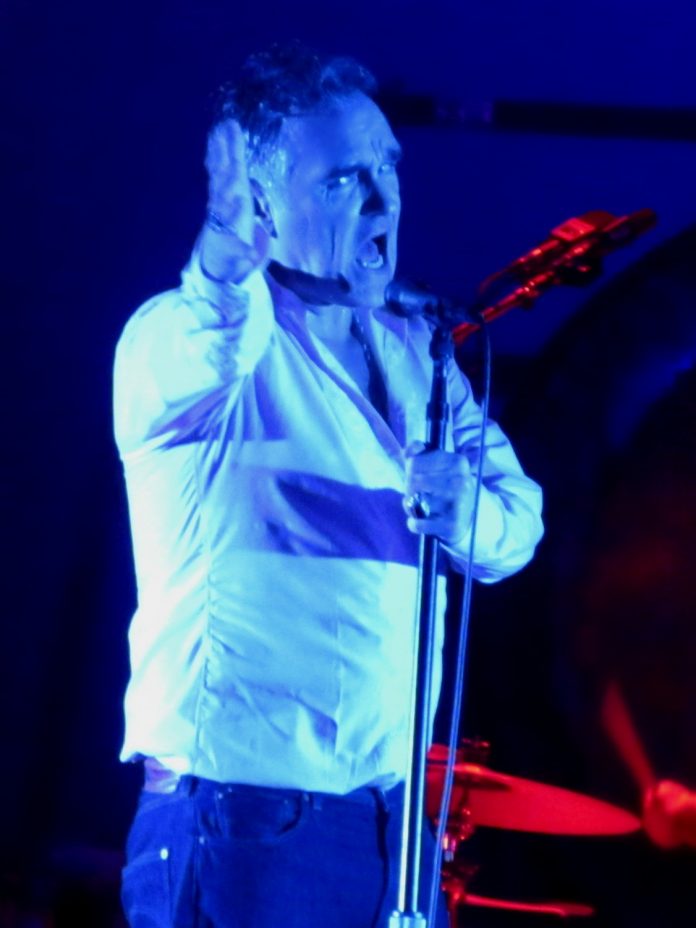 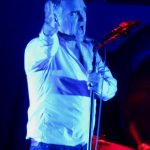 What is so seductive about Morrissey?

The vanity, the polarising stances, the often disturbing audio-anatomy lyrically graphic , visceral and soaked in profundity. He’s dark, light and all shades in-between, a fiend who’ll find the desires, aggressions and violations in the corners of your mind and billboard them. There maybe times you can exit into a vacuum separate from his politics, his social and economic elucidations but he’ll kick over the stones you use to hide dark thoughts you care not to share and halogen them with just a touch of gaudy showmanship.

So how has Morrissey allured for 30 years ~ human perversity, public exculpation, our personal inabilities to make narcissism and lusus naturae look and sound that fucking great.

Church bell’s peel out, bounce from right to left as Morrissey and his band wearing ‘Assad is Shit’ t-shirts amass on the Zepp stage to deliver a chorus line bow ~ and as the latter take to their instruments Morrissey is parading. His body is bolt straight, fingers contorted and jaw granite set. Imitating the convulsive rigour of E.S.T. he spins and jerks around as the potent intro to ‘How Soon is Now’ fills the room ~ crooning droll whines as arms are held in a gesture of desired contact, as he whistle Morrissey slowly, deliberately takes the mic cord looping it , places it over his head and tightens “and you go home and you want to die”Â the texture of want and disappointment saturating each line.

‘English Blood Irish Heart’, ‘You Have Killed Me’ and an impassioned “Alma Maters’ each delivered flawlessly with bombastic grrrr and saucy intent.
“I’d like to sing a song about a very beautiful place, it’s called ”Â¦. ”Â¦..try again. Scandinavia”Â he is all gesticulated arms and direct eyes, a balladeers song with its lyrics oblique and drums heavy, it feels like a rest point, have we breathed since those church bells?

The lugubrious guitars of ‘Meat is Murder’ are almost lost in the sensory overload of the video back screens footage ‘Meet Your Meat’ it introduces “It’s sizzling blood and the unholy stench”Â sneers the man, the audience is near unmoving, near catatonic watching or watching through the slaughter on screen.

“Let Me Kiss You’ deep throated, demanding, knowingly sung “let me kiss you, Let me kiss you”Â as he pulls of his shirt and stands eyes shut arms above his head, he turns flings his shirt to the crowd and leaves the stage. Fresh shirted “I’ve been travelling all over Tokyo, seen many incredible, historical shrines and beautiful buildings. The most historical of all the most beautiful we should all treasure ”Â¦.. Tower Records”Â ~ ‘Ouija Board, Ouija Board’ (oft slated) bristles with gleeful morbidity its muscular, dynamic and thick as it rises and falls, and as Morrissey wraps his arms around his body the song concludes with Matt Walker using giant taiko drums to end.

“Do you think anything will save the people of Syria? No, well your very wise because nothing is saving the people of Syria, shame. I am trying to say something intelligent. It is a shame that something like the United Nations doesn’t exist because it doesn’t does it?”Â the audience applauds and with a hand aloft “arrrh Tokyo ”â€œ Samurai”Â says Morrissey all grins again.

“Last night I dreamt, that somebody loved me, no hope, no harm, just another false alarm”Â its the man and his voice the turbulence of sweeping strings and weary guitars are inconsequential, Morrissey moves from using the mic stand as a physical crutch to hold on to to enveloping his body with his arms tightly while spinning back from stage front to flinging arms open with hopeful abandonment and back to soul deteriorating realization. Seemingly allowing the song to slide off him Morrissey peruses the audience ”â€œ ‘Morrissey’ several people shout “What, what’s happened to you? Are you in trouble? Do you need money?”Â he pauses as the sound from the band enters our consciousness and he beautiful sings the opening lines to ‘Please, Please, Please Let Me Get What I Want This Time’ he slides to his knees as the band continue the soporific melody, Morrissey rises and bows.

As everyone returns to the stage for a single encore, Morrissey drapes a NisshÃ…Âki flag around his waist, a quick bow ‘Still Ill’ a lyrical humour fest with it’s jovial chords and marching band drums, if we must finish it seems here is a high place to do so and as Morrissey rips off another shirt there is a flash of flesh, the music is silenced and the stage is empty.