Home Music Reviews Album Reviews Morrissey: World Peace Is None Of Your Business – in depth album... 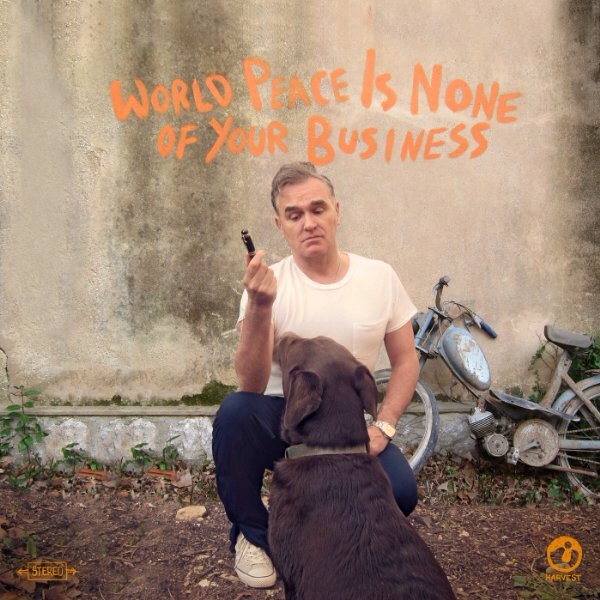 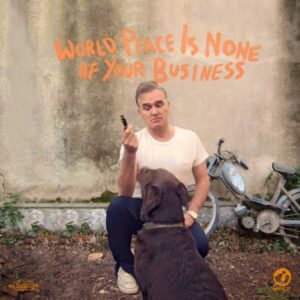 Morrissey – World Peace is None of Your Business (Capitol / Harvest)

Download: ‘I Am Not a Man’, ‘Istanbul’, ‘Staircase at the University’, ‘Smiler With a Knife’.

AS ANYBODY with access to a stereo since 1984 can vouch for, it isn’t easy being Morrissey. In the five, long years since ‘Years of Refusal’, that’s been truer than ever thanks to the best efforts of a bleeding ulcer, Barrett’s oesophagus and double pneumonia. With extensive touring plans continuously halted in their tracks, and by his own admission there being more chance ‘of being struck by lightning’ than going back to the day job and finding a record deal, it hasn’t been easy being Morrissey, and the ever increasing list of tour cancellations and foot-in-mouth soundbytes read like an obvious prelude to retirement. Last year’s ‘Autobiography’ managed to reverse these fortunes; causing the perfect balance of delight and offence central to Morrissey’s career, and no sooner than you could say ‘bestseller’ was Morrissey granted a two-album deal. What a difference a Penguin Classic makes.

Recorded earlier this year in France with U2 and Strokes producer Joe Chiccarelli, ‘World Peace is None of Your Business’ is perhaps Morrissey’s most eagerly anticipated release since his first solo album ‘Viva Hate’, but is that where the comparisons with some of Morrissey’s best work ends? Morrissey has gifted more than enough ammunition to his detractors over the last few years. ‘World Peace is None of Your Business’, an album from a distance so likely the punchline in a Times columnist’s joke, is none such friendly fire.

From the outset, it’s clear that this album is a departure from the guttural dirge of Johnny Thunders guitars that for many marred (no pun intended) 2009’s ‘Years of Refusal’, the title track opens the album with enough twinkling grandeur to suggest something very different. It’s the political sentiments, though admirable, that weigh the song down. “Each time you vote/you support the process” is the refrain at the song’s end, as if staying at home on polling day is what really gives a kicking to the war-lusting politicians at which the song swipes. Anyone who has seen Morrissey over the last five years will recognise the high drama present here, and across the record Morrissey’s band truly excel themselves, something for which they deserve full credit rather than being pilloried for having the barefaced audacity to not be the Smiths. Only the Gustavo Manzur penned second track ‘Neal Cassady Drops Dead’ sounds akin to this album’s predecessor, and whilst a comparatively weak track to air so early in the album, this beat poet referencing track offers a clue as to where the rest of the record will go when it takes a leftward turn halfway with flamenco guitars.

‘I Am Not a Man’, begins with a bemusing minute and a half of scarcely audible studio whirrs, but within seconds of Morrissey opening his mouth this is forgiven and forgotten. As synths wooze and fizz from every orifice, this soaring, seven minute shopping list of arcane masculine faults is Morrissey firing on all lyrical cylinders, bold, well observed and entertaining in equal measure. His conclusion, “I’m something much bigger and better than a man”, may be a bit vague for the next census form, but it’s the first point on the album that suggests the album to be something to rival his best work – not least when he turns the gun onto himself, the “wise ass, smart ass workaholic”. From hereon in, the album really enters full throttle, and that the momentum at no point dips from this track onwards across an album of this length (clocking in just four minutes short of an hour) is telling of how much this five year recording hiatus has sharpened Morrissey’s writing and editing process. Indeed, in direct reversal of the last few Morrissey albums, even when the lyrics are a little hackneyed, as on ‘Earth is the Loneliest Planet’, the music is exciting enough to keep the track afloat.
Where half of the tracks on ‘Years of Refusal’ had titles including the words ‘I’ or ‘me’, this album is a much more observational and worldly effort, and a more well rounded listen as a result. Two of the strongest moments on the album are character studies; ‘Istanbul’ is a breathless vault across the city through the eyes of a widowed father, snatching glimpses at prostitutes and street gangs amidst the noise and bustle. Borrowing a chopping groove from early b-side ‘Jack the Ripper’, it comes from the same fixation with lawless outcasts on the margins of society that has peppered Morrissey’s lyrics through the last thirty years, and is every bit as enthralling as the Rusholme ruffians he documented in the 1980’s, or East End gangsters in the 1990’s.

The second such character study, ‘Staircase at the University’ sounds quite unlike anything Morrissey has done before; rhythmically insistent glam rock with an intoxicatingly pop vocal line, not since the Shangri La’s has a story of teenage death been so danceable, complete with handclaps, strings, school whistles and a dash of high camp. Like Alan Bennett, advancing years have given Morrissey a new ease in confronting affairs of the flesh without the distance of the third person, never has this been so direct as on the delightful ‘Kiss Me a Lot’. No longer backwards in coming forwards when it comes to hanky panky, be it in “stockyard, church yard, your mammy’s back yard”, he’ll take it.

Fear not, single reader, that Morrissey has become doe-eyed with romantic zeal – the man who once sang ‘Will Never Marry’ still views relationships very much at arms length with suspicion and pessimism. “Sex and love are not the same” offers Morrissey on the seething and brilliant ‘Smiler With a Knife’, a message echoed in ‘Kick the Bride Down the Aisle’. A modern update on ‘William, It Was Really Nothing’s cautionary tale of matrimonial entrapment, it’s a brooding and cinematic warning from the back of the registry office. Kristeen Young’s backing vocals add a haunting dexterity to the track, as on ‘Earth is the Loneliest Planet’, but don’t expect any further collaborations – Young has achieved the rare feat of managing to become persona non grata with Morrissey in the short space between recording and releasing this album.

Though the album benefits from Morrissey casting his net wider than himself, there is a truth to Morrissey’s lyrics – and indeed his autobiography – that one’s enjoyment of them depends on quite how fascinating you find Morrissey himself. ‘Mountjoy’ and ‘Oboe Concerto’ really work as a couplet, ending the album on two sides of the same coin; reflective, pensive and occasionally quite revealing. “A swagger hides the fear in here” is a bold admission, allowing a vulnerability absent from his later solo work, and ‘Mountjoy’ is all the stronger for it. Based on the grim Irish prison that housed Brendan Behan – who is referenced in the track – Morrissey scholars will also note that it’s ‘Mountjoy’ that contains this album’s obligatory post-Smiths-court-case reference to a judge, complaining of being where he is today thanks to a “three foot halfwit in a wig”.

The vocal performance Joe Chiccarelli gets from Morrissey is better than with perhaps any other producer, leaving it high in the mix where it belongs. As with Michael Stipe, Morrissey’s voice has improved with age at a rate that perhaps overtakes his material. ‘Oboe Concerto’ has much in common with ‘Death of a Disco Dancer’, though the subject matter couldn’t be much more different. Mortality and death have loomed large over Morrissey’s lyrics since the first Smiths album, but ill health and old age have made these concerns very real, as noted when he croons “the older generation have tried, sighed and died, which pushes me to their place in the queue”.

Has there been a Morrissey album since ‘Vauxhall and I’ that hasn’t been granted the easy moniker ‘return to form’? Now, as when it was said about ‘You Are the Quarry’, that cliché is very much correct. Of course, ‘World Peace is None of Your Business’ does lack the crossover Radio 2 appeal of ‘You Are the Quarry’, but it does offer something more enduring to the listener, wholly rewarding of repeat listens and multi-textured not just musically but lyrically. There is the occasional misfire; the title track’s warning that police ‘stun you with their stun guns’ sounds as clunking as it reads – what else could a stun gun do but stun? Equally, the wordplay on the otherwise exquisite and brief ‘The Bullfighter Dies’ can feel slightly laboured, but they detract little from what is certainly one of Morrissey’s defining records as a solo artist. ‘World Peace is None of Your Business’ is significantly better than a cursory look at the last few years of Morrissey would suggest, and for the first time in a decade Morrissey has put together an eclectic, daring and sometimes surprising listen. The day job, we hope, is where Morrissey will stay for a while longer.