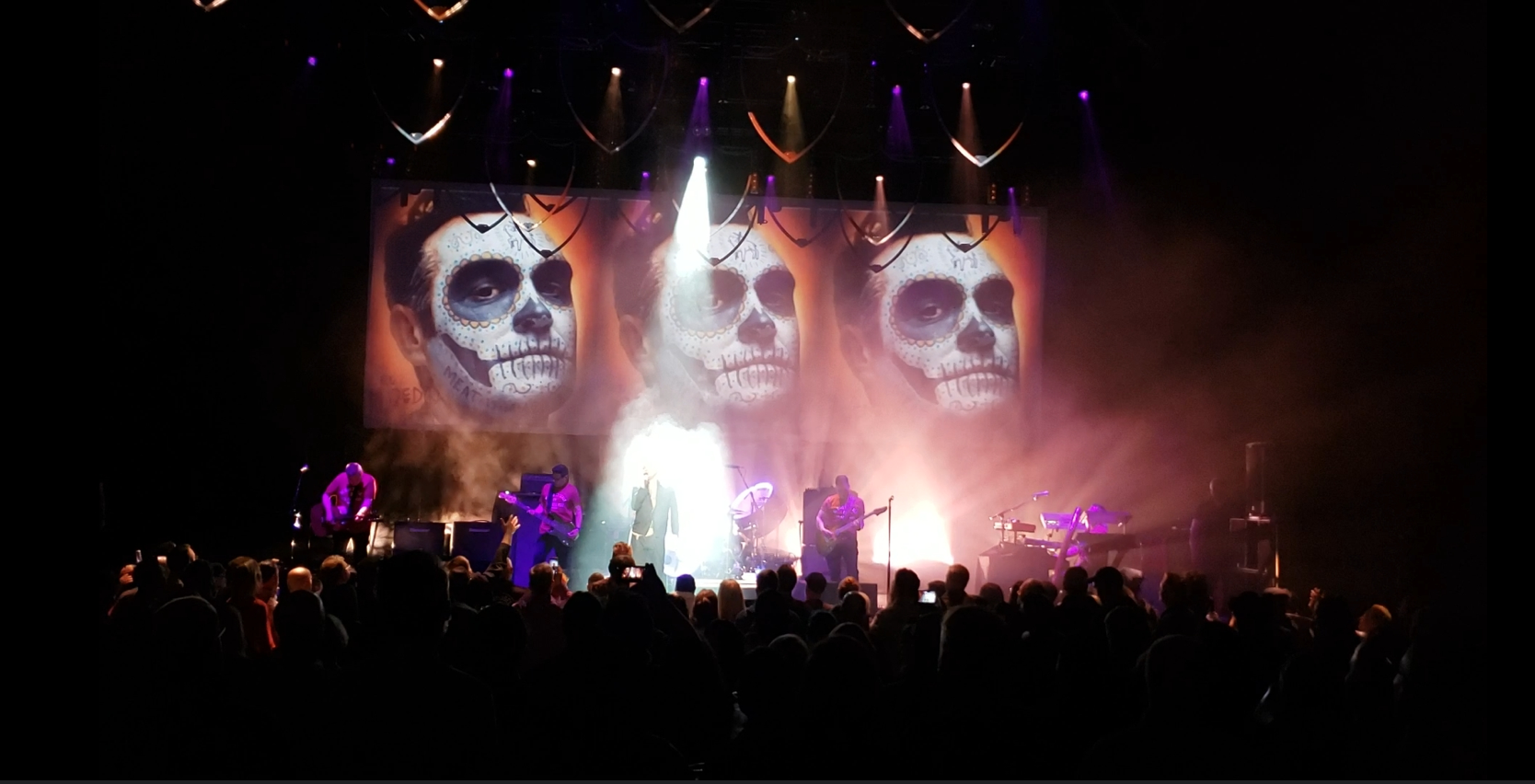 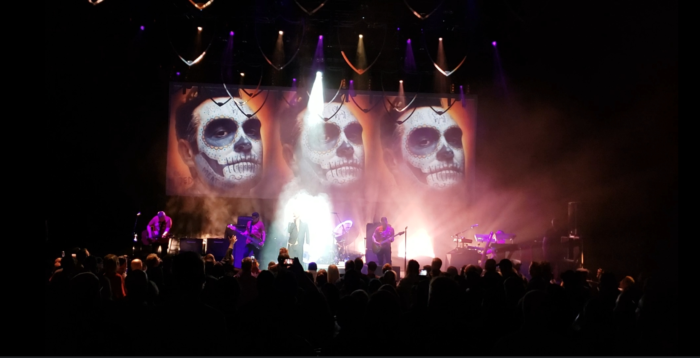 Toronto Threw its Arms Around Morrissey

After a long, dry, 15-year boycott of Canada protesting the seal hunt, Steven Patrick Morrissey played his first of two Toronto concerts on April 26, 2019 to a sold-out crowd at the Sony Centre, the audience gloriously free of their forced abstinence and ready to revel. Foregoing an opening act, Morrissey chose a 35-minute slide, music and film clip show, mostly in black and white, covering diverse performances such as the Ramones, Edith Piaf, Italian rockers Giuda, Patti Smith singing on the Old Grey Whistle Test, Lenny Bruce, David Bowie doing “Rebel, Rebel,” an Alain Delon movie scene, and more. By the time he took the stage, the venue was full, and the audience primed.

The lights went up illuminating colourful pictures of a man in skeletal make-up. The five-member band sported red T-shirts from the merchandise catalogue that declared, “Be kind to seals or I will cull you,” and the Mancunian himself had donned a Morrissey T-shirt with a Canadian animal motif (moose, bear, goose and seal) under a jacket. He went into a brief acapella rendition of “My Heart Will Go On.” Then, the band and the light show erupted like fireworks with “Suedehead” followed by audience cheers. It was a fitting start – the first single of his solo career opening his first Canadian concert after a long absence. A new beginning. Morrissey’s steady and sure baritone lead the chorus as the audience enthusiastically sang along. In what would be a trend for the evening, he altered his song lyrics and accented his misery. He sang, “You had to sneak into my room, just to smell … the GLOOM” instead of “just to read my diary.”

Morrissey has scored his feelings of alienation, rejection and yearning for love over the course of his career. He may be the “son and heir of a shyness that is criminally vulgar,” but when he was performing, he was in control: twirling the microphone cord; meandering; making expressive hand motions, sometimes like a magician, to punctuate what he was singing. In a rare interview he had given to Larry King in 2015, he said the only time he feels happy is when he is on stage. That could be because he feels much-needed acceptance and love in the energy that comes from the audience and it was definitely in the Sony Centre. 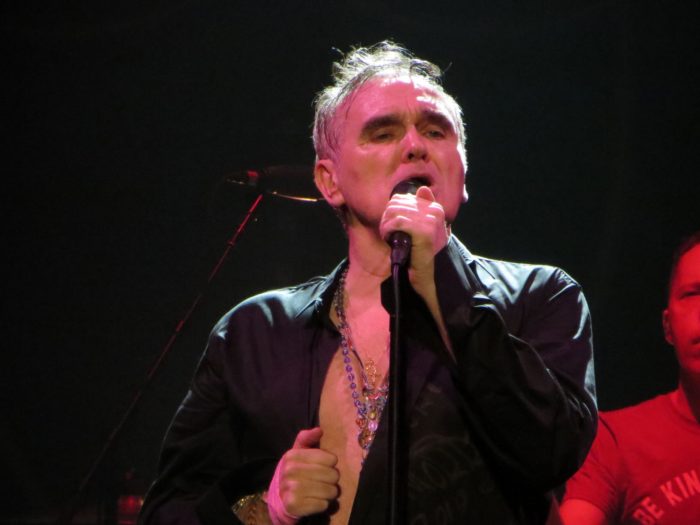 Morrissey led the audience like a conductor through the symphony of his set list – up, down, fast, slow, loud, soft, old, new. During “I’m Throwing My Arms Around Paris,” as he sang, “in the absence of human touch” many spectators strained their arms to touch his hand and he teased them by holding his hand above their reach.  During “Hairdresser on Fire” he changed the lyrics to “When he said I’m going to screw you,” instead of sue you. “So much for London, home of the crass [instead of brash], outrageous and free. I am depressed, but I’m remarkably dressed. That’s all I need.” [Changed from “You are repressed, but you’re remarkably dressed. Is it real?]

There was a stowaway, a very young boy with headphones, whose hand Morrissey took as he sang and walked the stage with briefly, before guiding him to exit stage left. A woman hoisted herself up on the low stage right in front of the depressed dandy offering a bouquet of flowers. A security guard was immediately beside her. She was allowed to make the offering to her God and return to the lower plane of humans.

As he was wading in the emotional mire of “How Soon is Now?” Morrissey changed the lyrics to “You see I’ve already waited too long, and most of my life is gone!” He kept punctuating it with “No! No! No!” while turning his back to the audience and bending, it seemed, in anguish or excruciating pain, and later calling out, “Help me! Help me!”

Before covering “Back on the Chain Gang,” he leaned into the mic stand and said, “I’m a very cosmopolitan person. I am a Christian [wearing a cross among other chains]. I’m very well-travelled. I’ve heard of Faith Goldy.” Mixed reaction from the crowd. Goldy is a right-wing former journalist and mayoral candidate.  “So have you. I said I’ve heard of her. Never met the woman. And that’s it.” Segue into “Chain Gang” during which he sang, “Nobody wants my love. Nobody needs my love.”

He performed “If You Don’t Like Me, Don’t Look at Me” and ended it with “Don’t get your knickers in a twist!” There was also his rendition of “Wedding Bell Blues” from his upcoming covers album California Son, sounding like he really was pining for the Bill the song was directed to. His animal activism was not overlooked during the evening. Besides having PETA in the venue’s lobby with pamphlets, vegan starter kits and petitions for those interested, Morrissey added “The Bullfighter Dies” to the evening’s roster. 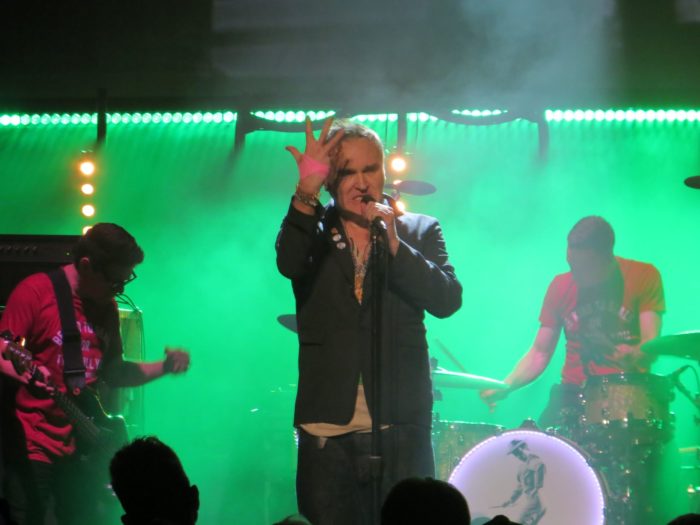 He addressed the assembly saying, “If you happen to have friends in Vancouver, Calgary, Edmonton, or Saskatoon, tell them we’ll be there very soon,” referring to his cancelling those shows due to a hand injury. He had a rose-coloured bandage on his right hand. He continued, “Meanwhile, I’d like to dedicate this song to Marrisa Shen.” She was a teenager who was murdered in Vancouver. The song was “Life is a Pigsty.” As it ended, he leaned into his mic and asked, “Does anyone mind if I … smoke?” Various people answered no. Thick, dark smoke started billowing out, filling the venue, reminiscent of dense, London fog, as the band moved into “Jack the Ripper.”

One of the gems from 2017’s Low in High School is “Spent the Day in Bed” which he sang with the substituted lyrics, “Where all my dreams, are practically legal. In sheets for which I paid; I never get laid.”  To close the show, he treated the crowd to a scorching version of “What She Said” with the lights on full throttle and the outlines of highway signs flashing.

As he came back for an encore, a Hispanic man glued to the front of the stage, waved Morrissey’s List of the Lost book for him to sign. He has a huge Hispanic following and recognized this fan. He bent down and signed the book for him and then moved on to “Last of the Gang to Die.” He had retuned to the stage with just a black shirt which he tore off and threw into the crowd before disappearing, leaving them wanting more.

Morrissey is a tortured and talented artist who has been able to reach a lot of people regardless of his personal beliefs. His lyrics can be witty and are often influenced by the darkness of his depression, while being packaged into layered and catchy melodies created with his songwriting partners. Although he may not feel good about himself and the world, he left the concertgoers feeling good after his performance. Hopefully, he felt the energy … enough to leave him sleeping soundly in sheets for which he paid with their love.