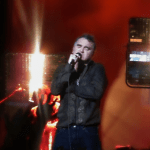 I’m sure we’ve all been gripped (ahem) by the recent “are they going to / aren’t they going to ” reform brou ha ha surrounding The Smiths. Meanwhile, for Morrissey, life goes on. And for Morrissey that ‘life’ has included a Japan tour. Find below a review from one of those shows by our reporter Katie Clare.

Is Morrissey the only ego in the room?
Ã‚Â
We are in NagoyaÃ‚Â for Morrissey`sÃ‚Â penultimate live performance of this Japan tour. It feels a long way in a cheap seat ~ the urban gray’s and power lines flash by at hypnotic speed, from the capital, westward, to a panorama much the same. Read to fill the time, read to calm the mind: Let the train race, let the train exalt.Ã‚Â
Ã‚Â
The show, as it has been throughout this Japan tour, begins with an education. A decapod of video clips, including Brigitte Bardot, Nico and Sparks ~ I incorrectly identified The New York Dolls at the second Zepp show so perhaps I should be paying more attention in class. At Lipsynka’s final scream the curtain falls, the bells toll out across the walls and Morrissey and his band arrive on stage, and in formation bow. Tonight the Walker brothers, Jesse Tobias and Gustavo Lopez are wearing their ”ËœAssad Is Shit’ t-shirts, while Boz is again all sparkles. The backdrop sports a questioning Oscar Wilde “Who is Morrissey?”Â

”ËœHow Soon is Now’ executed to a loud and enthusiastic audience ~~~~~ In my mind around and around a line from my train book “To love is to recognize yourself in another”Â (Eckhart Tolle). So, is that what we do with Morrissey?Ã‚Â  The physicality of history I have with this singer and his songs, a 27 year memoir, exists on more levels than the pleasures and pain of mere hands. I’m in the here and now, not reminiscing, the words he sings, the music that plays and the nuances of Morrissey’s face and body as he performs are my present life’s landscape, as well as my past, after all we are the sum of our parts. Morrissey then is each one of us here, in varying degrees. So are we not all narcissists? After all are those not our heartbreaks, our spite and our revenges we are watching and listening too.
Ã‚Â
”ËœYou Have Killed Me’ With softened frame and arms out straight, wrists exposed as if sharing an inflicted physical damage “You have killed me, you have killed me”Â all responsibility lies with the rejecter – the rejected abused, damaged and accusing. Rich poetic poignancy “I forgive you, always I do forgive you.”Â.

Slinking up and pouncing upon us with its perfection of drum beats and troubadour guitars, ”ËœBlack Cloud’, snaps and cracks with the paradox of tortured stoicism at unreciprocated lust/love. Heart thumping it’s highs feeling achingly passionate sliding down in an Ennio Morricone-esq guitar a momentary inhale before taking off again impassioned and debauched “I can choke myself to please you and I can sink much lower than usual”Â but rejected, knowing no decadent promises will change the outcome predestined “But there’s nothing I can do to make you mine”Â the jolt at the conclusion ending forever any hope.
Ã‚Â
We have been going at a fast pace, while Morrissey has made contact with many of the audience, there has been no chat so far tonight although some lyrical alterations have been in evidence. Next to pass too soon ”ËœAlma Matters’ and ”ËœOne Day Goodbye’, the crowd very excited. “One day will be farewell. How very true”Â he speaks.

The lights darken, high voltage white explosions of light smash our pupils, ”ËœWhen Last I Spoke to Carol’ storming in with it’s huge mariachi slams, telling a tale of last ditch pleas for love and acceptance that even the one who understands can’t grant. Like the lyrical alterations the set list likewise gets the change treatment tonight aptly ”ËœI’m Throwing Paris Around”Â which was indeed felt a little thrown out.
Ã‚Â
“Can I tell you something? Would you be afraid to listen? ” he asks “Do you realize people are indeed the same everywhere”Â An enjoyable ”ËœPeople Are the Same Everywhere’ and ”ËœI Will See You in Far Off Places’ follow. “It’s just so hard to say all the things you want too”Â he states before a galvanizing ”ËœTo Give Is the Reason I Live’
Ã‚Â
As the lights glare blood red ”ËœMeat is Murder’ and its accompanying video of animal slaughter play out to a quiescent audience. I’m unable to not recoil and shield myself from the images, a life time vegetarian, they are real inflictions of pain to me and the words hit as hard as they ever did “NO, NO, NO IT’S MURDER”Â sings Morrissey in hushed tones. The guy next to me “shoushin”Â: A simple translation ”â€œ “heartbreak”Â. However from experience I feel his message will be forgotten before the final F chord fades and is unlikely to garner much lasting or legitimate support in this country or in this world.

As the familiar intro to ”ËœStill Ill’ gears up “I can smile about it now”Â says Morrissey with the just the slightest air of nonchalance, the audience goes crazy. The ensuing enthusiastic aftermath precedes a double encore “In NYC in 1930’s there was a young man called Irving Berlin who wrote a song that went nothing like this”Â introduces Morrissey and a fun and joyful ”ËœOscar Was the First of the Gang to Die’ is enjoyed by theÃ‚Â  buoyant Nagoya crowd. “Irving Berlin”Â continues Morrissey “so repulsed by that horrible song, wrote this”Â and the lazy melody of ”ËœEveryday Is Like Sunday’ is drowned out by the vocal appreciation.
Ã‚Â
And as the pollution drenched air has stolen our stars, time has done the same to the night and the music has ended we are left cheering the neon lights and our own screamsÃ‚Â – just more evidence of our collective egos I guess.

All words: Katie Clare. More by Katie can be found here.