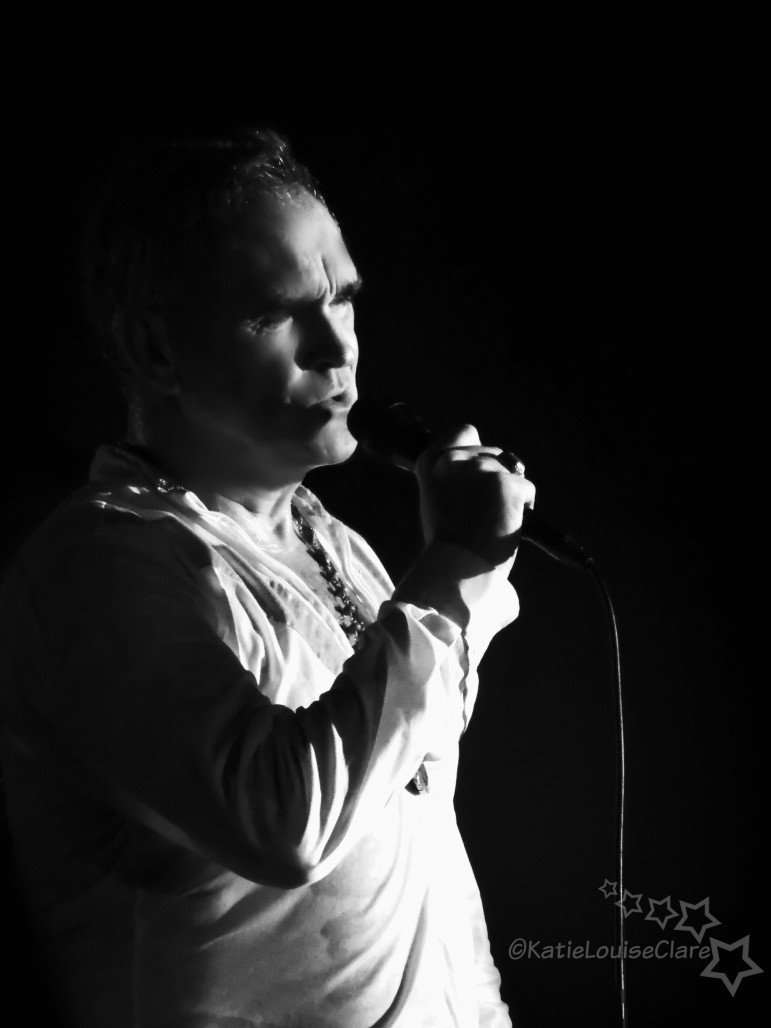 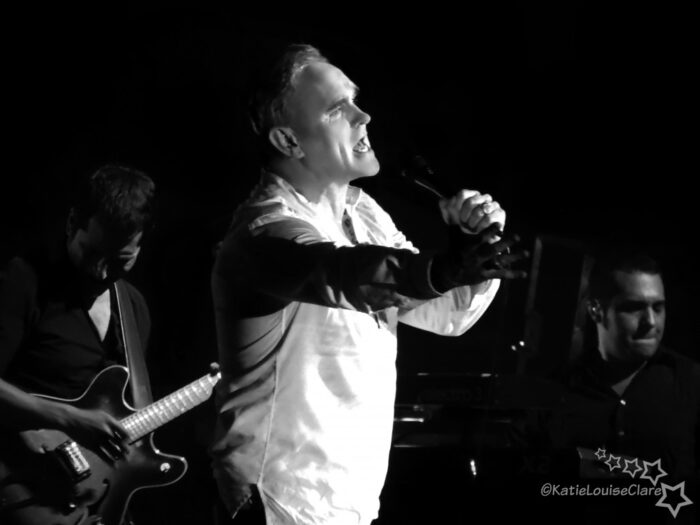 The Ice Arena, Kingston upon Hull

Katie Clare went to Hull for the second of four UK dates as the second leg of Morrissey’s World Peace Is None Of Your Business tour.

Three years have passed since the untouchable perfection and intimacy of following Morrissey‘s Japan tour; so special were those shows – it’s almost like a dream now. It’s a Friday evening and the sky is grey and blue in equal measures over the single story Hull Arena, the air chilled. Nondescript as it could be if you put aside the queue which snakes along the street. The audience more animated than the one outside Leeds Arena earlier this year: and as the doors open bodies sprint to the front the venue staff get their first glimpse of just wants in store for them tonight the space filled to capacity and then some. No support tonight. Many veterans of Morrissey gigs smile with happy relief, fathers are chastised by young daughters for not pulling off quite the right back drop including selfie and people gingerly totter back and forth balancing plastic cups of gassy lager. Springing into life the video montage is an enjoyable mix of music, conversation and performance and as Lipsynka screech begins so does the mass of cheers as the crowd creates an ear ringing cacophony to welcome Morrissey and his band to the stage.

In white shirt adorned with a liberal sprinkle of sparkle and chains Morrissey strides to front and centre – looking stronger and healthier than in March – and off we go swept up into the orchestral melodies of Suedehead. Morrissey’s pitch is so crazily romantic it twists at your heart, creates storms in your stomach and kicks the rigidity right out of your legs. The wistful rhythm fades, returning firmer as Alma Matter slides in. Morrissey cradles himself his own arms, the body language at odds with the strident declarations: “So the life I have made May seem wrong to you But, I’ve never been surer It’s my life to ruin My own way.

Speedway becomes a shared performance with Gustavo Manzur who takes over the vocals half way through while Morrissey stands protectively behind his keyboards using a tambourine to support the rhythm: “Siempre he sido fiel a ti” sings Manzur with a sweetly lilting tenor – it’s an unexpected and delightful diversion. After a four year rest Ganglord has returned to the set in the past 18 months – watching the montage of human to human violence that accompanies the music momentarily fades into the background – replaced by the unbroadcast pleadings, screams and dying cries – the song pounding away returns it to consciousness.Morrissey enunciates each word like he’s chiseling each one into granite as the brutality plays out behind him.

No one can say Morrissey isn’t an open book – unless they’ve not been listening all these years. The songs are the man’s whole being laid out for all to view. It is not just his passions and fears that he so honesty shares. He delves into these modern times and themes of civil rights, sexual identity, philosophy, social economics, politics of all variations. Morrissey tells all at time’s with sudden impact, others defensive, sometimes meandering here and there never fully finishing the question let alone providing a complete answer. Mostly he deals with our deepest emotional desires, never using quite the same light, shadow or gesture, full of ego, anxiety, hope, need and the desire to share it all.

A quartet from World Peace Is None Of Your Business kicks off with Staircase At The University: everyone gleefully singing along this child’s demise; nothing like a smile to help deal with reality. The simulation of dreams hits peak with Kiss Me A Lot, to land solidly back to earth with World Peace Is None Of Your Business as we’re beautifully cooed with cynical truths: “You poor little fool”. Between song chat is limited. There use to be more in the past I’m sure? But tonight we have just a few words here and there: “Jeremy Corbyn”, Morrissey says, drawing a heer almost at a level of that which greeted him on stage. Jeremy Corbyn. That’s all. That’s the statement. When Jeremy Corbyn refused to sing God Save The Queen I thought thank god. Well hell to God Save the Queen right. Hell yer. 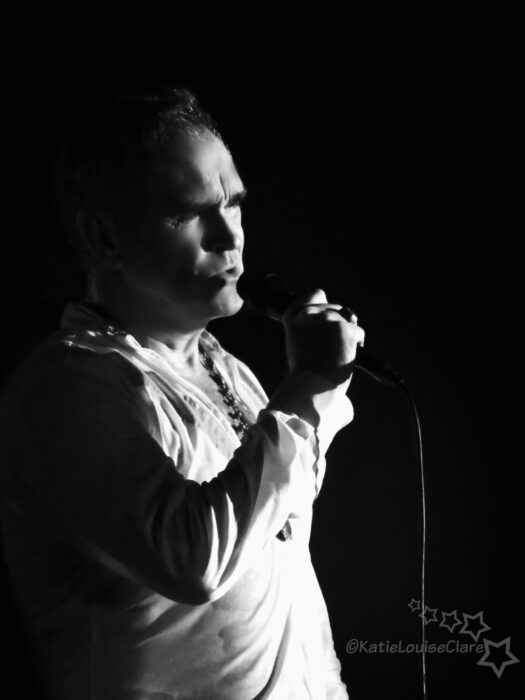 The set is not always easy. Meat is Murder is still after 30 years a tough track to deal with. It terrorises your emotions, the buzz cut of guitar sends terror filled shivers through your spine and that video, oh that video. It’s just the most uncomfortable of truths. You can physically feel those around you either bristle or shrink with their guilt or self belief that they shouldn’t have any. I’m Not A Man is another track that polarises. It’s a tally of negative male characters, deliberately forceful, highlighting the complexity of gender identity and its impact on how we behave and perceive what someone ‘should’ be.

Great songs, wonderful executed that pack powerful messages. Not really as self righteous as many say, he’s simply holding up a mirror up to what is done. If anything he’s optimistic – opening his heart up to the possibility of how much better the world could be. Regardless of intent, this is the reason in part that Morrissey is such a remarkable artist, one who continues to explore, produce and create. if we did’t have Morrissey to open up debate, voice an opinion or point out our darkest acts, thoughts and yearnings we’d be so much the poorer for the void left behind.

Everyday Is Like Sunday has everyone forgetting themselves as they belt every nuance laden syllable. Those fueled with a frenzied need to reach heights climb precarious perches stretching arms out to the aluminum sheeting covered roof. Some of the lavish orchestration is lost in the arena, intense melody and heartrending lyricism throttled by all this histrionic enthusiasm but it seems the world over can’t helped looing their collective minds over those Smiths standards and it’s no hardship joining in and losing yourself in the theatricals.

Leaving and returning to the stage in the very shiniest of red shirts for a single encore What She Said Morrissey storms through the firecracker track: “It took a tattooed boy from Birkenhead to really really open her eyes.” Unbuttoning his shirt slowly one ….. two ….. three all the while singing the unrequited desire of something to cling to four … five …. and off comes the shirt: one last gaze and turning on his heels – he’s gone. Gone too soon. The night too short. There really should have been more. As the audience pour out the open doors their breath floats in the cold air creating small clouds that hover above their heads for the very briefest of moments then vanish without trace into the dark.

The official Morrissey Facebook page is a good place to pick up news as is True To You and Mporium is Morrissey’s official store for all current Morrissey goods and a great place to get further information on the protection of animals is via PETA: People for the Ethical Treatment of Animals.

All words and photos by Katie Clare. More writing by Katie on Louder Than War can be found at her author’s archive. She can also be found on Twitter as @tokyo_katie.