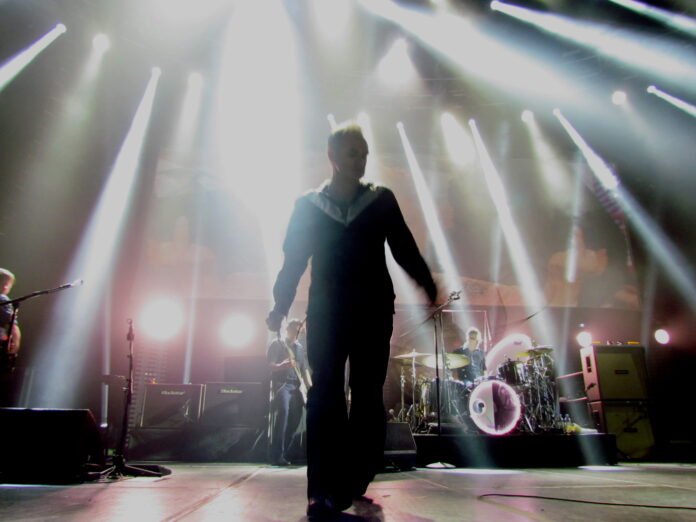 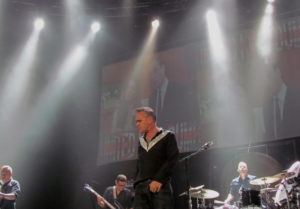 British icon Morrissey took the stage last night at The SSE Hydro, Scotland’s largest public event arena, and mesmerized his fans with a wonderful mix of old and new songs. Based on his keen perspective on culture, gender, modern-day society, and politics, his concerts is a form of conceptual art from beginning to end. With all meat and fish products removed from the venue’s menu and a t-shirt depicting a naked Morrissey with his hand over the Queen’s mouth among the merchandise, it was clear that Morrissey was in the house.

He started last night’s show with a distinction choice. Once we got in the venue, our ears were greeted by Russian composer Nikolai Karlovich Medtner’s ‘Andantino con moto’ played by Evgeny Svetlanov. It was a marvellously unusual start.

The music mix they played as an intro also included ‘The Gift’ from The Velvet Underground, ‘It Happens Every Time’ by Tim Buckley, ‘Lazy Sunday’ by Small Faces, ‘Morning Star Ship’ by Jobriath, ‘Your Woman’ by Tyler James, ‘The Hop’ by Theatre of Hate, ‘Dark Sunglasses’ by Chrissie Hynde, ‘Shamrock’ by Nathan Abshire, ‘It’s Indian Tobacco My Friend’ by Cornershop and finally he made thousands of people heard Maya Angelou reading her poem “No, no, no, no”.

What an epic choice it was to start a concert with the strength of poetry!

Morrissey has invited very talented musicians to open his shows over the years and last night in Glasgow, the legendary Cree singer-songwriter/activist/artist Buffy Sainte-Marie took the stage. Merging her Indian roots with a modern, pounding sound, The Canadian native put a very strong half-hour show.

Then as we were listening to Klaus Nomi’s spine-chilling ‘Wayward Sisters’, the curtain came down dramatically and there were Morrissey and his band in the bright lights! His presence on stage is so charismatic that the moment you see him, you know that you are in the company of a true legend. The Smiths’ ‘The Queen Is Dead’ was played as the opener and the backdrop showing the Queen giving the middle finger and a picture of Kate Middleton and Prince William captioned ‘United Kingdumb’ simply made the audience descend into screams of euphoria.

Soon after, we got the tremendous bliss of ‘Suedehead’, followed by ‘Staircase at the University’ and the title track from his latest solo album ‘World Peace Is None of Your Business’. He played 20 songs total but the experience was still too short.

The highlights of the night were ‘One of Our Own’, ‘Istanbul’, ‘Scandinavia’, ‘Everyday Is Like Sunday’, ‘The Bullfighter Dies’, ‘Meat Is Murder’ and the closing track ‘Speedway’. Morrissey’s early songs and The Smiths songs received the greatest reception but gems like ‘Istanbul’, ‘I’m Not a Man’ and ‘Neal Cassady Drops Dead’ amazed the crowd with his lyrical prowess.

Compared to his other shows, Moz seemed not to be in a talkative mood last night but he shared his opinion on the Scottish independence with the audience and it met with rapturous applause. ‘I know many of you will disagree with me, well, you might, but I was very disappointed by the outcome of the referendum. You missed your perfect chance. Maybe next time,” he said. It was not so surprising, because he had declared his support for Scottish independence ahead of the referendum. But if he hadn’t expressed his thoughts about this controversial political subject on stage in Glasgow, I’d have been disappointed. Because he is a living example of a true artist who never shies away from stating his opinions and knows no boundaries. He’s an outsider, in a literal sense, who bravely disturbs the comfortable by always speaking his mind and he has never stopped proving that for more than three decades.

Last night, Morrissey rarely spoke between the songs but announced, “I will always be in your debt,” while gracefully taking letters from fans. Until ‘Meat Is Murder’, apart from bright lights and some images, there was barely any stage decoration. But The Smiths’ well-known animal rights protest song was supported with shockingly graphic footage of factory farm cruelty to animals. During the song the band was really got wild, pounding on huge drums that sounded so angry. This is the song that changed my life and I still think it is the most intense song ever recorded. Not only it is disturbing, but it is also awakening.

To me, ‘Meat Is Murder’ is always the best part of a Morrissey show, but some people say “hearing it in a live setting destroys the energy in the room and that’s why it is the ‘love it or leave it’ portion.” But obviously, Morrissey has never been an artist who wants to be liked by everyone. He just sings his heart out.

As usual, his shirt toss caused chaos among fans who tried to get a piece of shirt. He ripped open his shirt and presented his body to the audience. When I interviewed last year, he said, “ It’s not meant to be an orgiastic moment – I’m not asking anyone to find me impressively seductive, but rather, to get out of this human need to always be enclosed … enclosed within clothes, within cars, within houses … humans are obsessed with being ‘inside’ or covered, and they don’t feel comfortable with the lyric natüre of freedom of any kind.”

When he returned to the stage for an encore, he told the audience, “Whether you take the high road or the low road, I love you,” and ended the concert with ‘Speedway’. It was a perfect evening of music of poetry.

Like it or not, he has always been true to his fans… ‘in his own strange ways’, as he put it best in ‘Speedway’.