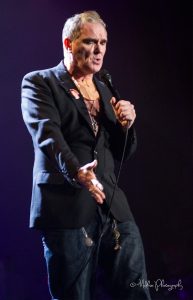 No stranger to controversy Morissey has been stirring murky waters yet again. Whilst his fans either ignore him or hope he is being ironic or he is taking a longer point of view than just the headlines, his latest controversy saw him claiming that the UKIP leadership election was rigged to keep the anti-Islam campaigner out, a candidate who even Nigel Farage said was too extreme.

Of course he could have meant that the leadership election was rigged and he was not supporting any candidate or policy or he could be winding up the liberals or causing trouble or he could have supported the candidate, or supporting Ann Marie Waters – a former labour politician from the left, Lesbian and feminist who is concerned by the rise of Islam in Europe and using UKIP as her platform now or he could be giving the old hornets best a shake…you decide!