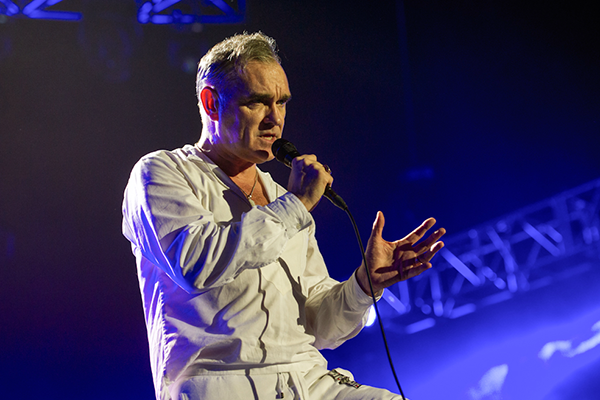 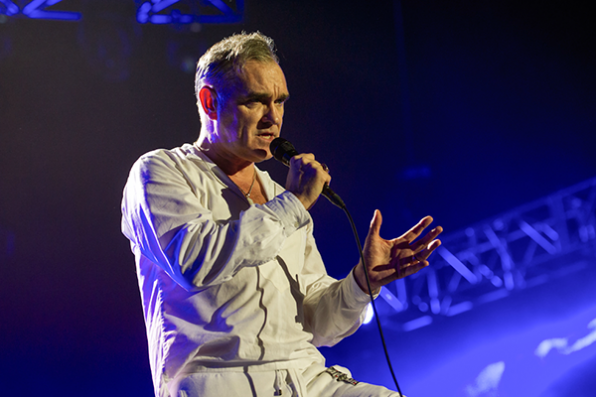 Louder Than War’s Nick Holmes was in the audience on Saturday as Morrissey played his first and only British gig of 2014 at The O2 in London.

Some eyebrows were raised when Morrissey announced a one-off UK date at London’s cavernous O2 Arena, the biggest indoor show of his career on home soil, but anybody who has followed The Smiths’ former frontman knows he does things very deliberately.

It proved so again tonight.

He arrived in the capital after, by his standards, a relatively uneventful tour of Europe. A show in Poland was halted after a member of the audience shouted offensive remarks and he was hauled off for his own safety by security when fans invaded the stage in Essen. There have not been the cancellations that he has been notorious for in the past, but an interview with a Spanish newspaper revealed the reason behind many of his absences. He had been treated for cancer as many as four times. The first UK gig since this revelation was always going to emotional. It certainly was.

Morrissey has invited a colourful mix of characters to open his shows over the years and former music teacher Anna Calvi proved an invigorating choice. The Twickenham native was playing her own biggest ever indoor British show though she showed no sign of nerves before the headliner’s occasionally fierce audience. A Mercury Music Prize nominee, she has assembled an impressive band to play songs that by turn are sensual, sassy and at times confrontational. From atmospheric wistfulness of “Cry” to the slow build of interestingly-titled “I’ll Be Your Man” the songs sounded much beefier than on record. For all her subtlety she showed she’s not afraid to be loud! Calvi’s voice is rich and soulful while her guitar sound indicated influences as wide as Hank Marvin’s Western twang to heavy Prog that Hawkwind would be proud of. The sexy swing of “Desire” was a particular highlight, with the lyrics about “the devil in me” and the theme of living for the moment. She is a fantastic talent and no doubt she won many new fans in Greenwich tonight.

The customary Morrissey video jukebox preview is still very much part of the show but there were some new additions. Among The Ramones, odd interview clips with an old lady talking of her eccentric wardrobe and his beloved New York Dolls, Morrissey’s own scathing tribute to Margaret Thatcher raised huge cheers from the audience. As “Ding! Dong! The Witch Is Dead!” from “The Wizard of Oz” played, footage showed wild street celebrations and graffiti marking the demise of the former Prime Minister. The final image simply said “Margaret Thatcher is dead. LOL!” Then it was time…

A rumble like a spaceship landing heralded the arrival of The Wizard of Moz and his band. They formed a huddle like a sports team about to kick off a match and then it was straight out the blocks. Morrissey, decked out in white from head to toe, cried “I am privileged beyond my wildest dreams!” and as a doctored image of Elizabeth R appeared on the backdrop he led into a savage version of “The Queen Is Dead”. There was an appearance from Wills and Kate too, showing Moz’s disdain covers all generations of Royals. The audience went equally crazy for “Suedehead”, with a backdrop of young people hanging out on the street back in the day by contrast to the previously privileged persons projected. So far there was a palpable celebratory vibe.

Morrissey paused to declare, “You are human kindness!” before “Staircase At The University and title track of his most recent album “World Peace Is None of Your Business”. Still stung by his alleged treatment by a “very clever” ex-label over the record’s release and then withdrawal, he told a chorus of boos “Let them know!” Members of the band were also wearing T-shirts emblazoned with “Fuck Harvest” (Records).

After a brisk and brash start the mood then darkened somewhat. The majority of the songs were drawn from “World Peace…” and it was clear this was what Morrissey wanted to play, not a crowd-pleasing greatest hits set. That said the crowd knew the new material well and sang along with as much vigour as the couple of older songs that included “I’m Throwing My Arms Around Paris” and “Trouble Loves Me”.

Morrissey claimed he once wanted to live in Wapping, just down the road from the venue, having seen a film set there when he was a child. “You still are a child!” called one punter. “Yes, I know,” chortled Moz, “but when I was a REAL child. I don’t want to live there anymore!” From “The Bullfighter Dies” onward the d-word loomed large with “Neal Cassidy Drops Dead” and “Smiler With Knife” as well as the sad tale of loss in “Istanbul”. Having ensured the venue would serve no flesh to hungry punters, Moz once again made his views on animal welfare starkly clear with truly grim footage of slaughterhouses and battery farms on the screen as the stage lights turned a deep shade of red. The lament of “Meat Is Murder” included special ire at KFC and then he stood in the corner beside the drum kit with his hands on his head, back to the audience.

After spiky runs through “Scandinavia” and “Kick The Bride Down The Aisle” the first humdinger moment occurred during “I Am Not A Man” Morrissey emphasized very clearly the words “cancer of the prostate”. The defiant lyrics gave way to loud recorded screams as Moz sank to the floor. The apparent message here was not lost on the audience. There were gasps and and tissues passed round as the song ended. Powerful as it is on record, it was a near-knockout emotional punch delivered live.

Morrissey thanked Anna Calvi for being “such a fantastic inspiration” before the main set closed with ominously moody “Speedway”. When the lights went out at the mid-song pause, the surprisingly well-mannered crowd made no mad rush toward the stage. The mood had noticeably changed. More tears flowed as Moz sang, “In my own strange way I’ve always been true to you.” As the band left drums were kicked across the stage. It was an odd close and the audience didn’t have long to absorb it.

When they returned, arm in arm, Morrissey now sporting a dark blue shirt made a brief statement culminating with the Dido’s Lament quote, “Remember me, but forget my fate.” The crowd were noticeably moved as he sang The Smiths’ classic “Asleep”, whispering “Bye…bye…bye…” very clearly at the end. Though this is on the record, live it was chilling.

Just in case there were any dry eyes left in the house, “Everyday Is Like Sunday” ensured one more mass outpouring of emotion. A choir of 20,000 sang every word with Moz, and by way of thanks he removed his shirt, throwing it to them. He managed to shake a lucky few hands, briefly being pulled a little too keenly, before he said, “I love you. I love you. I love you!” and retreated as the band closed up.

Morrissey has always been an enigma. Contrary, combative, spiteful and sarcastic. He also has had a very strong sense of gallows humour, ever since he was a young man. Despite his often outlandish statements and ambiguous utterances in recent years he has become more candid, as his autobiography and some interviews have demonstrated. There is also a noticeable bluntness to his newer lyrics. Why beat around the bush?

Around the time of his 50th birthday he talked of retirement but that is a much less comfortable option given the collapse of the record industry as he once knew it, as well as his tribulations with Harvest. The band, led by the ever-reliable Boz Boorer, are in fantastic form. Moz himself is looking greyer of hair with a few more lines on the visage, but considering the news about his health problems he seems in great fettle and his voice was noticeably stronger than it has been in a long time.

The response on social media has picked up on the sombre mood underlying last night’s show. From relatively new fans to old guard many have said they were in tears at the show and on the way home. It was maybe best summed by two lads walking to the underground station. “Mate, I’m stunned. I don’t know what to say…” with his friend responding, “Yeah, I’m speechless.”

As said at the start of this piece, for all his dramatics, Morrissey does things very deliberately. That may be lost on some fair-weather visitors to his world, but not those who have observed him closely and to whom he means so much. As the man himself once sang, “One day goodbye will be farewell.” But not yet, please. Not yet.