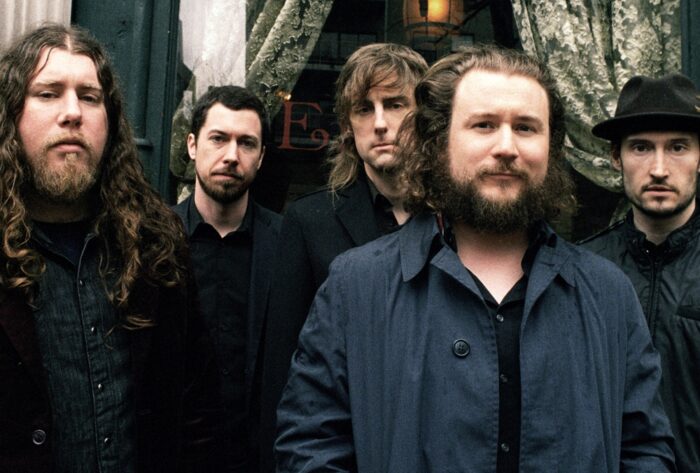 We see Kentucky rockers deliver an onslaught of a performance in Manchester.

My Morning Jacket’s appearance at The Ritz was part of an all too brief visit to the UK as they continue to tour new album The Waterfall. The tour is also a continuation of the Spontaneous Curation Series, where, like children leaving their teeth under the pillow and hoping the tooth fairy comes, fans submit requests electronically and hope they will receive a ‘musical sixpence’.

It’s doubtful that any fairy has ever made a more magical entry than that of Jim James, striding across the stage as he delivered the familiar shrieking intro to Victory Dance, the perfect set-opener as it simmers and builds to a deafening conclusion. From here we set off into new album territory with Compound Fracture and In Its Infancy (The Waterfall). These two tracks alone amply demonstrate why The Waterfall is one of the outstanding albums of 2015 with the ‘60’s-style groove of Compound Fracture a sublime contrast to the subtle intricacies of In Its Infancy.

Jim James is a compelling frontman, otherworldly yet in complete control of the complexities of the songs performed. A shaman leading his devotees through a collective experience, he is both mesmerising and cool. No words are spoken between songs, but none are needed as the music says everything, very loud and crystal clear.

The songs from Waterfall, Believe (Nobody Knows), Like a River, Tropics (Erase Traces) and Spring (Among the Living) add further weight to the positive reviews of the album, but their live performance also reveals serious power behind them. In fact, throughout the show all the tracks are delivered with a power-packed, heavy intensity that makes for compulsive viewing.  The guitar interplay between James and Carl Broenel is superb, alternating lead and rhythm runs seamlessly and the range of guitars are used by James to great effect as the wall of sound fills the room. Of equal importance is the ‘engine room’ of bassist Tom Blankenship and drummer Patrick Hallahan who ensure the perfect platform for the six-string pyrotechnics being fired out. Bo Koster’s swirling synths are a constant backdrop and add an essential ethereal touch to the performance. That and the continual low pulsing ensures a perfect balance between full-on guitar attack and the mysticism of the lyrics.

Alongside The Waterfall, Z is the album that provides the bulk of the tracks with Dondante merging into Lay Low being the centrepiece of the evening. An extended jam that stretches for almost twenty minutes and sees Broenel on the sax for part of it could lead to accusations of over-indulgence but the crowd tonight, who for the most part are transfixed by the spectacle unfolding, lap it up. That really is the strength of a spontaneous set-list and such a strong back catalogue – it doesn’t matter what is played and there’s not really tracks that have to be played, just a range of surprises to enjoy. So we enjoy the religious musings of Gideon, early classic The Dark from debut album Tennessee Fire and my wish comes true with the magnificent Circuital. Encores see the lady wife get two wishes fulfilled in Wordless Chorus and Off The Record alongside Holdin on to Black Metal before an absolute onslaught of One Big Holiday concludes the evening.

The Waterfall will certainly feature on many ‘albums of the year’ lists and there is promise of a follow-up release next year which is something to anticipate. However, this was surely one of the ‘gigs of the year’ for all those present and we can only hope that a swift return to the UK follows next year.