Ian Johnston brings us the latest of his regular roundups of re-issues from Ace Records, who are still one of the best reissue labels in the world. 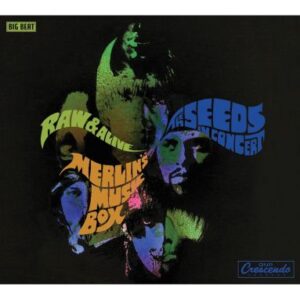 Once again expertly compiled, researched and extensively noted by Alec Palao, this outstanding 2-disc package outlines the convoluted saga of the creation of this “live” intemperate punky masterwork. By 1968, the momentum of The Seeds’ career was beginning to flounder for a variety of reasons: drug addled vocalist Sky Saxon’s increasingly erratic behaviour, the vagaries of fashion changing sharply against the group, the commercial failure their ‘difficult’ full-blown psychedelic third album Future and their fourth A Full Spoon of Seedy Blues, coupled with the pronouncements of their former manager Lord Tim Hudson, all took their toll.

The Seeds, and their label boss Gene Norman, felt they had never been able to capture the dynamic, invigorating quality of their live performances on tape. A live studio session performed in front of an invited audience on 20th February 1968 was arranged but failed to ignite – the second disc of this set contains that performance. The next attempt in April 1968, without an audience, sired Raw & Live.

Available for the first time without the spurious overdubbed crowd applause, and in its original incarnation, Raw & Alive is a blast from start to finish containing full on versions of Seeds standards, such as ‘Satisfy You’, ‘Can’t Seem To Make You Mine’ and the primal ‘Pushin’ Too Hard’. 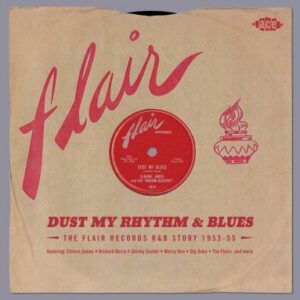 A double CD of unparalleled magnificence, compiled and noted by Tony Rounce, this thrilling compilation charts the brief, but glorious, existence of the Modern Records’ subsidiary. Flair. Featuring much of the best mid-1950s R&B, blues and doo-wop created on the West Coast of America, remarkably more than half of the 50 tracks included have never been issued on CD.

Unbelievably, as related by Rounce in the excellent 23-page booklet, Modern Records founder/A&R head Jules Bihari originally envisioned Flair as a western/hillbilly music label: one of the label releases was a morbid tribute to the recently deceased Hank Williams, ‘Guest Star In Heaven’, by Earney Vandagriff. Yet, Jules Bihari and his brothers soon focused upon the music they knew best for Flair – blues and R&B.

Two seminal figures would come to dominate the label’s output – blues master Elmore James and unsung hero of black rockin’ rhythm & blues, Richard ‘Louie Louie’ Berry, who wrote and performed with many of the musicians who recorded for Flair. Obviously, James’ and Berry’s work are featured heavily – the mambo flavoured ‘Can’t Stop Lovin’’ by James and His Broombusters and Berry’s immortal ‘Oh! Oh! Get Out Of The Car’ to name but two classics included here.

However, a score of other performers who also recorded masterworks for Flair and are integrated throughout: James Reed’s violent, jumping ‘You Better Hold Me’, Johnny Ace’s eerie ‘Midnight Hours Journey’, Ike Turner’s exotic instrumental ‘Cuban Get Away’ and Johnny Fuller’s mournful blues, ‘Hard Times’.

Dust My Rhythm & Blues is undoubtedly an essential disc. 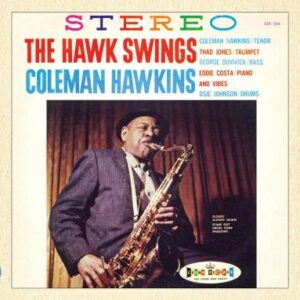 The Hawk Swings is a punchy, blues flavoured, early 1960s hard bop session by one of the most influential tenor jazz saxophonists in the history of recorded music, Coleman ‘The Hawk’ Hawkins.
Comprised of all Hawkins compositions, The Hawk Swings is a rollicking display of the artistry and dexterity that kept Coleman a vital contemporary figure in modern jazz from his days in the Fletcher Henderson Big Band in the late 20s until his death in 1969. Never perplexed by the seismic shifts that occurred in jazz during his lifetime, The Hawk just embraced new styles and players into his utterly distinctive sound. He would often team up with another giant of his generation Ben Webster, but would also be featured on pioneering recordings by pianist Thelonious Monk or drummer Max Roach.
Though there is nothing particularly groundbreaking or radical about these admittedly fine Hawkins’ numbers on this independently recorded session sold to the LA Modern label, The Hawk Swings just oozes sophistication and joy derived from a lifetime of experience playing the music he understood, like few others, as he entered his 60th year. The racy ‘Cloudy’, the free and easy ‘Almost Dawn’ and the swinging ‘Stake Out’, which really should have been used on a late period film noir soundtrack, are simply a blast. 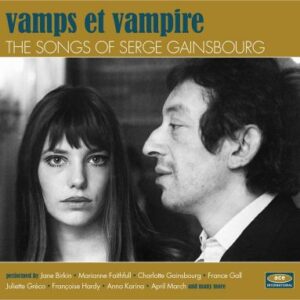 Since Serge Gainsbourg’s death at the age of 62 in 1991, the international reputation of the iconic French singer, songwriter, actor, director, painter, gifted tunesmith and brilliant lyricist (combining French colloquialisms, sexual frankness, poetry and literary sophistication) has only increased with each passing year.

Though his only big hit beyond the borders of France was the infamous and erotically charged 1969 duet with muse Jane Birkin, ‘Je T’aime… Moi Non Plus’ (its backing of breathy coital moans over mournful, baroque organ, strings and a slow R&B groove ensured profitable censure from the Vatican), the decadent provocateur Gainsbourg’s vast musical legacy, covering a myriad of genres from French chanson, through Jazz, mambo, Latin, rock, loungecore, pop, disco and reggae, has captivated an eclectic variety of musicians.

Here, Ace fittingly honours Gainsbourg with an overdue addition to their songwriter CD series (loving compiled by Mick Patrick, with notes by Alan Clayson, author of Serge Gainsbourg: A View From The Exterior), featuring an appropriate stellar all-female cast.

The numerous highlights include Juliette Greco’s rendition of ‘La Javanaise’ and ‘Strip-Tease’, Francoise Hardy’s beautiful reading of ‘Comment Te Dire Adieu’, Anna Karina’s perfect interpretation of the existential ‘Sous Le Soleil Exactement’, the lurid lollypop sucking song ‘Les Sucettes’ sung by the uncomprehending innocent France Gail, Brigitte Bardot’s inspired delivery of the Ballardian ‘Harley Davidson’ and ‘Contact’, and Jane Birkin’s evocative reading of her passport details during Gainsbourg’s channelling of Chopin on ‘Jane B’, are among the unforgettable songs that made Gainsbourg a wealthy and scandalous superstar in France.

One can only pray that Ace issue Vamps Et Vampire: The Songs Of Serge Gainsbourg on vinyl, for this to be the perfect introduction to the masterful songwriter’s evident genius. 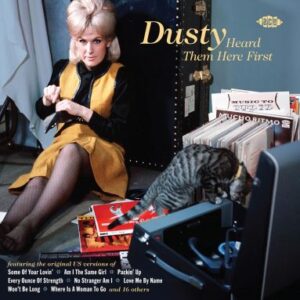 Arguably, the greatest soul singer that the UK has ever produced, Dusty Springfield managed to instil her readings of so much prime 60s American R&B and soul with an utterly distinctive feel, making her name on both sides of the Atlantic in the process. Neither merely slavishly copying her source material, or imbuing it with a totally British perspective (like The Beatles or The Moody Blues), Dusty Springfield naturally and totally credibly made her choice of covers (many drawn from demo tapes, obscure B-sides and album tracks) her own. Tragically, Dusty Springfield’s numerous insecurities blinded her to the fact that she was equal to the best the US could offer.

As good as the material that Dusty Springfield covered was (here compiled and noted by Mick Patrick and Malcolm Baumgart) it inevitably sounded like it had been specially written for her alone. From Motown giants (The Velvettes’ ‘Needle In A Haystack’, Marvin Gaye’s ‘Can I Get A Witness’, The Miracles’ ‘You really Got A Hold On Me’) to Stax (Carla Thomas’ ‘Every Ounce Of My Strength’) and Sue label greats (Baby Washington’s ‘Doodlin’’) and the Queen of Soul Aretha Franklin’s first hit (the 1961 number ‘Won’t Be Long’, featured on Springfield’s second 1965 album Ev’rything’s Coming Up Dusty), the music comprising Dusty Heard Them Here First firmly underlines this.