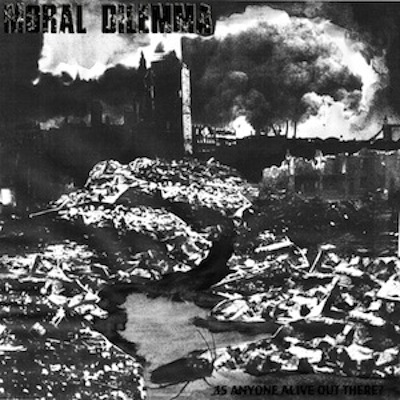 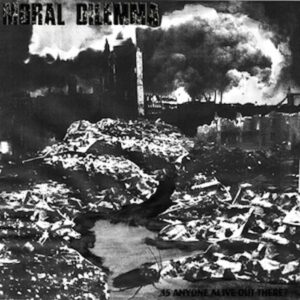 Moral Dilemma are set to release their third and what will be their final album through Pledge Music.

Born of the London squat scene, the band has spent the past eight years touring the U.K. and releasing two albums. From gigs played through makeshift PAs in graffiti-scrawled, piss-smelling buildings to gracing the stages of the Reading and Leeds festivals, Moral Dilemma has undertaken a relentless journey through every gritty corner of the U.K. and Europe. The band even made time to record a session at the world-famous BBC Maida Vale Studios for the Radio 1 Punk Show.

The band’s live shows where renowned for their ferocity and intensity, two qualities that have not so much seeped through as they have flooded Moral Dilemma’s recorded output after having graced the same stages as the likes of The King Blues, Sick Of It All, Swingin’ Utters, Leftöver Crack, Trash Talk, The Subhumans, The Skints, and Random Hand – this is a band that knows how to lay waste to any town…

Both debut album ‘Right to Remain Silent’ ( recorded in 19 hours flat) and the sophomore ‘Agree to Disagree’ (recorded in three days) are abrasive and raw charges of politicized punk rock, hard-hitting and angry, yet poetic at the core. “Is Anyone Alive Out There?” looks set to be a strong progression from their previous efforts, with strong production (recorded in one week) and more diverse sound.

Having been dismissed by some as just another punk band, Moral Dilemma have pushed the boundaries of the scene in which it sits. There’s a lot more depth to this band than studs and traditional clichés.

Whilst tracks like ‘Scare Tactics’, ‘Lost Cause For Alarm’ and ‘Death of The Cool’ represent all out punk rock fury, they are met by songs such as: ‘Too Little Too Late’ with its heavy influence from Chicago blues, ‘Building Gallows’ that features a heavy folk tone with Hammond organ and blazing harmonica solo, whilst ‘Plague Pits’ can only be described as Black Sabbath covering Son House

‘Is Anyone Alive Out There?’ is a dynamic and intense listen, that harks back to a time to when people listened to albums from beginning to end.

In order to get this album released in a format that accommodates the way the album was intended to be heard (on a vinyl LP) the band are crowed sourcing the funds for the pressing of the album, and to cover the small debt that the band owes from recording it.

Songs from the release can currently be heard on their YouTube channel.

This isn’t about a band trying to ‘make it’, this is about a band trying to break even under unfortunate circumstances, and get their music heard the way that it should be heard, as well as the whole need for music to be pressed in a physical package to be held as a relic of value higher than any price tag! Rather than a disposable cd.
This is about a band that worked just as hard as any other band in existence trying to ensure that the music that meant so much to them and their audience is able to live on forever.
There will be no final tour, or last gig. The only thing that is left is this album of a good bands best material.