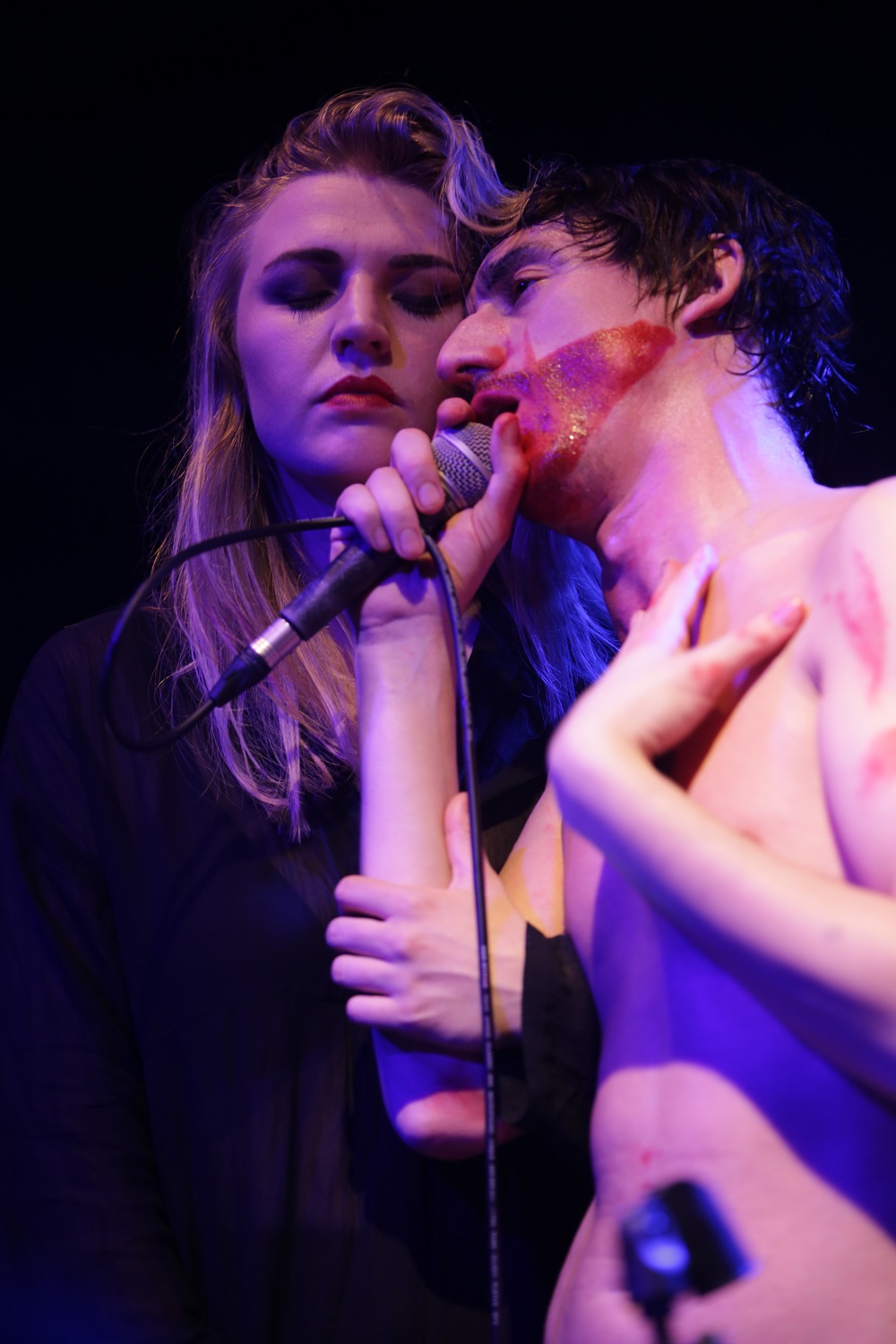 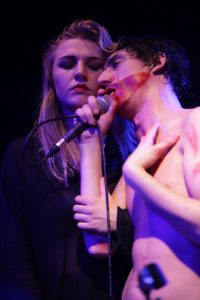 Forever teetering on the edge of collapse but The Moonlandingz pull their performance into sublime beauty at Hebden Bridge Trades Club.

For most artists the backstage rider is a chance to gorge on their favourite snacks but for Johnny Rocket the free grub becomes part of the show. Last time he played here he lurched onstage with one hand stuffed in a tiger loaf, and tonight he has upgraded to half a sliced loaf worn as a soft white bangle. For reasons only he can tell he’s also painted a fake red beard on with god knows what.

Rocket – aka Fat White Family’s Lias Saoudi – sets the tone for evening of trademark Moonlandingz mayhem that sometimes overshadows the fact they a smart and inventive band packed full of left field talent.

This unholy marriage of the Fat Whites and two thirds of Eccentronic Research Council is bolstered by the strong vocals of Slow Club’s Rebecca Taylor, who is moonlighting from her rather more sedate day job to lend considerable vocal talents to the musical version of the Crazy Gang. The moment when Taylor demanded that yet more bottles of red wine be brought to the stage seemed to be just pouring more alcohol onto an already raging fire of excess.

Johnny/Lias notes they want to get the ‘hits’ out of the way ripping his shirt off for an intense version of Black Hanz as the two vocalists really get their rocks off playing against the punchy keyboard riffs of ERC’s Adrian Flanagan and Dean Honer who are the only semi-adults in the band.

It is always a source of amazement that someone as obviously wired as Johnny/Lias can actually stand up, never mind remember the words, let alone staying mainly in time and tune. This is a band that always teeters on the edge of collapse, but there are moments of real stillness, beauty and coming together of shared vision amidst all the lunacy.

There are times when Johnny/Lias and Taylor twist their voices and bodies together in an utterly unself-conscious way, that is incredibly intimate, as if they are so in the moment they just forget there are 200 people watching. They are an addled indie Sonny and Cher which can only be a good thing,

Then it is back to thumping beats in Sweet Saturn Mine prompting Johnny/Lias To take another trip into the audience generating a good natured middle aged moshpit as the singer just floats through the ruck going on about him.

This is an offbeat supergroup, – both in terms of personnel and what they trying to do. Sometimes it works beautifully, and other times fails because it is almost willfully anarchic, but it is never, ever less than challenging or entertaining in a way which few other bands can deliver.

All words and images by Paul Clarke. Read more from Paul on Louder Than War here.