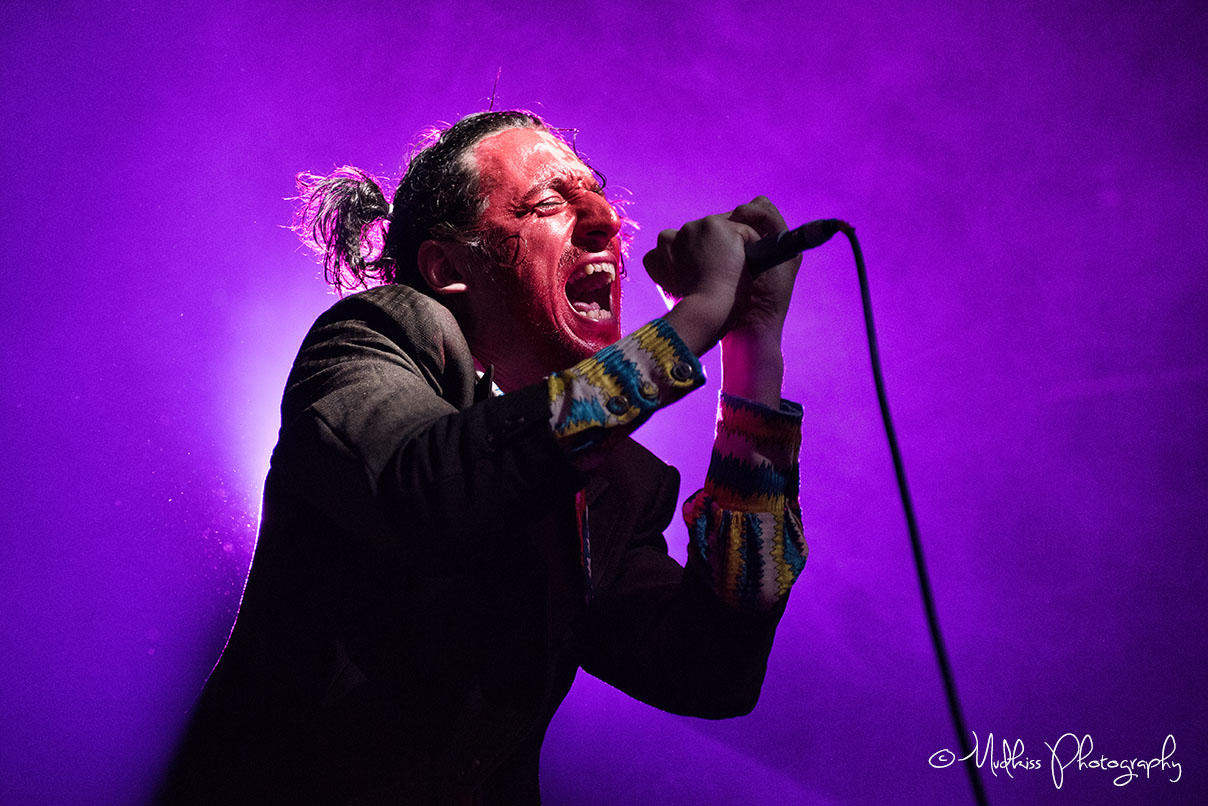 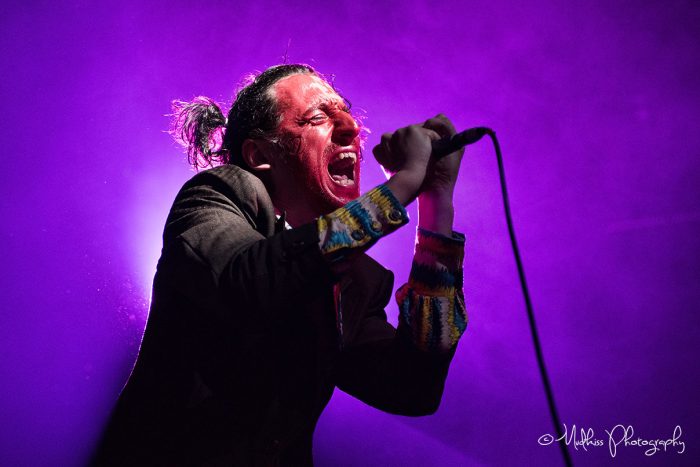 Louder Than War’s Lee Ashworth plunges into an Iggy-esque triple bill heavy on big riffs, swagger and a sense of conviction that feels very 2017. 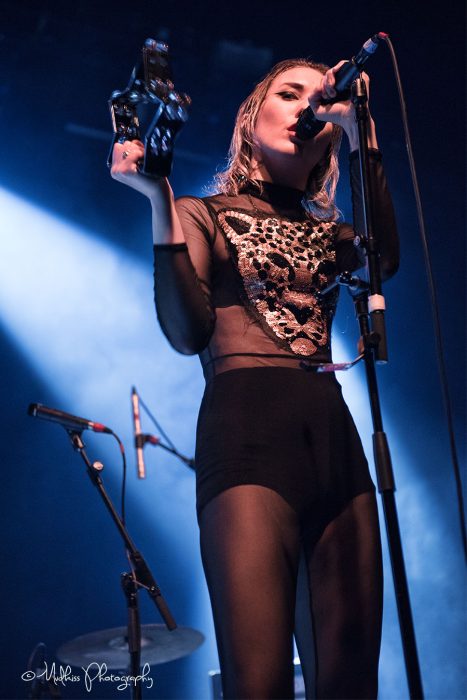 It’s 7:30 as Pins take to the stage.  It seems too early.  Too early for the first band as most people have barely arrived at the venue and too early for our induction into the evening’s proceedings.  Yet fortunately, timing is everything to Pins.  As the female five piece take to the stage, it becomes instantly apparent that time is only one of the laws of the universe clearly under their control.  Now we are on Pins time, sharp and up to the minute.  The house lights are down, the stage is bathed in greens and blues and the famous dance floor is obscured by tonight’s devotees.

It seems so long ago that they backed up an in-form British Sea Power over the road at Gorilla but in the few short years of the interim, they have released their second album and hit heavy rotation on BBC6 Music with the Iggy Pop assisted Aggrophobe and current single, Serve the Rich.

From the instant she arrives on stage, Faith Vern is a commanding and charismatic presence evoking the pantheon of truly memorable performers including Iggy Pop and P.J. Harvey.  These are not comparisons made under the influence of the music alone, they are borne out of a confidence, a showmanship, a desire to communicate and a particular vocal timbre that strikes with clarity and unerring conviction.  Such conviction, tempo, feedback, the rolling percussion and Vern’s snarling postures all conspire to produce a pulse quickening that intensifies throughout the performance.  There is no banter with the crowd.  This kind of engagement needs no further explanation or introduction.

It is a testament to the strength of their material overall that although striking, Girls Like Us and Serve the Rich stand out for the right reasons and not against the rest of their oeuvre.  There is no filler, there is only the rhythm, darker and deeper, darker and deeper.  Tribal.  Primal.  There is a confrontational menace in much of their gestures – lyrically, theatrically and musically.  It all adds up to something undeniably real, something happening right in front of you.  Although steeped in the abrasive alphabet of 70’s New York punk, art school, glam-rock influences, nothing feels derivative.  Instead it feels raw and new,  a freshly skinned knee when you’d forgotten you could bruise. 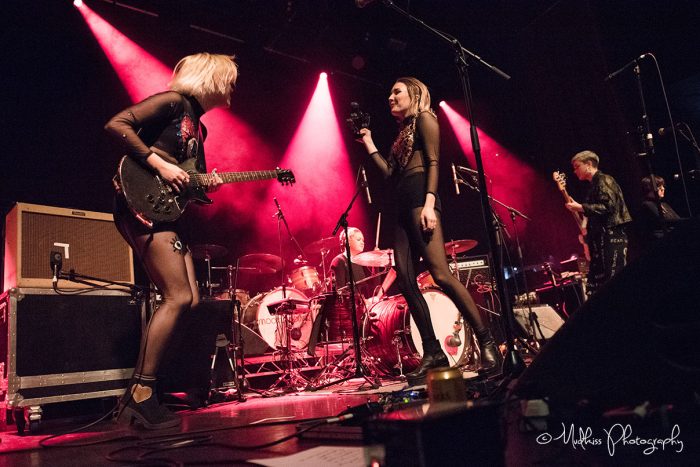 The denouement to Pins’ set features all five band members lining up across the stage and raising their arms, moving them to the side and encouraging the mass participation of the audience in time with the beat.  Still on Pins time, the hands of this clock strike high and wide.  In a world that appears to be increasingly at odds with itself, where sides are taken on every issue, where fake news abounds and every motive, every action is questioned, Pins stand on the edge of the stage and the collective weight of their conviction tips us into the future.

Faith’s yelps punctuate the rhythms and riffs and for long suspenseful periods the singer has her back to the audience, shoulders twitching, her whole silhouette reeking of attitude.  If there is a theme for tonight it’s repetition.  I think of The Fall in their glory years, driven by insistence, brooding with menace yet never approaching the doldrums of aggressive masculinity in which many of their peers floundered.  Instead, over this repetition, there is nuance and intelligence, a depth of feeling and a restlessness of imagination.

There’s a killer on the loose. She’s pacing the hallway of a dive hotel. The one you’re staying in tonight.  She’s wearing boots with dark glam soles and she’s stopped. Outside. Your door.

Arriving too early and departing far too soon, Pins leave a chasm in their wake.  Like many other audience members tonight I have now been indoctrinated into the cult.  I am under the spell.

The Black Lips rip through an hour of psychobilly tinged full on rock.  Although the edgy conviction of Pins is absent, the four-piece are super-charged and focused, their singer leering over his guitar, over the front row and beyond the perimeter of his Southern ‘tache.  I want to hear more of his vocals, I want the tracks to be individuated more but the Lips don’t stop they just wait for the adventurous to climb on board.  Taking to the fray with a sparkly cape hoisted over one shoulder, the guitarist is reminiscent of a haphazard and raucous Captain Beefheart. 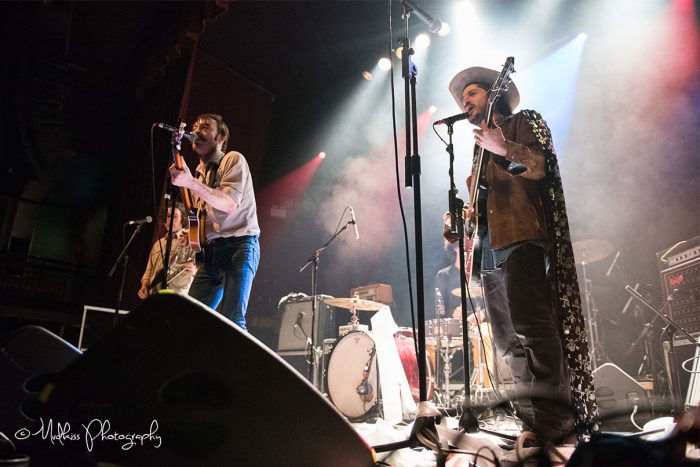 Throughout the Lips’ set toilet rolls ascend and descend on mad trajectories over the stage and into the crowd.  Below me, the throng on the dance floor is gathering ever tighter to this nursery rhyme punk that dips its broad brimmed hat to the Ramones in places, chugging on through the next track and the next and the next. 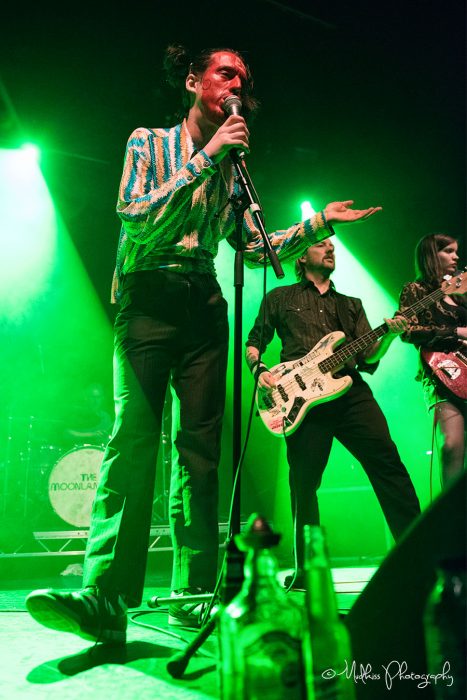 When The Moonlandingz finally touch down it is loud and clear that our evening’s induction will now resume.  This chimerical hydrid of The Fat White Family and the Eccentronic Research Council is a fictional band which appears to give both band members and audience the license to let loose and gradually, throughout the bravura performance, realise that somehow Moonlandingz, in a very twenty first century way, are more real than most things that are supposedly real.  This is the enigma, the twist, the Baudrillardian crease that we all find ourselves wallowing in, mostly pining for an exit or at least some sort of solidity, a reliable sign post – anything!  But it’s a situation in which Moonlandingz revel in the very delight of their dubious existence.  A joke, a theatrical pretence?  A suspended artistic realm which works because all the brakes are off, the regard for reputation, the concerns about commerciality etc are all put to one side and the beast is let loose?

I suspect the Moonlandingz are so convincing, so terrifyingly brilliant in what they do precisely because if they fail they really have nothing to lose.  They’re a fictional band, right?  Incorporate it all into the narrative, their demise will be a footnote mini electro-prog opera on the end of the ERC’s new EP.  Here lies freedom.  But as is apparent on stage at the Ritz, just when you’d think that chaos would ensue, a meticulous musicality, complex yet simple, primitive yet sophisticated arises.  Here, the sense of conviction is teetering over the maniacal. 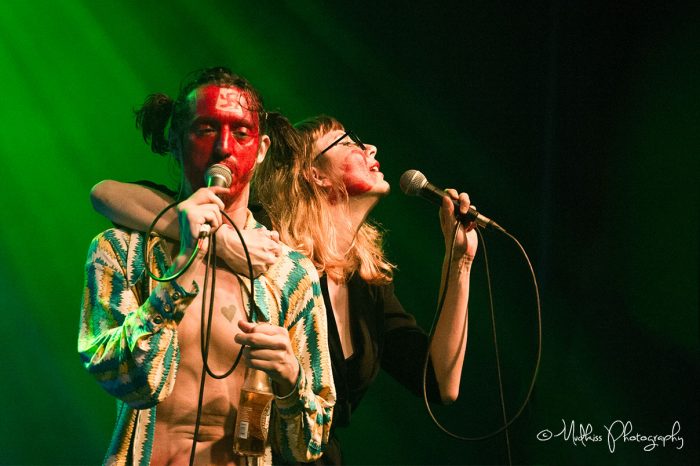 An early number is dedicated to Bury New Road, raising some hints of recognition amongst the Manchester audience.  High praise from members of a band who wrote a testament to the A666.  But whereas the mighty Maxine Peake is absent from on stage proceedings tonight at least, the Moonlandingz really did happen.  I think.  Or maybe they were just staged by members of FWF and the ERC?

Such factual debates have no currency here.  Tonight, the voodoo expressionism of Johnny Rocket is the all-pervading mysticism that has everyone under its sway.  His face daubed in lurid red paint and his hair locked into pigtails, this is Mephisto for the patterned carpet, fag strewn beer soaked arcades of holidays you don’t want to remember.  The ones where you hoped the illuminations would fail so you wouldn’t have to see whilst praying for the lights to turn on because of what you might find, or what might find you in the dark. 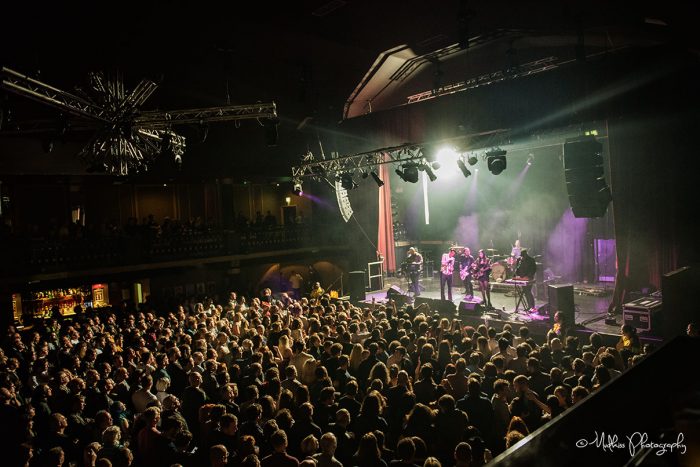 He disrobes as the show goes on, swigging from a bottle, gurning and leering but never never stopping.  His grin growing wider, his eyes wild white rapids against his crimson skin.  Prowling around the stage looking consistently disenchanted and unimpressed with the universe, the female touring guitarist whose name appears to be expunged from the archives, gives him the odd shove as he cavorts in maddening loops around her, oblivious yet right on form.  Even in the throes of apparent wild abandonment, Rocket’s voice is pitch perfect.  But then again, he doesn’t actually exist.

Tonight, it is as though we are inculcated into a protracted occult ceremony in which these rites sink their grubby Black Hanz into the jet black Manchester dirt and dredge up an incarnation of a psychedelic club singer, whose fevered gaudy hotel dream we now inhabit not at Blackpool or Rhyl, but at a seaside last resort at the end of the world. We embrace him and his wasted warpainted face as the traumatised boogie woogie talisman that he is.

Amidst all this surreal psychedelia, there is a thread of conviction throughout the performances of Pins and Moonlandingz that somehow binds them and us together. It’s the intense search, through imagination, rhythm and repetition for something transcendent, something beyond the confines of today. This is the music that makes tomorrow. And music that will make history.