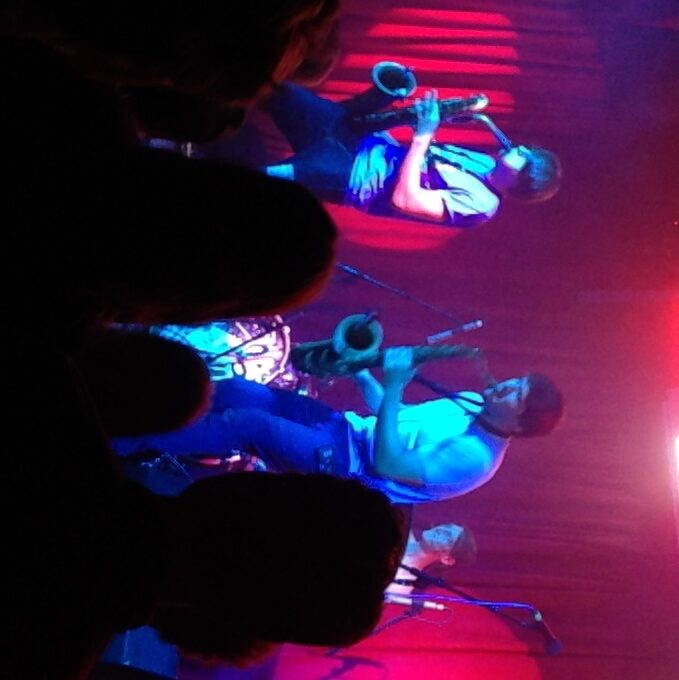 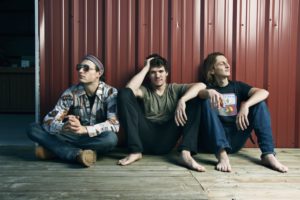 Moon Hooch have gained a riotous following over the past 12 months for their infectious jazz-based grooves. Louder Than War’s Paul Margree checks in and wigs out.

“We never intended to form a band,” gasps Wenzl McGowen, Moon Hooch’s bass horn supremo at the end of this packed to the rafters show in east London. “We just started busking and people started dancing.”

He’s exhausted, soaked in sweat. He and his bandmates – Mike Wilbur on another saxophone and drummer James Muschler, have tried to leave the stage twice. But his audience, who started losing their shit from the opening bars of the band’s thunderous techno-jazz assault and didn’t stop shaking their Hoxton arses throughout the non-stop hour and a bit of their set, won’t let ’em. Just one more tune! they holler, through the sweat, beer and dry ice haze. McGowen looks left, shrugs and Moon Hooch let rip with another steamroller lick.

Tonight’s show crowned a triumphant three-date mini tour, a return visit after a stint busking around London in the summer, log jamming the capital with their hit and run skronking antics (have a look here to see what I mean). Word must have got around because the place is heaving, with the howling and whooping starting even before the trio start playing.

The band has a streamlined but devastatingly effective template for their sound. Staccato twin saxophone motifs, as rough as heavy-sandpaper on wood, give way to fathomless bass lines – courtesy of McGowen’s baritone saxophone or, more esoterically, contrabass clarinet – and feverish soloing from Wilbur, all wrapped up by Muschler’s tightly-coiled fills. Put on your best slacks, chum, Moon Hooch are here. It’s time to dance.

Check out their Tiny Desk Concert for a pretty good example of their aesthetic in action.

‘Cave music’ they call it – tunes with a pull to the dance floor equal to house and techno, but rawer. It sure gets people dancing, though. As the band rip into the synth-clarinet driven EWI, a group of people at the front start jumping madly, from one foot to the other, like some party-crazed gorillas. There’s good-natured moshing and pogoing. A few rows back another group has their hands in the air, worshipping the track’s proto-dubstep breakdown.

There’s plenty of room for more restrained self-expression too – to my left a bespectacled cherubic chap is doing an impressively accurate version of the 80s white boy hip jive, as modelled by Dave Gahan in Depeche Mode’s early TV appearances, before they started hitting bits of metal and wearing leather trousers. To be honest, I think just about everyone in the room is dancing, including the bar staff and sound crew.

Things are kept whipped-up throughout, the set a non-stop body rock blur of tunes from their back catalogue and upcoming Eat Your Veggies EP. Song for Miguel is clattering and jumpy, while new-ish tune Milk and Waffles is a euphoria-soaked rush. McGowen and Wilbur spend at least half the gig head to head, as if locking antlers, blowing furiously. Drummer Muschler, meanwhile, is a man possessed, eyes wide, grinning from ear to ear even while keeping things nailed down and shipshape, looking as fresh at the end of the set as he did at the start.

After a final tune, and a final anecdote – this one about a police officer with a record label (or was it his friend who had the label?) – and Moon Hooch are finally off stage. Immediately surrounded by admirers and well-wishers, they share giving hugs, handshakes and sweaty selfies. They’re still at it, chatting and laughing with their fans as I shuffle off to catch the last tube, just happy to do be doing something they love with people who dig it.

There are antecedents to Moon Hooch’s sound – the frazzled melodies are reminiscent of jazz rock explorers Led Bib while the band’s rhythmic focus owes something to Sons of Kehmet’s hustling bump. And it’s probably fair to say Moon Hooch lack the sophistication of both outfits as they push out for the eternal groove.

But when you a see a room full of people immersed so joyfully in the relentless waves of the Moon Hooch sound, it’s just plain impossible to quibble. It may not be jazz, Daddy-o, but we like it.