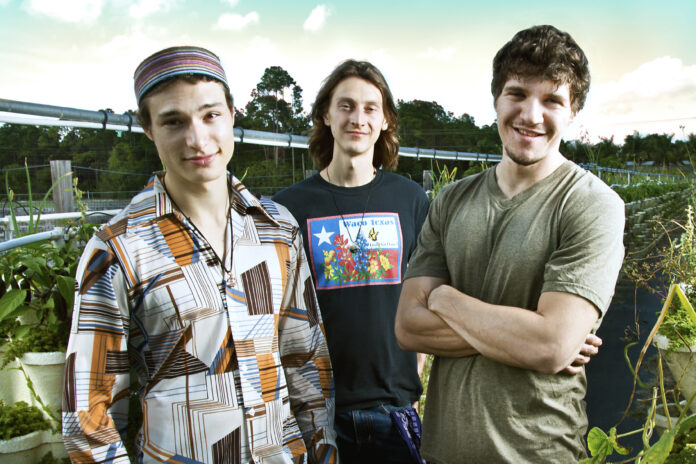 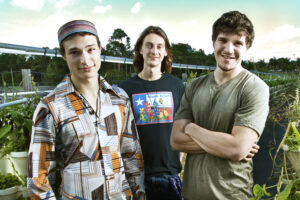 Their live shows make us dance like loons, but this time Louder Than War’s Paul Margree takes a listen to Moon Hooch in the comfort of his own home.

Moon Hooch know how to get people dancing. The Brooklyn-based sax and drums trio’s recent London visit saw scenes of Dionysian abandon usually reserved for a 3 a.m. face melter, crowds ecstatically gurning and shuffling from the very first bars of their opening tune right through til the final whistle (and well into injury time too if you count the extended encores I witnessed at their Sunday evening jaunt a couple of weekends ago).

Making people get their groove on live is one thing. Capturing that energy on record while ensuring the tracks have enough detail and variation to hold the interest of the armchair listener is quite another. How do Moon Hooch fair? Pretty well, as it turns out.

The trio are wise enough not to mess with the formula that’s been so successful for them live – chunky beats, derived for the most part from the contemporary club music landscape, overlaid with bubbling Fela-meets-Pigbag sax riffs and the odd ripe solo to season the stew.

But there’s just enough heft and detail in the production to make this more than just an ersatz live album. So opener Number 9, although sticking tightly to its live incarnation, is rendered crisply, giving our ears enough clarity to pick out the skittering hi hat and off beats that form the skeleton to its restless bustle.

We all know how much these boys love a breakdown and both EWI and Milk and Waffles expand their live versions slightly to emphasis the sonic impact of the drops. On EWI in particular, the synths and reverb mark out seemingly endless space in which the Miami-vice style horn can float lugubriously. It’s nicely done, all sun-kissed angst abruptly shortened as James Muschler’s thunderous beats whirr back into raspy stuttering life.

Mega Tubes, meanwhile, gets the most satisfying treatment of the lot, its sax and contrabass clarinet warp stretched outwards by Alena Spanger’s vocals, which float ethereally over the more rugged textures. ‘Come with me, take my hand,’ she sings, an appropriately ghostly presence in a tune so indebted to dub’s aesthetic of absence and presence. ‘There’s a place far away, you and I will find our way.’ Sounds good to me.