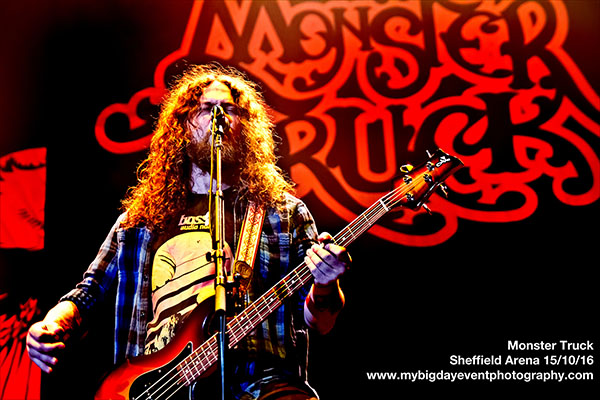 Saturday night and the Sheffield Arena is pretty much packed, even way up in those really high seats where you risk altitude sickness and the stage looks like a Lego re-enactment. Not surprising you might think given that Nickelback are one of the biggest draws in the music industry – but it’s only 7.30 and they won’t be around for an hour and a half yet. All these people are here for their fellow Canadians, Monster Truck.

The Truck have been enjoying some increased profile over the past few years with two successful albums – 2013’s breakout Furiosity and this year’s Sittin’ Heavy (Louder Than War review here) – as one of the many bands touted as the elusive saviours of rock for the twenty first century – and although they’re not the obvious tour pairing for Nickelback it’s clear from the outset that they had plenty of hard core fans in the audience. They certainly have a knack for writing the kind of upbeat, quasi-political anthems that get people singing along and fist pumping and they perform them as if they really mean them.

They open with Why Are You Not Rocking, played with an urgency that suggests you ought to keep it on speed dial for emergencies and keep the pace up throughout their set which takes in favourites like the ever country inflected By The People and bluesy Don’t Tell Me How To Live. Furiosity gets plenty of play with Righteous Smoke, Sweet Mountain River and a barnstorming The Lion to wrap things up. 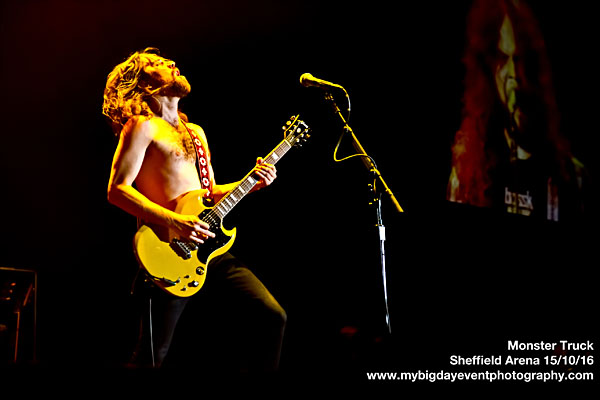 With three members of the band largely static it’s left to guitarist Jeremy Widerman to patrol the stage doing the rock and roll posturing, all bare chested and all, and laying down some damn fine guitar licks, while lead singer and bassist Jon Harvey is as good a rock vocalist as I’ve heard live in quite some time. It’s a great set and if the reaction in Sheffield is anything to go by it probably won’t be long before they’re headlining arenas themselves.

Which brings us to Nickelback.

Some bands are just naturally divisive. You either love them or you hate them. You can usually guess who will be on which side. But still. The chance to be the first person to review the mighty Nickelback in the august pages of Louder Than War is irrestible.

It’s pointless to criticise them for lacking authenticity or edge or difficulty or danger. That’s not what they do. If you want these things go jump out of a plane or something. They’re in the entertainment business and they do entertainment very well indeed. They have the crowd by turns dancing, singing along and laughing and my daughter, who came with me, is struck dumb with awe. 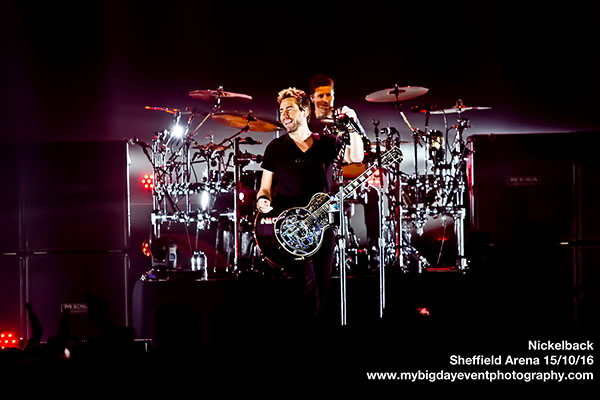 It’s amazing to look back and see just how many hits they’ve had over the years and all the favourites are there plus some you didn’t remember and however ambiguous you might feel about it there’s quite a thrill goes through you when you hear the opening chords of How You Remind Me or Photograph or Someday.

They’re certainly past masters of the art of handling an audience, switching positions, reaching out from the stage, orchestrating community singing. There’s an acoustic interlude for a cover of Big Wreck’s Mistake and a big black piano arrives on stage for Lullaby but that aside it’s the mix of soft rock and light metal for which they more or less created the industry standard. A highlight is a puncy cover of the Foo Fighter’s Everlong. For Rockstar they bring Sean and Becky on from the audience to sing along and instead of sending them back to their places after a few bars (as I’ve seen other artists do), they let them stay on stage and high in the sound mix for a Karaoke version the whole song.

It pretty much sums the band up – keep your audience happy, stay likeable and you don’t have to worry about the others.