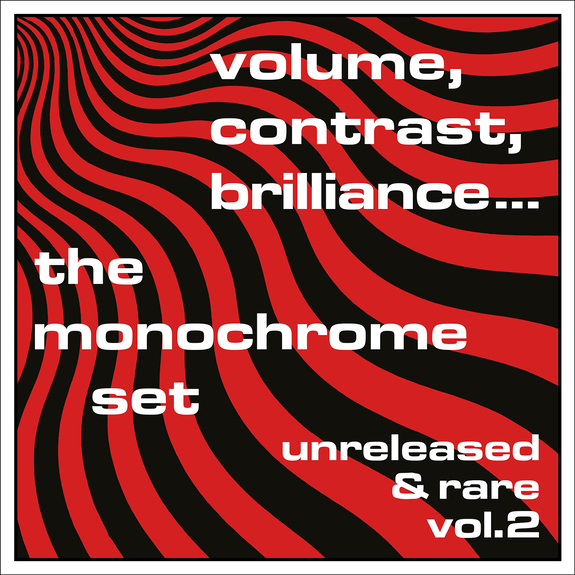 The Monochrome Set release Volume 2 of the classic Volume, Contrast, Brilliance. Mark Ray discovers if it lives up to its mighty ancestor.

For a band eternally on the fringes of success, The Monochrome Set have had a disproportionate number of compilations. The greatest of all the compilations, however, was the very first – Volume, Contrast, Brilliance, Sessions & Singles Volume 1 – which has been caressing ears since 1983. Fast forward to 2016 and we finally get Volume, Contrast, Brilliance, Unreleased & Rare Volume 2. Volume 2 covers the period 1978 – 1991 and not only delivers gems a plenty, buy also gives a glimpse into the development of the band.

The two songs from 1978 (the Monochrome Set didn’t release their first single until 1979) – I Wanna Be Your Man and Fly Me To The Moon (not the more famous songs with the same titles) – clearly show a Velvet Underground influence on their art school psychedelic aesthetic. It’s intriguing to see how the band developed into the alternative legends they are today. There was a clear shift away from the mean streets of New York that Reed sang about to more British sensibilities. Bid turned his eye upon the quirks and paradoxes of British life. Reed sang about Waiting for his Man, whilst Bid would be more likely to sing, in his melancholic voice of yearning, desire and nihilistic humour, Waiting for Matron.

With The Kinks, The Monochrome Set would go on to be the most quintessential of English bands. But where the Kinks offered slice of life vignettes the Monochrome Set feel like the outsiders at the party.

Songs like Something About You show how perfectly they can craft sixties garage pop. The liner notes tell me it was recorded 1985 but surely they mean 1965! Cilla Black is a jaunty toe tapping delight. Love is a music hall romp. Whoops! What A Palaver is sung by Bid in the vernacular and any song with the word palaver in it is an instant hit in my book. I Want Your Skin is an example of the dark places the Monochrome Set often go – the song title being a literal desire of our erstwhile romantic. Black Are The Flowers and Jack are great examples of songs that really should have been huge hits. White Lightening (an ode to LSD) and Bella Morte are different versions of supreme songs from the lost classic Dante’s Casino.

Listening to this album I am struck again what a wonderful band they are and how lucky we are to have them still recording and playing live. They inhabit that part of our record collection that is always edgy, challenging, toe-tapping and fun. When I hear them unexpectedly – like an accordionist jumping out at me at the bus stop and playing Jet Set Junta – it always puts a smile on my face.

The Monochrome Set are the half cool, half scary bunch of intellectuals who quote Proust at you whilst slipping a Whoopee! cushion on your seat.