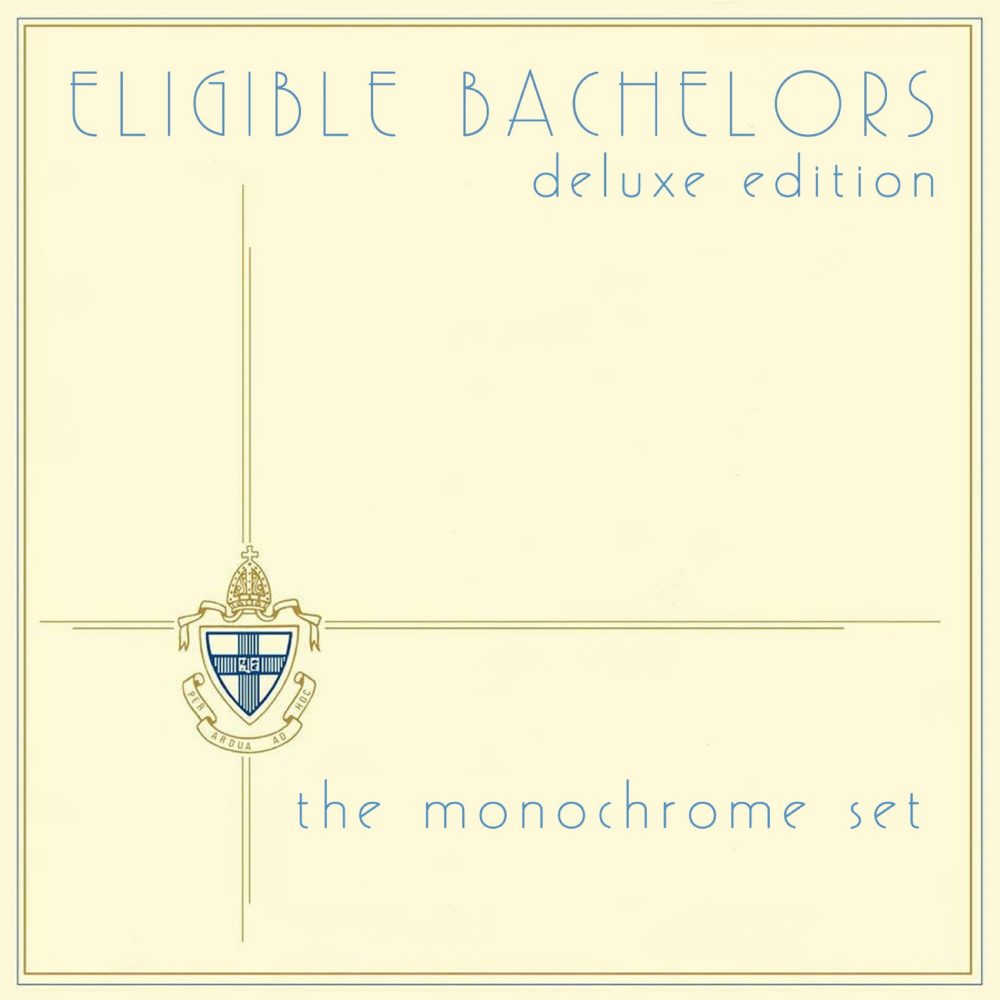 Reissue of the Monochrome Set’s third album from 1982, along with a truckload of extras including the early singles’ A and B sides, the Fin live album and Peel sessions…..LTW’s Ian Canty hears 1979’s “most likely” lads finally making good….

After a trio of fine singles in 1979 that helped establish the Rough Trade label’s reputation as vendors of all kinds of weird, woozy and wonderful artists that emerged in Punk’s wake, the Monochrome Set were one of a few that were snapped up by the majors. In their case it was Virgin, who immediately moved them across to their “New Wave” imprint Din Disc. The Set’s stay on DD was one that got them into within touching distance of fame, with their debut LP The Strange Boutique materialising on the shelves of my local Woolworths as it reached the UK Top 75. While a decent enough effort, the general consensus was that both it and the follow-up Love Zombies didn’t quite live up the promise of their early recordings. The latter, recorded six months after the debut, unfortunately sank without trace.

One of the knock-on effects of this was they found themselves without a label as Din Disc disappeared back into the Virgin mothership with only room for OMD aboard. A brief stay at Charisma’s Pre off-shoot only yield the great Ten Don’ts for Honeymooners single (which is included as an extra here). With the band in turmoil, drummer J.D. Haney (ex-Art Attacks) departed during this time which left the core trio of Bid, Lester Square and Andy Warren (who joined in 1980 after playing on Adam and the Ants’ Dirk Wears White Sox – Bid and Lester had also accompanied the erstwhile Stuart Goddard as part of his first Punk band the B-Sides) to recruit Lexington Crane to replace him. Haney’s flit was met in typical Monochrome Set fashion with them penning the cheeky ditty J.D.H.A.N.E.Y. in tribute.

By the time Cherry Red snapped the Monochrome Set up in 1982, they were a band with something to prove. Although some might see their return to the independent sector after a 3 year gap as a sign of reduced circumstances, it brought out the best in them as Eligible Bachelors was a fine piece of work and by far their best effort at album’s length at the time.

It even came with its own pair of ultra-catchy singles in The Mating Game and The Jet Set Junta, both of which could have stormed the charts is not for two points. For the latter, perhaps the Falklands was too fresh in the minds of the BBC bigwigs to give it any real airplay and the former was a little near the knuckle for the more prim DJs. Both sum up everything that is good about the Monochrome Set, quickly lodging themselves in this listener’s brain with a torrent of quotable couplets and alternately smooth and sparky guitar runs. I wouldn’t go as far as to say this record provided the blueprint for the Smiths, but the fact is there is a certain similarity, especially on I’ll Scry Again. Mainly this LP is stuffed with eminently hummable, clever and knowing Pop Music like the 60s R&B-infected Fun For All The Family or the stylish Bossa Nova of Cloud 10.

Here the original album shares a disc with the A and B sides of the Rough Trade, Pre and Cherry Red singles. This gives you a neat summation of the Monochrome Set’s independent records 79-82 and aside from the Din Disc recordings, a fine history of the band’s early incarnation. The Rough Trade singles are louche brilliance – He’s Frank retooling the Velvet Underground sound for the UK in the late 70s, slyly sending up the ultra-serious wing of the Post Punk scene, but far too irresistible for them to do a damn thing about it. Speeding up, slowing down, almost stopping in a Jazz tempo and then launching themselves at breakneck pace. They were original, that is for sure. The aforementioned Pre single is another goodie and their Cherry Red 7″s were all of marked quality too, with non-LP Cast A Long Shadow being a daffy but loveable piece of faux-Western mockery.

Disc two corrals BBC Radio sessions (and also The Man With The Black Moustache, sporting a smooth vocal and almost Swing approach, from Nicky Horne’s Capital show), demos and rarities. It has the first two John Peel sessions in full plus a couple of tracks from April 1980’s trip to the Beeb (B-I-D Spells Bid and Apocalypso are omitted, but it would be churlish in the extreme to carp given the mass of extras presented here and those tracks do at least crop up on the live selection on disc 3). These sessions show the band developing their sound and if the classic bad taste Punk of Fat Fun is a hangover right back from their B-Sides’ days, Martians Go Home points to future, with a waltz beat quickly speeding up into Buzzcocks-esque Power Pop.

Then comes demos for EMI and Do It, from their limbo period between leaving Din Disc and signing with Cherry Red. Avanti is an early version of the Ten Don’ts single and The Ruling Class, which takes Lonnie Donegan’s My Old Man’s A Dustman and turns it on its head, a pointer to the coming LP. The rarities which make up the remain 11 tracks on this disc have cropped up on various El and Cherry Red comps over the years and seem to catch the band developing ideas that would be put into practice on the Lost Weekend LP. We Are Zarbie has a nice 60s Psych feel and It’s More Than Just Love goes even further back, taking an influence from the early Beat bands.

After the critical success of Eligible Bachelors and a good showing on the then important Independent Charts, the Monochrome Set were up for another go at the big time. On this occasion it was Warners who took the bait, but despite being on long-term Monochrome fan Mike Alway’s Blanco Y Negro subsidiary, it was very much a problematic sojourn. The Jacob’s Ladder single was another near miss, a lot of early high-profile TV and radio exposure was lost by the label not getting the record into the shops. The resulting album The Lost Weekend didn’t make the impact it deserved and the band split, with the live Fin album emerging 1986 as an after-the-fact reminder of the band.

This live album (also re-released on Richmond under the name The Good Life 1992) was one of the first releases on the El label and comes from a variety of sources. It is in truth is a little rough sounding in places, but on the up side it takes in performances through the years right up to the split, which offers up some material from Lost Weekend and both the Din Disc albums. Heaven Can Wait from 1981 is an early version of The Jet Set Junta with different lyrics and the Punky/Funky Apocalypso single is given a good live outing. Appended to this is a “late in the day” demo Up and three Bid solo items of which the lovely Reach For Your Gun is probably the pick.

Eligible Bachelors: Deluxe Edition does a fine job in bring together the best material the Monochrome Set recorded in their first flush. The album itself is one of (if not the best) they ever turned out and the single tracks recorded around the time prove the frustrations of their time at Din Disc had merely served to push them on to greater things. As always the BBC sessions are well recorded and capture a band in rapid development. The demos and live stuff featured on disc 2 and 3 give us a snapshot of the Post-Eligible Bachelors band, ready to go and try and take on the world again. If the world wasn’t too inclined to listen, it wasn’t for the want of trying or for the quality on show. The Monochrome Set at this point in time were unique and wonderful, prizing intelligence and taste over the mawkish 80s “endless party”. Their music has stood the test of time far better than the version of the “80s” you will hear on the radio, offering a much needed alternative to the New Romantics etc. A great album given the treatment it deserves.