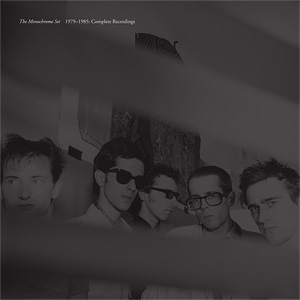 Way back in the murky depths and quagmire of a music scene barely recovering from the spit and snarl of punk, a band emerged with great riffs, acerbic and arty lyrics, and a nice line in smut and the surreal. Whilst punk was tamed and sold to the masses, The Monochrome Set released four albums and innumerable singles of utter beauty and genius. And not many people at the time noticed. They broke up. Not many people noticed. They re-formed. Not many people noticed. Now Tapete are re-releasing the band’s first four albums and collection of singles. It’s hard to imagine that there will be a better re-issue all year.

The Monochrome Set could be said to be the missing link between The Kinks and The Smiths, but this is a bit too simplistic and easy: you might as well say they are the missing link between the Carry On films and Grand Guignol. They are a great band in their own right with innovative, influential, clever, funny, and just bloody good songs. Any band would be happy to have written a third of these songs. Songs of love, hate, horoscopes, cowboys, zombies, double entendres and grisly murders, they are all elegant compositions. The Monochrome Set were, and still are, smart, danceable, foot-tappable, and raise pop into surrealist art. It is the shock of the old, reworked and pushed to limits. For all their archetypal art school sound, it comes as a surprise to find that the elegant lead singer, Bid, never even went to college.

The band’s first album, Strange Boutique, released in 1980, opens with a manifesto of sorts, a declaration, presumably tongue-in-cheek, of all the things the Monochrome Set will bring to your tiny mind. It’s a near perfect debut album, with 11 great songs. The Lighter Side of Dating and Espresso are so almost perfect they hurt. Ici Les Enfants, with its disconcerting rhythms and lyrics, explores the darker side of desire, whilst the title track has an evil sound, like psychedelia gone rotten. It’s a serial killer in paisley loons. And Goodbye Joe is one of the most beautiful, melancholic songs I’ve ever heard. It conjures up a mist of memories, a smoke of dreams, a technicolour haze.

Love Zombies came out later in the same year and, whilst not as utterly brilliant as Strange Boutique, it is still captivating. The cover had subtle, minimalist lines to convey a naked body in repose, which reflected the amount of imagery the band could create in the brevity of a pop song. The title track had a disarming, original sound to it, and foretold the current fascination of the modern world with zombies. 405 Lines (the Monochrome Set, for all Bid’s incisive lyrics, were always also a great instrumental band) sounds like a soundtrack to a silent movie. RSVP gives us a humorous French lesson from Bid with its faux jazzy beat and random French expressions. It’s a cut-and-paste job. Its randomness an exploration of what actually makes a song. Bid sings the words like they have meaning, structure – but they don’t. Kama Sutra sounds like a lost Beatles song. The Man With The Back Moustache is classic TMS, with its quirky guitar line and rhythm. A beautiful song about a man who’s a nobody. Except for his moustache.

In 1982 the band moved to Cherry Red and released Eligible Batchelors. The album includes the utter glory of Jet Set Junta, which raised the status of a pop song to a higher level and in any other universe would have been a smash. Even being banned, in the erroneous belief that it was an anti-Falklands-War song, didn’t help sales. Other stand-outs include I’ll Scry Instead, a beautiful, sad peon about a hopeful letter to a fortune teller; the great satire of Fun For All The Family, where we see the beauty of allowing fools to speak for themselves; the gorgeous Midas Touch and the still savagely funny attack on the upper classes of The Ruling Class. It also contains the greatest and funniest song about sex I’ve ever heard: The Mating Game.

After a financially disastrous American tour, the group signed to a major for 1985’s Lost Weekend. Although more pop-orientated and slicker than the previous albums, it still contains some absolute gems. The opening track, Jacob’s Ladder, received their biggest airplay and is a great song about a wedding day. Perhaps prophetically, considering the band would break up for the first time after their ‘failure’ to make money for a major, the song is followed by the wonderful Sugarplum, about a disintegrating relationship into paranoia and infidelity. Letter From Viola is a funny and sad song delivered in a ‘Dear John’ letter form. Don’t Touch is a great song about obsession with heroes and Wallflower a catchy little number about the boring, unattractive one at the party. Cowboy Country (cowboys are a consistent, if not ubiquitous, theme in the Monochrome Set’s career) is a stunning, elegiac song to end it all on.

The final two discs compile the band’s singles, which just proves that The Monochrome Set were a great album and a great singles band. Their debut release was He’s Frank, a stunning piece of indie-pop that combines the arrogance of youth with the genius of writing for the sheer pleasure of it. Alphaville is a coruscating little number that gets into the head and never leaves, whilst Eine Symphonie Des Grauens has a vicious beauty. Silicon Carne is a great rock song dripping with despair, whilst Ten Don’ts For Honeymooners is still funny after all these years of listening to it.  Cast A Long Shadow is something of a forgotten classic, and then there is the aforementioned Jet Set Junta.

The Monochrome Set are still a going concern and they have been knocking great albums out quite regularly over recent years. Live, also, they are a great band. But, take time to re-visit their beginnings and glory in a neglected, rich body of work.

You can find The Monochrome Set on line here, and they are on Facebook.