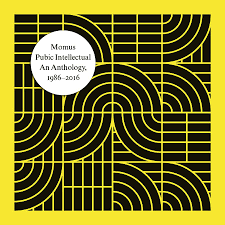 First career anthology for Momus aka Nick Currie spread over 3CDs with observations from the man himself on each song….LTW’s Ian Canty recalls a mid-80s crisis of confidence of his own and on its resolution raises a soft drink by means of a toast to a Maoist Intellectual, the Ray Davies of marginal human activity….

On Momus’ arrival on the Independent Music Scene with his “The Beast With Three Backs” single, I have to say I was a little perplexed by the man and his music. It was the way he was portrayed (through the music press mainly I think), perhaps I considered myself either too thick or too lazy (or both) to fully grasp the references to French philosophy and the subtle nuances contained therein to be able to completely appreciate what was going on, intellectually at least. I have always been someone who more valued “the immediate pleasure” (as the Eyes so memorably put it on their classic 1966 single) in music, the fast, easy satisfaction of Rock N Roll, that “sound of right now” thrill, rather than having to go and read up on something before I can enjoy it. Apologies, but that is me and perhaps can excuse my reticence with regard to Momus at the time.

Lending an ear to this pot-pourri of his work it occurs to me that I may have been sold a bit of a “pup” by the pre-publicity, because 1. Momus always married whatever he was saying in his lyrics to a decent tune and 2. if you listened he more often than not had something of interest to say that even a relative clod like myself could work out. The fact that his music isn’t more celebrated is a real shame and it may have something to do with this very issue, maybe with being seen as “clever” as the sleeve-notes state. There he is compared to Green Gartside (which I can see) and Paddy MacAloon (which I can’t) by Michael Bracewell, who infers that in Britain being termed clever is close to an insult, which I suppose is more or less true. It can put people off and I cannot honestly declare that wasn’t the case with me also. Having said that, let’s put aside the artsy fartsy concerns to try and enjoy this prime assortment from the man’s career for what it is.

Born in Paisley, Scotland as Nick Currie (Ie shall refer to him as Momus from now on), he first started to make his mark on the edges of the Postcard Records scene. He became the singer and guitarist in the band Happy Family during 1981, an outfit which included two members of the recently split (and brilliant) Edinburgh group Josef K in Malcolm Ross and David Wendall (later to be joined by Ronnie Torrance bringing it up to three ex-Josefs). This aggregation recorded a single and an album for 4AD before disbanding after two years. Looking to get away from the “band format” after the frustration felt during the Happy Family years, this led to his solo project as Momus, which is where our journey and this compilation begins.

At first musically he seems to resemble 70s singer/songwriters like Nick Drake a little, albeit one that has been given a huge jolt of Punk attitude, with gentle acoustic guitar meanderings plus occasional instrumental flourishes with the faintest dabs of 60s Psych Pop, contrasting markedly with the acidic lyrical approach. “Murderers The Hope Of Women” sets the tone in terms of meditations on the darker side of life, putting himself into the mind of a killer in a chilling fashion. Momus never shied away from taboo subject matter much like one of his key influences Serge Gainsbourg and resembles the master with his work similarly being full of detail and images that flash by in a torrent of words. He details the traits of his characters in such a manner that it feels to the listener like they live and breathe, whatever their dark machinations and obsessions. This leads me to think he writes much more in the mode of a dramatist than a pop music writer. A vital component with this set are Momus’ thoughts on his oeuvre which accompany each song, so I suppose a lazy get like myself doesn’t have to do the swotting up I normally might have to and into the bargain his jottings manage to be both hilariously bizarre and informative.

By track five here “Closer To You”, the musical palette changes a little, though the lyrical concerns of outré circumstances remained. A stripped down electronica now provided the canvas for the observations from the marginal side of human behaviour, like a laid-back, much darker and more verbose Pet Shop Boys (the dancing synths on “History Of Sexual Jealousy Parts 17-24” are a case in point) though the grimy cityscapes of the sleazy mind-set of Soft Cell are probably the closest comparison. “The Homosexual” is an ample demonstration of Momus’ talent as a storyteller; based on a story about a indie media executive who had an affair with a music bigwig’s wife and got away with it because he was thought of as gay when he wasn’t, it is as pleasing an example of his craft that there is. Funny, dry, wise and impeccably observed. Though you get the feeling that Momus exists in his own world and works to his own peculiar rules, there is some ground given to the changes in contemporary pop music, with Hip Hop scratching in the background of “How Do You Find My Sister?” and the proto-House sound of “The Hairstyle Of The Devil”. His 1989 LP “Don’t Stop The Night” featured both of those tracks and was filled with such delights, adding up to what is probably his most commercially successful LP.

He certainly could (and probably should) have had hit records around this time, but of course radio around then had only just got over the Frankie Goes To Hollywood “Relax” furore so the unadventurous DJs of that era were hardly going to take a punt on Momus and his unusual (to say the least) approach to writing words for pop songs. Plus the fact his record label at the time Creation were not the powerhouse they would become about 6 years later on (by which time Momus felt hopelessly out of step with the Oasis-type Lad and Dad Rock that dominated on Alan McGee’s label by then) and perhaps could not give his records the push they deserved. For whatever reason it did not happen but much of what is here is as catchy as anything that made the hit parade at the time and has endured far better. Indeed it is also hard (but possibly uproariously comical too) to imagine Momus on one of those 80s revival gigs!

Moving on into the 1990s on the second disc here (the three discs broadly break down into a disc each for the 80s, 90s and the final one being for this millennium), Momus further embraced dance elements into his sound, whilst spectral synths enhanced the dimly-lit and sleazy mood. “Voyager” sports that type of “plinky plonky” piano run that dates it a little in the neighbourhood of 90s House Music, but otherwise is a touching account of the aging process. This section of his career does seem a little more upbeat and hopeful (“Rhetoric” is quite beautiful), following on from that Acid vibe, but there are always the little doubts and uncertainties that means his recordings shy away from the easy wins of the Ibiza/Ecstasy crowd into something more substantial. “Last Of The Window Cleaners” is one of Momus’ efforts towards the soft-shoe shuffle of Vaudeville, but puts me in mind also of the songs Benny Hill used to do, though I should say it is Brechtian which would make me look smarter than I actually am (n.b. it’s in the sleeve-notes). As the 90s went on the Dance element appears toned down a little, the tracks here seem like the twilight world flipside to St Etienne, downbeat Trip Hop/Electro for confessional tales and late, late nights.

A legal battle with “Clockwork Orange” soundtrack composer Wendy Carlos necessitated that funds had to be raised via a “portrait album” (you paid for a song and he wrote one about you) entitled “Stars Forever” in 1999. Even here he had fun with the concept as “Tinnitus”, ostensibly about a Boston DJ, turns into an electrified jig and reel meditation on the Scottishness. As the new decade dawned though, you can hear the more relaxed nature of someone at peace with themselves having fun, free of any commercial constraints there may have been in the past. No-one expected hit singles and huge sales figures, so he would be able to go about his business unfettered by outside concerns. In another world, the effervescent wobbly pop of “Pygmalism” (from 2001’s “Folktronic” LP) could have been that elusive chart record, it is wonderful and more memorable than any smash I can recall from that year. “Bewoulf (I Am Deformed” is a compete contrast, influenced by French Chanson, a litany of the grotesque, a great jerky beast of a song. The unusually high pitched vocal of “Widow Twanky” serves up another googly for the unsuspecting listener – the story of a jilted lover dressing up in his ex-partner’s clothes and thereby keeping part of the lost love – incredibly odd and yet more proof of the artist’s highly original mind.

It would be an awfully long review if I detailed all the songs here and the tales told therein, but suffice to say that Momus had a rare gift for words that latecomers and pretenders could never hope to get near and the likes Jarvis Cocker and Neil Hannon can only wonder at. Though the sounds and tempos change, there is always no mistaking that this is Momus you are listening to and how many other artists mark out their ground so clearly? As I suggested before, the extensive sleeve-notes by the man himself bring the lyrics into sharper focus sometimes, other times not so much, but they’re an engrossing read even without the music.

Sometimes confessional and clear, other times elusive and opaque, whether an active participant in the song or a detached voyeur. Ever-changing but always recognisable. I’m sorry not to have solved the conundrum of Momus, but I’ve enjoyed trying. Things never travel in a straight line here and there are no easy answers, which makes things all the more appealing for the enquiring mind. This boxset takes you through his work in an expert manner, from acoustic guitar wielding sex-obsessed Francophile, to caustic Acid House commentator, to laidback Cold Wave time traveller and onwards, it is all here. Welcome to the world of Momus, much like our own, but shot from an entirely different angle.