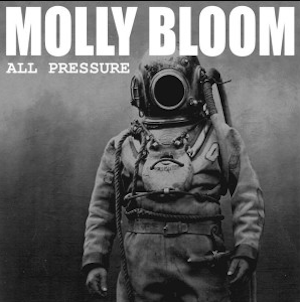 What started as blunder turned in to a festival highlight, and now Sophie Sparham relives her weekend by way of the new album from Molly Bloom.

When I first discovered Molly Bloom, I was at the punk festival ‘Nice and Sleazy’ and assumed that the band was actually a woman performing a solo acoustic show.  Oh how wrong I was. However, what started as a blunder; became one of the best mistakes that I had ever made.  So I was not surprised to find that their album was just as captivating as their performance.

The album kicks off with the catchy tune ‘Last One Rings Out’, which slow build up easies the ear in gently for the full throttle sound that is Molly Bloom. A few songs in and it’s obvious that one of the prominent sounds of the band is their traditional, folk edge, which give the album an upbeat feel and is perfect for getting your dance on.

However, in contrast to the folky, comes the downright creepy. Both Steve Dundon’s vocals and lyrics give a real theatrical edge and a chilling atmosphere to Molly’s music.  Songs such as ‘Come Creeping’ and ‘Blood’ takes you to a cold, dark night, in which Dundon presents himself as the villain.

Something extremely distinctive about the band’s sound is the use of the flute, which can be heard in tracks like ‘Run If You Want To’; in which the  furious way the instrument is played is a bit like listening to a rock version of Ron Burgundy, minus the 70’s hair and suit.  It’s also mixed with the beautiful instrumentals, that simmers the madness and calms the pace throughout.

Even now, after listening to ‘All Pressure’ about twenty times, I am still changing my mind about what I’ve heard; all I know is, it’s damn good. Molly Bloom are the perfect example of how genres can be mixed and classical instruments can take on a whole new meaning. ‘All Pressure’ bring something new and exciting around every corner and if you like the album, you have to see the many layers of Molly Bloom live.

All words by Sophie Sparham. You can read more by Sophie by visiting her author’s archive here.