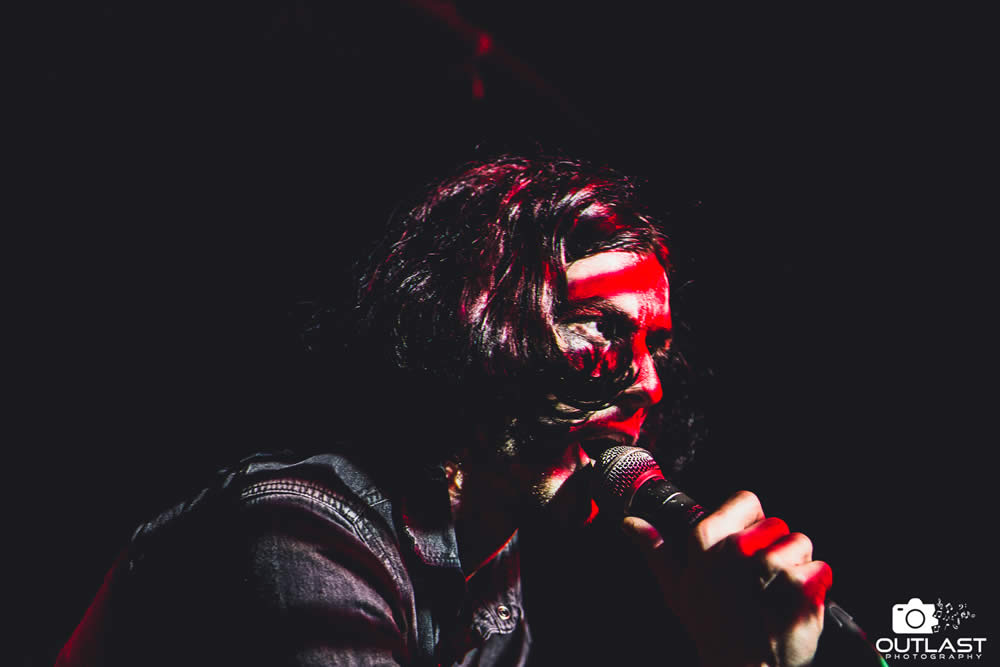 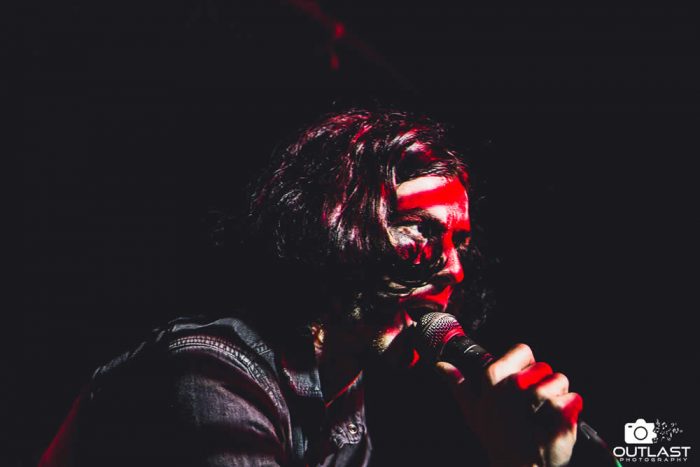 MOLD confirmed their status as Manchester premier art-punk band taking the world of post Cabbage wonk to a new level at The Soup Kitchen on Saturday night. Nigel Carr reports with photographs by Jack Walsh at Outlast Photography.

MOLD are creating a post-chaotic mayhem on the fringes of Manchester’s burgeoning music scene with their unique style of stop-start, quick-slow, random-rock meets art-rock panic. There is nothing like them right now, and the only way I can convey what MOLD sound like is to take one-part The Residents, one-part Zappa and two parts Trout Mask Replica era Captain Beefheart and put them in a blender that’s been sitting in Withnail’s sink for two weeks!

Guitarist and singer Dan explains: “It’s absurd, we take the world around us, we live in rotten times, and we try and reflect that in a silly way, as silly as you need to be – we have never sat down and said ‘let’s try and do what this (another) band has done’ ever, that is the antithesis of MOLD, trying to do what has been done, trying to emulate. 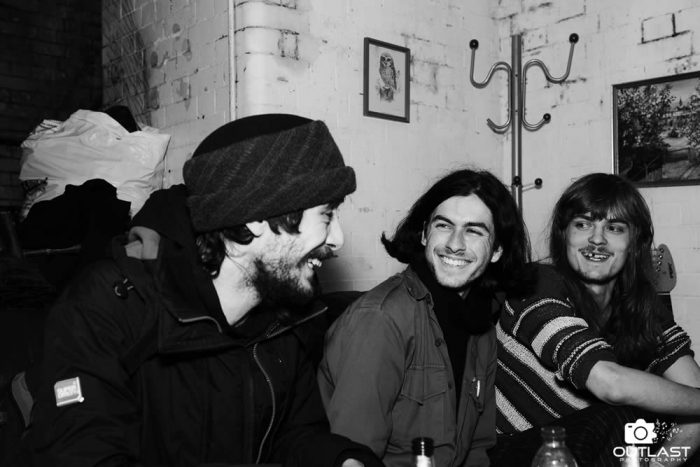 The band relies on signature changes and structures that challenge the traditional 4/4 way of songwriting, Dan: They are really calculated things, all the songs go through a meticulous process and are intensely rehearsed, trying to think about the emotions that are conjured up”, Drummer Sam: “There’s a lot of feeling in there as well.”

I first saw this band at The Castle about a year ago supporting The 99 Degree and they have developed quite a bit from then, Dan: “It’s a brand new set, we don’t stop, it’s just one fluid piece of music. The songs are all written quite precisely, but we have come up with segues to go in between. Bassist and vocalist Shane adds: “We just didn’t see the point of standing there chatting to the crowd, Dan: “No one gives a shit what we have to say, we are wearing make-up, It’s already in the character, imagine if you went to see a play and they stopped for applause or they stopped to say ‘hey thank you’, fuck off! no one cares, we’re not there for the applause.”

Dan explains about the themes of some of the songs: “It’s more social commentary, if you take something from our lyrics then that’s fine, but if you don’t that’s also fine, Sam: “taking bits of humanity from any point in time and trying and build that bridge. Dan: “Allegories, a way of getting the message across!” 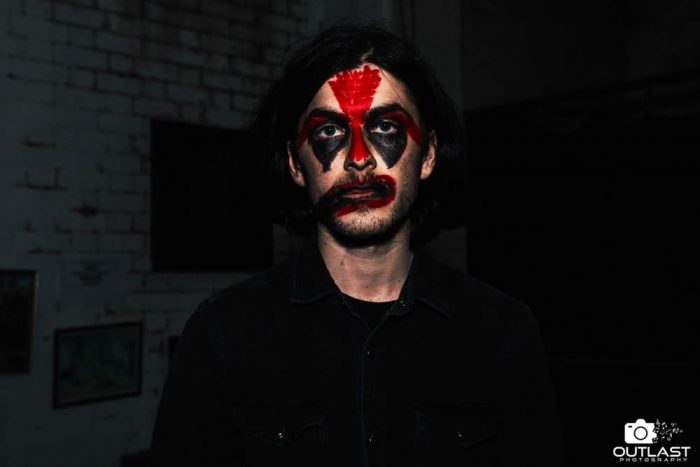 The band thrash out the songs during jam session rehearsals rather like early Verve with the two frontmen sharing lyric writing duties, Dan: “It’s a collective effort”, Shane: “we are really good at jamming”, Dan: “we make an effort to jam for an hour, then go ‘that was good’, pick out that. That leads into the live set segues, pieces of improvisation can turn in to continued segues, layering improv on top of that which becomes structure. You’ve got to have a silent conversation on stage and it’s Intense practice like 3 or 4 days a week.”

As we come out of the dressing room support, ILL are onstage, squealing their unique style of visceral punk into the faces of the Soup Kitchen crowd. Whitney, their Latvian lead singer/bassist and keyboardist Harri are in an all-out aural assault which sees the pianist jump into the crowd and punching them away before dropping to the foetal position screaming “horseshit motherfucker, get out of my house motherfucker, I hate you!” – echoing their bio as one of their ‘rage-filled sonic meltdowns’. It’s intense but the crowd is on their side and it’s fresh and exhilarating!

I expect to hear a lot more from this band whose first album We Are ILL is out in May.

Next up, MOLD takes to the stage. we’ve just been watching them slapping their trademark black and orange make-up all over their faces in geometric shapes. MOLD war paint maybe… They are joined on stage by Mitch on extra percussion, Joe on organ and Andrew playing the saw!

They lunge into The Death Suite, an eleven-minute freak-out which starts out rocking along, in what you’d consider familiar territory, before changing pace and darting in seemingly random directions, like a pissed up fly looking for somewhere to land! 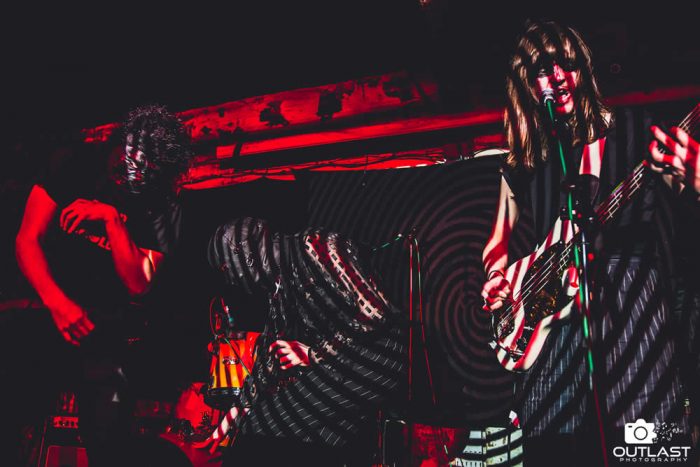 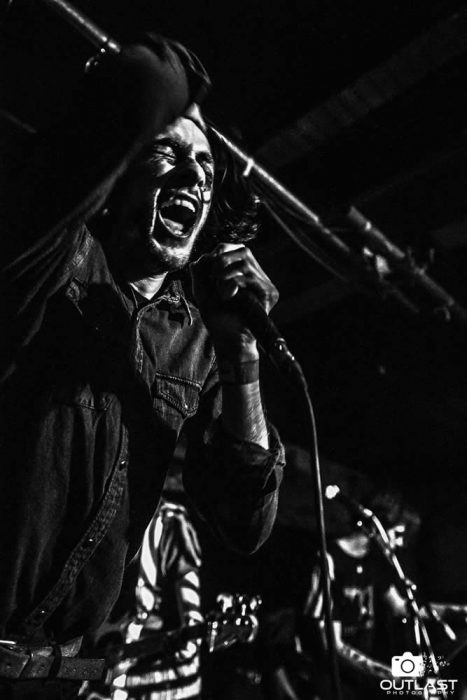 Dan’s vocals remind me of Jello Biafra’s but there’s so little that’s current or gone before that you can compare this to it’s just invigorating, and you just don’t want it to stop. The closest analogy I can make is Bingo Master’s/Repetition era Fall but even that is not doing it justice.

The music flows in one complete piece connected by the sonic segues Dan described earlier, barring one slight pause for a hi-hat/drum problem. Rattling through a cover of The Residents’ Six More Miles, their only nod to bands past, they crash into new single, and the reason we are all here The Puppetmaster. Adding to the bizarre, they are joined onstage by one gimp masked girl, another with mask and dreadlocks, and Guy the gorilla! It’s fucking mayhem and I love it! Even without a drop of beer inside me. 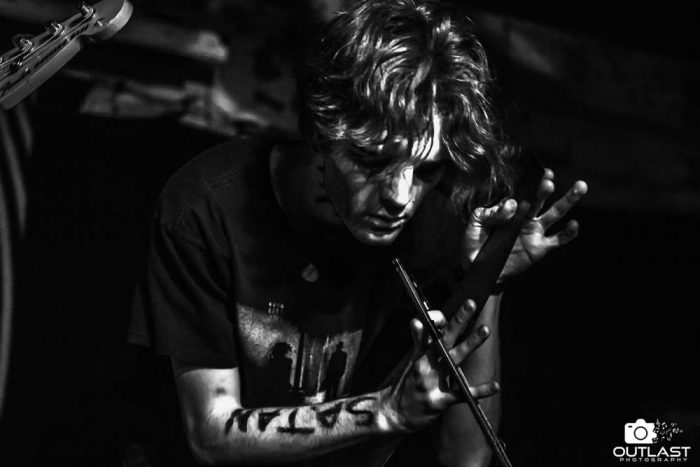 The music builds and builds to a crescendo with the two protagonists screaming into the mic; its fractured delivery and craziness, amplified by the bizarre antics on stage as the energy and excitement spill to a thunderous close. At one point Dan jumps into the crowd and literally punches the guys standing around in the mosh pit one by one, before diving back on stage to finish the set.

After forty-five minutes it’s all over and the only thing I want is more!

We need more bands like MOLD, the country needs MOLD – pushing the boundaries of what’s normal and acceptable as the perfect antithesis to vanilla, hup-inducing indie. They are playing a number of dates around the UK starting on March 12th at The Castle, Manchester.

Listen: Puppetmaster on Spotify including the Redux version!

All words by Nigel Carr©,  More writing by Nigel on Louder Than War can be found at his Author’s archive. You can find Nigel on Twitter and Facebook and his own Website Photos© by Jack Walsh at Outlast Photography who’s also on Facebook and Twitter