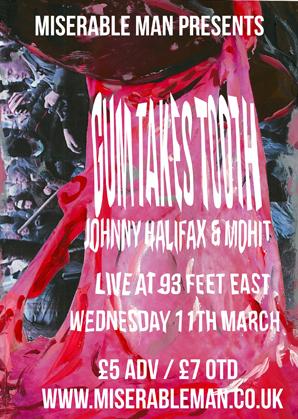 Louder Than War’s Keith Goldhanger returns to 93 Feet East to catch Gum Takes Tooth, and, not getting too hung up on the price of a beer, lets us know how it was.

FIVE POUND FUCKIN’ FIFTY A FUCKING PINT !!.. Sorry, I promised myself and those around me I wouldn’t mention it….It’s been a long day.

Beginning by staring at a young chap sitting opposite on the Jubilee line who someone not a million miles from this keyboard had seen grace a stage as a headline artist in an established North London Venue a year or two back and still hasn’t returned due to said artists inactivity but will eventually because we know he’s got a new album coming out soon.

We didn’t chat – this is London – we’re not pissed enough at 10AM to point and shout his name out loud as one of us did last time we were standing in the same room and we’re certainly not going to get drunk on these bar prices twelve hours later after the sun goes down over East London’s Brick Lane.

Welcome to London 2015 – Home of the stars, pavements paved with gold, bikes sponsored by banks, a chicken shop on every corner and beer costing…..OK I won’t mention it again.

Actually I will (sort of) …The last time I mentioned the (first) Five pound pint I purchased (21st July 2013)  I received an Email from someone telling me I’d chosen the most expensive beverage on the menu, therefore I’m sure those taps with the empty plastic vessells hanging procariously over the handles this evening will be pointed out to me at some latter stage of my life as “Not as expensive as £5.50”.
Anyway, we were never coming here to get drunk on a school night and it feels like we’ve not been here for ages.

MOHIT mount the stage, a three piece jerky, jazzy combo with strong vocals from all three guys and individual songs that feel they’re made up of half a dozen short ones. One of those bands we scratch our heads at wondering what they’re doing but (more importantly) acknowledging the fact that THEY know what they’re doing. Always a good thing. Test pressings of a forthcoming split 7″ with Brighton’s Flash Bang Band were spotted and necks were craned to have a look (Black vinyl, white lable 7″ diameter and plain sleeve – nothing out of the ordinary to look at yet but covers and labels will already be at the printers by now we imagine…)

JONNY HALIFAX, another trio are sitting, yes sitting on their rickety chairs, sometimes leaning back onto the rear two legs (…and I hear in my head my school teacher still shouting at them and asking if they “sit like that at home?”). Guitars are horizontal on their laps and there’s a big gong the drummer seems to be hidden behind. There’s a big moustached guitarist and a man sporting what we’re calling this week a “Jesus Christ fashion beard” or as they say in France “Barbe” – This is mentioned for reasons we may come back to at another time during another event in our lives. Alternatively you can google or youtube these words and work it out yourself and maybe, like some of us around these parts this week, discover something rather ace (and unrelated to this gig) that you may want to sing along to. (https://jesuschristfashionbarbe.bandcamp.com/).

Jonny Halifax gives us the comfort and warmth that we crave for. We feel rewarded when we walk into rooms like these during the week and for a short time we’re standing, smiling, and patting ourselves on the back in recognition of our successful venture out along the cobbled streets of the Capital. We forget all our troubles and wonder what sort of people sit at home hunting this stuff down and decide to stick them all on a stage so people like us may wander in to appreciate what’s put in front of us (and moan about the refreshments).

Miserableman.co.uk is the address on the flyer the man in charge gave us once we’d been self introduced in front of the man with the moustache (now without guitar and band beside him).

Jonny Halifax loops the odd guitar riff, reminds us of a screamier Spaceman Three, presses all the right buttons on the pile of effects lying down by his feet, grabs a mouthorgan as the guitar loops by itself and it’s like watching a psychedelic Sea Sick Steve (and hearing him with Factory Floor as his backing band) thrash around whilst sitting down, lurching backwards and forwards, peddle steel style but with what I believe are conventional guitars. The drummer keeps it all nice and simple in the background – The evenings winner in our books. We raise our empty glass in appreciation.

Where Jonny Halifax won out hearts by throwing a few surprises during the set to maintain our interest the same couldn’t be said for GUM TAKES TOOTH. Living in a box alongside some of our favourites that go by the names of Fuck Buttons, Holy Fuck, AK/DK, or Doldrums to name a few, one had the feeling that maybe tonight was not the night to turn up with these pre conceived ideas. Listening to their recorded output it’s noticeable how mad, exciting and hypnotic their tunes are. This evening, maybe due to the sound levels it sometimes felt we were nodding our heads to five minute drum solos (very bloody good drum solos it has to be said) accompanied by some great electronic wizardry that throbbed along and wizzed around simutaneosly. When the spacey vocals kicked in it was a lot like DOLDRUMS but with a more basic rock feel than the dancy ravey, dubby stuff that the Canadians have produced. Gum Takes Tooth recordings are great and we’ll be going to see them again I’m sure. They’ve already earned that as we’re still listening when we get back home to our living rooms. It lacked any disco beats, or raving bonkers arms in the air moments and we didn’t get any tunes that would make us want to whistle on the way to work in the morning. We didn’t get the joy of an unexpected tempo or even gendre change mid song and nothing made us jump once each tune began. This may read like a panning but it shouldn’t do, this is a good band but one that needs to be seen again. We did get plenty of loud bits and quiet bits though which were basically controlled by the drummers physical assault on the kit and the very keen limited use of the small cymbal that every now and again went “Ding!”

This is a band still on the verge of creeping into our lives one day and those that dragged their feet to attend were certainly not static observers, however on this evenings event the Goldhanger jury is still out.

We arrived thinking this was a forgone conclusion, one of us had looked temptingly on the t-shirts before spending what would have purchased more than half of one had they not visited the bar. There’s a few cd’s and slabs of vinyl with the Gum Takes Tooth logo emblazed on them – These we recommend.

This is London – loads of great gigs, sulky old gits complaining about the beer and sitting on metaphorical fences but simultaneously adding even more artists to their favourites list and recognising to hold back a bit when being far too excited before attending an event that is yet to begin.

Small regrets at bedtime but better than sitting at home watching a country discussing a tweed covered tv presenters crumbling career and asking …who ?