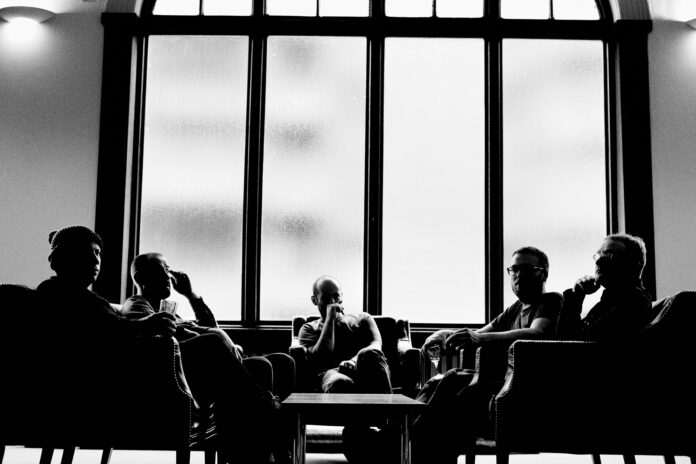 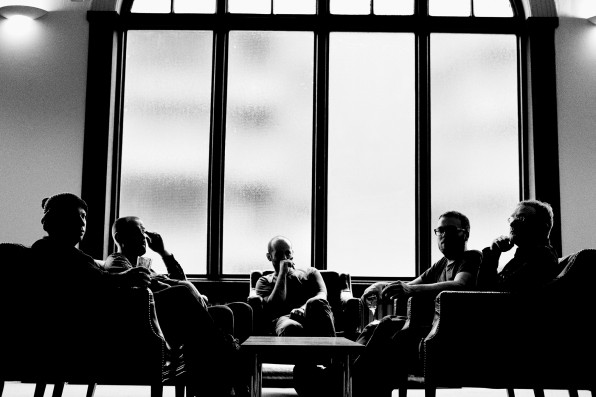 Mogwai’s most recent album, Rave Tapes, dropped last Monday and seems to have been met with almost universal acclaim (e.g. check out our review, a perfect 10 / 10). The masses seem to have finally discovered the band, famously championed by Peel in their early days, as, after nigh on 20 years together, Mogwai bounced straight into the top 10 in the national album charts last week.

We at Louder Than War have been following Mogwai since those early days, so needless to say when we were offered an interview with the band at the end of last year we jumped at the opportunity. Simon Tucker took on the job of coming up with some questions for them, something he did with the help of his brother, Matthew, also a long time Mogwai fan. His questions were duly answered by the band’s Barry Burns.

This interview completes the hat trick for us – and Mogwai. A link to the album review can be found above and yesterday John posted this live review.

Louder Than War: Firstly, huge congratulations on Rave Tapes. It’s an incredible album. Are you happy with the extremely positive reviews that it has been receiving?

Yeah, thanks, it’s nice to see that people generally like it. There are the usual folk who hate it too but splitting opinion is actually quite a good thing. We are Marmite and Marmite’s been around for years too.

The album is an extremely modern sounding one, yet it also seems to touch on every aspect of your back catalogue. Is it tricky for a band such as established as yourselves to continue to evolve and develop your sound whilst keeping the original ethos and ideals that you had when you started?

Yes, it’s a genuine nightmare trying to get new songs together but it’s good when you finish the work and can start to try to enjoy playing it.

How different is your approach to making albums now from the early days of your career?

They’re much more “done” in the studio than the rehearsal space these days although the writing of the basic part is done separately before we meet up and share our ideas with each other.

Were there any particular influences on the record i.e. albums/films etc?

The Flaming Lips last album and the Boards Of Canada one plus a bunch of far less listenable stuff than that. John Carpenter had a big influence on the record too.

There are certain songs on the album (Remurdered is a case in point) that has a large electronica feel to them. Is it difficult to get the blend between this and the more traditional instrumentation right?

Yeah, sometimes it is tricky but that’s how you work through music composition and arrangement. There’s so much trial and error until consensus is reached. Or not.

Speaking of Remurdered, the tune is a highlight on an album full of them. Was it the obvious choice for the first single? It does seem to be the song that perfectly encapsulates the entire album. It’s also an absolute killer live track (I was lucky enough to witness it live at the recent ATP End of an Era 2).

It’s funny, I’m only beginning to tolerate it as it’s played a little differently live. I didn’t like it at all after it was mixed but the others did so it went on the record. It’s not really a single, just a free sort of giveaway thing but yeah, i suppose it worked.

In regards to the ATP gig, how did it feel to be closing the festival and were you nervous at all about premiering five new songs off an album that had not even been released yet?

In retrospect it was pretty brave, a little selfish perhaps! But there you go, we’re useless at following the normal, sensible ways of doing things.

Blues Hour is one of those gorgeous vocal led Mogwai songs in the same vein as CODY and What Are They Doing in Heaven Today? what makes you decide a song needs a vocal, and how do you decide who will sing it?

Whoever wants to sing will be the person who writes the song (or in the case of the cover version of What are They Doing….it’s whoever wants to do it). Often a song will need “something” to complete it if it sounds lacking. Usually a vocal/vocoder or sample will finish.

You’ve had some guest vocalists on previous releases (Gruff Rhys and Gary Lightbody spring to mind), are there any other artists you’d love to get to sing on one of your songs?

Not that I can think of, really. It just makes it harder to play the song live so we probably shy away from those collaborations. The chipmunks?

As we mentioned What Are They Doing… from the Les Revenants soundtrack earlier, I’d like to know have you noticed your fanbase increase, or more interest in your back catalogue since the program aired?

Yeah, more digidownloads which sounds like people who don’t normally buy our records. Whether that will migrate onto this new album….who knows. Could be a one off perk in interest in Mogwai but I hope it’s permanent.

How did it feel watching the program with your score for the first time?

Odd, like it wasn’t fitting with the images at first but that’s just because it’s hard to be objective if you’re involved in something. I really like it now and i think we did a good job.

Is it correct that you have signed up to do the second series, and the American version?

There’s nothing confirmed with either of those things but we’ll see how it pans out….it makes sense to do something.

How was performing your other soundtrack, Zidane? How did you approach the gig? Was it any different to any other (excluding the obvious timing issues etc)?

It was very carefully rehearsed to make sure that we could make it work. Probably the most rehearsing we’ve done for a show, especially since we hadn’t played those songs in many years.

Is soundtrack work more and more what you would like to concentrate on in future?

If it’s something that we can consistently do, and without the hassle of having to work with people that don’t know what they’re doing then great, we’d love that. We’ve been lucky so far but we’ve also seen a side of that kind of work that is like pulling your own hair out.

If you could pick any film at all, what would be the one you’d most liked to have done the soundtrack to?

Coming back to Rave Tapes, the artwork on the album is extremely striking. Did you give the artist (DLT) a basic outline of what you require or do you give them free reign?

We had quite a good dialogue going with Dave Thomas and we’d give him images from films we liked like Saul Bass’ Phase IV and things like that for him to get ideas. I think he was surprised at our input…..probably horrified actually.

Rave Tapes came in a myriad of different formats including a limited edition box set. Is there a deep belief within the band and the rest of the staff at Rock Action that you should offer listeners as many options as possible and is it important that you keep pushing the vinyl releases?

Yes, you’ve got to offer more and more to this sick and dying industry in order for people to buy your music. We’ve always sold a decent amount of vinyl and I just found out that we were number 1 in the charts last week on vinyl releases and indy record shops, which is really good. I’m glad we are offering something people seem to want on that very lovely format.

Will you be offering other artists a chance to remix tracks off the album again like you did with Hardcore Will Never Die, But You Will (the resulting album being A Wrenched Virile Lore)? I’d love to hear an Andrew Weatherall remix of Remurdered for example.

So would I! But sadly not anything too ambitious this time around.

Finally, you’ve stated in the past that the name Mogwai was never meant to be permanent and you’d just never got around to changing it. Do you wish you had changed it, or are you more comfortable with it now?

I’m used to it more than the others probably because I joined a few years later than them. It’s fine…..it’ll have to do now.

Thank you so much for your time, I’m sure the album is going to be a huge success and I hope the tour also goes well.

Thanks very much, that’s very kind!

All questions by Simon and Matthew Tucker. For more of Simon’s writings for Louder Than War go to his author’s archive. You may also find him on Twitter as @simontucker1979.