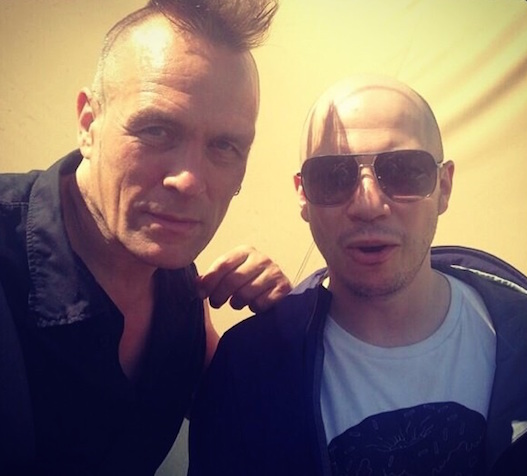 Mogwai are a band at the top of their game.

The sound of independent Scotland are speaking an international language have somehow combined the adventure of prog rock, the no rules of post punk and the dark serrated soul of the so called Goth bands like Pornography era Cure and the stigmata of the criminally underrated Bauhaus and even the industrial perfection of Albini’s Big Black before dropping off to an almost pastoral soundtrack quietness and into something so much their own that no-one else can get near them.

They may hide behind their massive wall of sound, drowning in its staggering and beautiful possibilities but conversely their personalities are indelibly stamped in the music with its swirling and powerful raw power taking you on a trip of its own. I shut my eyes and I’m lost in their perfection.

The brooding atmosphere of the dark skies and the soggy grounds are a perfect backdrop to Mogwai whose mainly instrumental melancholy fills the air with its stunning power and imagination.

Just getting better and better the band incorporate so many sounds and textures into their music that it would take for ever to describe. There is a serious imagination at play here with songs sometimes hooking around a fierce almost Stooges style riff and then descending into a spooked neo silence before exploding with a genuine danger or twisting around some electronic loop.

Mogwai are many things- they are modern classical, they are gothic splendour, they are post punk, post lo fi but ultimately they are themselves and their self effacing nature has left them in that most perfect of places- uncategorizable.

Even if you see them live a lot of times you still can’t call which textures and sounds they will be creating and whether to get into the moshpit for their feral power or raise your hands in the air to their waves of beautiful noise that is a true psychedelic.

Tonight’s set was inspiring and thrilling- a surge of sound that matched anything that nature was trying to throw at us- an electric storm with its own forked lightening of thrilling noise and a festival high point.