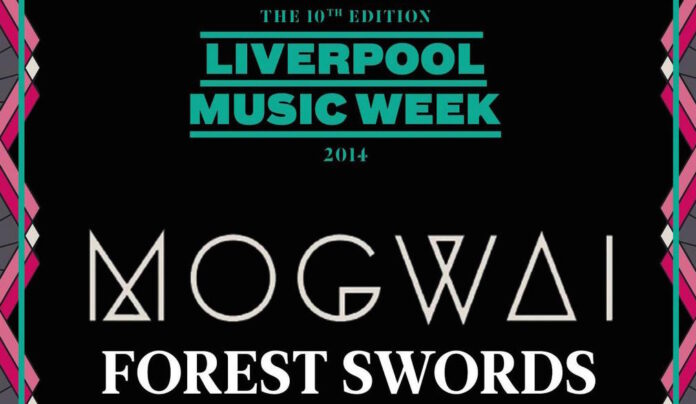 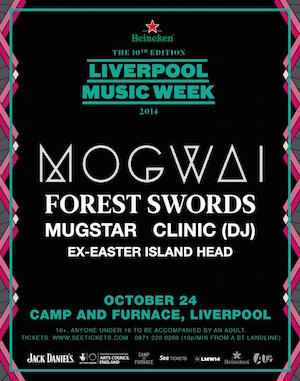 Mogwai stopped off in Liverpool on Friday as they made South to play Bristol’s Simple Things festival on Saturday. They were playing as part part of Liverpool Music Week alongside some other cracking bands; namely Forest Swords, Mugstar and Ex-Easter Island Head – a lineup which Sean Diamond reviews for Louder Than War below.

Camp And Furnace is one hell of a venue; a large former warehouse converted into a  restaurant/events space, walking around the place tonight is akin to stepping  into one of Hunter S. Thompson’s most mental trips! Light shows, live music, food stalls, a vinyl stall, all the stops are being pulled out for this event. Despite the size it’s refreshingly intimate, with none of the corporate trappings of the commercial venues, just a load of music fans drinking, talking about music and all that jazz. How it should be. Maaan…

Local three piece Ex-Easter Island Head are opening the show, standing in a circle at the foot of the stage and encouraging the assembled throng to stand as close as possible. Which we do. Their sound is actually pretty unique; a kind of instrumental acoustic post/prog/ art rock, a riot of xylophones and cacophony of drums, guitars and percussion mallets, a bit like Andy Warhol orchestrating a performance of Tubular Bells in The Factory . It’s a rousing, uplifting and strangely rocking performance; part New York art exhibition, part  musical workshop, all wonderful. A great discovery, I want more!

Behold, the mighty Mugstar! Liverpool’s finest exponents of nerve jangling, ear shredding, time defying psychedelia are upon us, turning in a set of positively Mythical proportions.  Remember that scene in the top children’s adventure film Jason And The Argonauts, when the statue of the titan Talos comes to life, slowly stepping off its pedestal and advancing towards the terrified heroes of the film? That’s a pretty close approximation of the feeling you get when Mugstar start playing, a towering, brutal force of energy that refuses to back down and is seemingly impossible to fight. Best to go with the flow and feel. The band take you on a blistering halfbhour jouney into the void, all sense of time and space is rendered useless, perception has been altered (perhaps forever), what the fuck is forever anyway? Then it’s over. The light show stops, the band leave the stage, you’re brought back down to Earth. Or are you? Devastating, brain eroding, essential stuff, I’m really not exaggerating when I say that Mugstar are one of the ten best live acts in the country, possibly even planet. Suffice to say, you need to see them live at some point in your life. You may even thank me for this advice one day. Who knows? What is advice anyway??

Next up is Forest Swords, the brainchild of Matthew Barnes, a producer from The Wirral. Accompanied by a live band, Branes turns in an extremely bass heavy mash up of dub, electronica, scratchy hip hop and R&B, with a visual backing of screen projections thrown in for good measure. It’s good; his debut album Engravings is worth investigating, the track Thor’s Stone was given the Lee ‘Scratch’ Perry remix treatment last year, but in truth it’s a bit of a comedown coming so soon after Mugstar. I really wanted to love it, there was certainly nothing wrong with the music or the performance, it’s just that I feel it would have been better suited to have come earlier, Mugstar would have been more appropriate co-headliners for Mogwai, that’s all. Something about it just doesn’t seem to gel tonight, I think it’s the timing. Still worth seeing live/ listening to, of course, just not in this context I’m afraid.

Mogwai, then. Hawkwind‘s Silver Machine hovers through the PA, a highly appropriate choice of song given the circumstances. This will be the second time I will have seen ’em, having last borne witness to their post rock meltdown in early 2011, reviewing them for the Oxford entertainment site Daily Info. They always pull in the crowds; for such an uncompromising, sonically unpredictable outfit they seem to attract the masses, all different kinds of people here tonight of different age groups, crowds and creeds, even standing near the front of the stage I’m straining my neck to see anything, the place is packed to the hilt. Arriving to mass applause, a greeting of “Hi, we’re Mogwai from Glasgow, Scotland” and then it’s straight into a double whammy of Heard About You Last Night'(the opening track of new album Rave Tapes) and fans favourite I’m Jim Morrison, I’m Dead.  It’s become de rigeur amongst reviewers, bloggers and music fans to call Mogwai post rock, which they sort of are in a sense, although I’m proposing a change to either Rock Action (also the name of their label) or perhaps even Mogwai Music; do a band of such singular aesthetic quality and powerful clarity of vision really deserve to be lumped in with any kind of scene devised by the press? As the boundaries and foundations are becoming more fractured in these digital times, perhaps it is up to us to create our own definitions and terms for our favourite artists, perhaps this is already happening. Mogwai are a band that make you think, this is just one of many (probably ill conceived) ideas that can spring to mind as you listen to them. It certainly woked out well for Ian Rankin.

The music? Oh yeah, sorry, got sidetracked. The set is mostly comprised of tracks taken from the aforementioned Rave Tapes, a more electronic, less guitar orientated work than some of their earlier releases, but still capable of hitting where it hurts when necessary. Highlights include a sickeningly apocalyptic Deesh and a towering The Lord Is Out Of Control, an epic piece of vocodered majesty. Closing with Mogwai Fear Satan you’re left wondering if the Dark Lord himself  would feel the same about the music of Mogwai, at times  overwhelmingly intense enough to make a gaggle of Harpies fly away in sheer terror. Still the Gremlins of rock ‘n’ roll’s underworld, and would you want it any other way? I certainly wouldn’t. That would surley be a cause for concern.