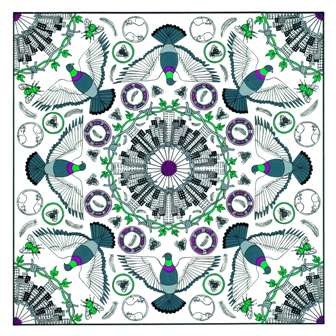 Modern Nature: How To Live

“But the wind does not stop for my thoughts. It whips across the flooded gravel pits drumming up waves on their waters that glint hard and metallic in the night, over the shingle, rustling the dead gorse and skeletal bugloss, running in rivulets through the parched grass – while I sit here in the dark holding a candle that throws my divided shadow across the room and gathers my thoughts to the flame like moths.” Derek Jarman, Modern Nature

Urban versus rural. The expansive hills versus the high-rises. Within art there has been a lot of division between that that has been inspired by the city and that which has been created thanks to the influence of the countryside. But what if the two were to blend together? It was this very idea that inspired Jack Cooper to call his new band Modern Nature. On his way to visit the home of Derek Jarman, Cooper was struck by what he calls a “weird mix of urban and rural”. Industrial versus agricultural. Gathering a group of like-minded individuals together (Will Young, Rupert Gillett, Aaron Nevue, Jeff Tobias) Modern Nature was born and with Cooper and Young approaching the album more like a film or a play a natural narrative for the album was formed making How To Live a cyclical and heavily thematic release.

How To Live is a balancing act performed without a safety net. On the one hand you had a deep vein of melancholy and sadness yet on the other you have a much welcome dose of optimism and of hope. From start to finish the band pick you up and place you down exactly where they and you need to be. You wouldn’t have known that you needed the song Criminals in your life but once you’ve heard it you will understand. Criminals is plaintive and fragile yet incredibly moving with the strings of Rupert Gillett writing its own undercurrent of beauty whilst Young’s synth circles around and around dancing with the guitar. Music as communion.

This display of intelligence and heart carries on throughout How To Live. Opener Bloom sets a reflective tone imagining us pulling out of a pollution filled train station heading out to the coast. Maybe we’re leaving a lover or leaving ourselves behind. That piece of the narrative is up to you to draw. Don’t linger though as we switch into the chug chug motorik rhythm of Footsteps which is where Jeff Tobias first announces himself on the sax. Tobias dances in and around the main body of the song freeing himself to go where his instincts take him without losing the main idea of song-as-journey…it is the sound of rural madness smashing with the chaos of nature.

It is only when you get into the middle of the album do you realise what a grip it has on you. The half-whispered vocals and the subtle instrumentation and production make How To Live one of the most meditative albums in a long time and that includes the more chaotic elements as for every disorientating Nightmares there’s the tranquility of Oracle but still…but still. You struggle to define and to express what is happening as you listen because there are no boxes you can slap on to each song. They all have a mixed personality which I suppose means that Cooper has succeed in his original idea.

How To Live is a lovely debut album that contains an abundance of elegance and charm. Due to the way it has been created it allows for much audience interpretation which is a key element to what will make this album resonate with many. Modern Nature have made a rather gorgeous and subtle album that acts like a tonic for toxic times. The dissonance of city sounds married to the breathier tones of the countryside. A marriage made in heaven.