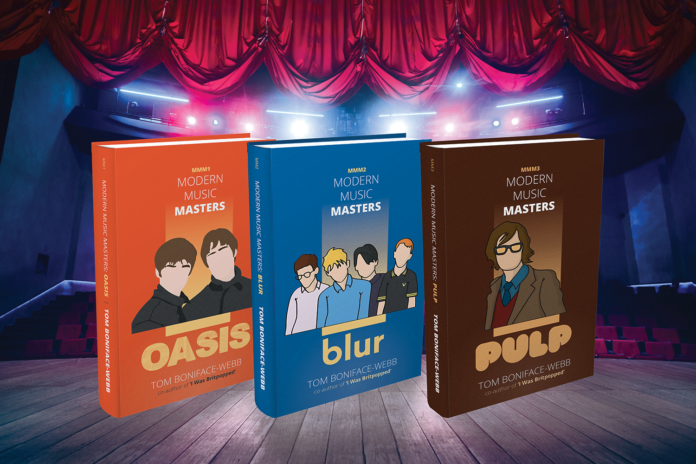 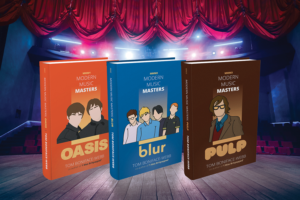 Modern Life really is Rubbish at the moment and the only ‘Parklife’ we have been getting recently is our daily one hour of exercise. However, this is all about the change with the release of Modern Music Masters: The Britpop Trilogy. New Zealand based author Tom Boniface-Webb has released three short books covering Pulp, Oasis and Blur getting into the information fans really want to know.

Have you ever wondered what was going on the in the country and the world at the time that your favourite Britpop band formed and were releasing records? How did this impact on their success? And what was one of the biggest reasons Oasis’ third album Be Here Now didn’t succeed as everyone expected? Well, this is the kind of information to expect from this trilogy.

Written back in the beginning of lock down in March 2020 and then released late last year,  Boniface-Webb describes them as the series of books he “would want to read if he was discovering music for the first time as a teenager, or looking for a short, accessible new angle into the bands and artists that [he] loved”. The trilogy acts as an extended bio for the beloved Britpop bands, putting their history into the social context of that time.

Here is a small snippet of ‘Modern Music Masters: Blur’:

“As is the case with so many British stories, the narrative of Blur’s is one intrinsically tied to the British class system. To some, you say the name Blur and an image is conjured of cheeky cockney chappies sporting Adidas Gazelles, flanked by Phil Daniels singing ‘Parklife’. To others they are the Middle England Champagne socialists, supporting Tony Blair, and propping up the bar at Soho House with Keith Allen, trading on fabricated working-class roots, mincing about in music videos made by Damian Hirst, and throwing copies of Balzac at the Gallagher brothers. Both of these willfully constructed images are true, and both are fake”

The band’s history is told through a comprehensive list of the artist’s officially released albums and singles in a digestible way that appeals to fans and newcomers. There is no pretense, no arrogance and no snobbery from Boniface-Webb. The books manage to get into the nitty-gritty without overwhelming me which, I find, can be the case with some music books. We are gifted with track listings, producers, where and when records were recorded and the chart position they reached. Each release is also put in the context of the top 10 on the day they charted, so, what songs were at numbers 3-10 the week that Oasis and Blur battled it out for the top spots in August 95? Placing each artist in their cultural context of what was popular at the time, it acts as a trip down memory lane to remind us what we were (and weren’t!) listening to back in the day.

The books are accessible, easy to pick up and put down, so there simply isn’t the space for Boniface-Webb go into the where and when the bassist from Suede was born, where he went to school, and who his more famous brother is (answer: Richard Osman, the comedian and writer).

“There are few [music books] that have such a focus on the charts as well,” states Boniface-Webb. “Each release is put alongside what else was in the top 10 that week. As well as a historical document of the time, these books are a total nostalgia fest for those there the first time around”

There are also plans to cover The Libertines, Arctic Monkeys, Kate Bush, Badly Drawn Boy, Paul Weller and many, many more.

All words by Jasmine Hodge. More writing by Jasmine can be found at her author’s archive. Jasmine is also on twitter as @ObviouslyItsJaz