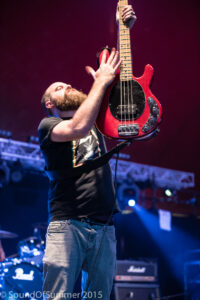 Modern Life Is War emerged from Marshalltown, Iowa to become one of the most influential hardcore punk bands in history.  Their intense aggressive and incendiary live performances combined with hard hitting lyrics were credited with breathing life into a dying hardcore scene.  After releasing three albums Modern Life Is War were on the cusp of greatness when the pressure of making their way in a rough music scene became too much.  The band split in 2008 but reformed in 2012.  Alan Ewart caught up with them at last weekends Reading Festival.

Modern Life Is War are, to me, what hardcore punk is all about.  They are loud, aggressive, hard hitting and energetic, their 2005 album “Witness” is a masterpiece and one of the most important hardcore albums ever released.  When it was announced that Modern Life Is War were to play at this years Reading and Leeds festivals they were one of the first names added to my “do not miss” list.  They shot to the top of that list when I found out that they were to play “Witness” in full.

I had not managed to see Modern Life Is War live first time around but I sure as hell wasn’t going to miss them this time.  As you can imagine I leapt at the opportunity to grab some face time with the band as well.  I confess that with their wild, aggressive live performances the stuff of legend I wasn’t too sure what to expect when I met them.  I wasn’t really expecting what I did find.  The guys were relaxed, open, friendly and above all they were both modest and humble.

I was intrigued by what had brought Modern Life Is War back to the music business given that they split as a result of the pressures of trying to make a decent living in a tough business.  Jeff explained that the mind set was now totally different. 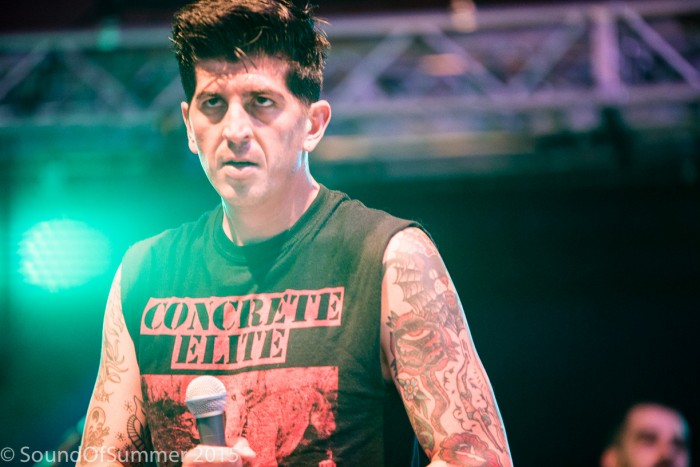 “We were able to come back because we were able to approach the business on our own terms.  We are only playing around 25 shows a year now.  Some are small venues and some are big festivals.  We are able to spend most of our time at home, we all have day jobs so we don’t rely on income from the band to make a living.  We are happy if we break even and that means we are able to treat our music as a passion again.  It’s a release it’s fun and we like it a lot more than trying to make a career out of it.”

Jeff went on to explain that very single show is special to them.  They feel that they have the freedom to make every moment count onstage and they have having a lot of fun doing it.  Chris added that “the excitement and freshness” was back because they are not on the road for 10-months of the year.

We turned to talking about “Fever Hunting” the bands post reunion album, released in 2013.  The album lays bare the tough times the guys went through immediately before and during their hiatus.  I wanted to know how they had managed to bring 5-years of experiences together to make an album that holds together so well. 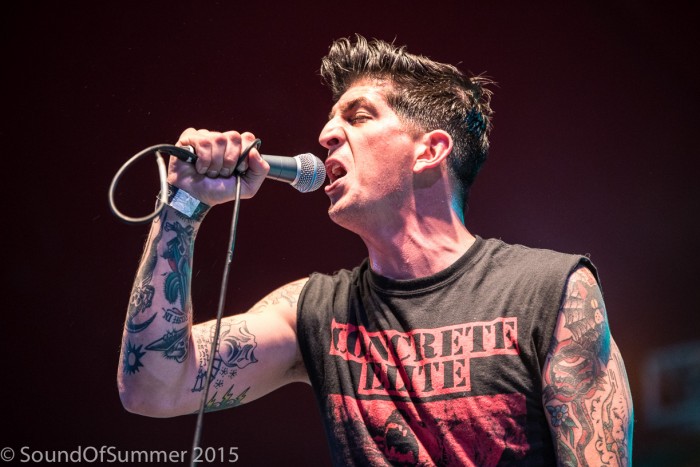 Jeff says that “actually it was pretty easy.  I knew exactly what I wanted to say, I was like a loaded gun, I didn’t feel like the odds were against me.  I knew I had all the ammunition I needed to write and the ideas had been floating around for a while.”

We turned to why Modern Life Is War had decided to reform.  Chris explained that he had quit the band just before Midnight In America had been released because there were other things he wanted to accomplish and because he needed to “change his life.”  He continued by saying that “once I had done that I felt like there was a hole in my life.  I was living in the suburbs of Phoenix and I didn’t hang out with musicians, I had no artistic outlet.”

Chris called Jeff and asked if he would be interested in getting the band back together.  Jeff was happy to do so provided they could write new material that everyone was happy with.  “I then called everyone else at like 3. am and everyone was excited to do so I called Jeff back and gave him the news.  We decided there was no time like the present and decided to get on it right away.”

I asked how difficult is had been to split given that Modern Life Is War were on the crest of a wave and credited with breathing life back into hardcore.  Both Jeff and Chris were adamant that they didn’t feel that way at the time.  They felt that “Witness” was slow to take off and it was only over time that it became an influential album.  Whilst they always believed in what they did the guys never felt that Modern Life Is War were “the cool band of the moment.”

Jeff goes on to say that while it is nice to be seen as an influential hardcore band what was important to them is “the music we love and our friendships within the band.   I don’t want to be up my own ass about it.”

Jeff is enjoying the fact that hardcore is undergoing something of a renaissance but says that he doesn’t try to keep up with trends.  He is a music person and likes what he likes but admits that he is excited by the fact that the genre is getting more exposure because he thinks that the bands have something important to say.  He acknowledges that sometimes hardcore bands are devoid of message heart or meaning and he doesn’t recognise those bands.

Chris added that those bands who get signed by a decent label are much better looked after than they were in the past.  “We spent half our time booking our own shows on the back of a 7″ that we released.  We travelled in a rusted out cargo van, if you were a hardcore band there was no ‘industry’ we had to do it all ourselves.”

I asked the guys if they would get a chance to check out any of the bands playing at the twin festivals.  Jeff revealed that they had been checking out bands on the line-up and had really liked Youth Man and as a result had asked them to support them at their show in Glasgow the previous evening.  They were also really keen to see hip-hop act Run The Jewels who they see as a really important band right now as their material reflects the political situation in the USA. 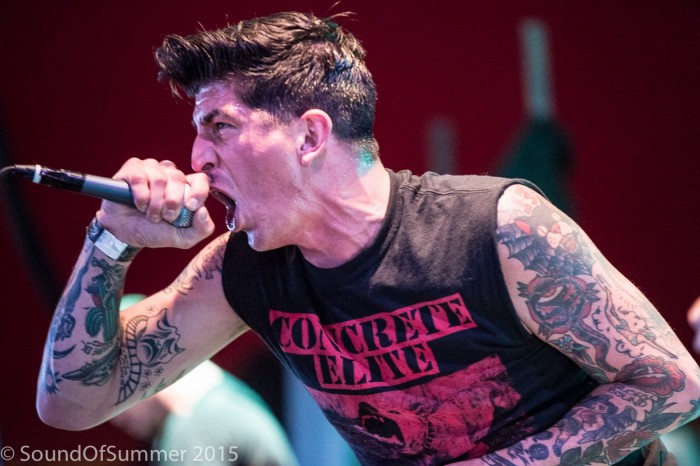 Shortly after my interview Modern Life Is War took to the stage in “The Pit.”  Their performance was everything I had hoped it would be.  This is a band who put their all into performing, they give everything they have got for every second they are onstage.  From first note to last you can feel the energy, the atmosphere is electric and both Chris and especially Jeff are transformed from mild mannered, personable guys into sweating, seething balls of energy.

Jeff is red faced, his eyes and the veins in his neck bulging as he snarls and spits his lyrics.  He sets the tone for everyone on stage and the crowd respond in kind.  The action in the mosh pit is every bit as brutal as the action on stage.  Modern Life Is war are a tour-de-force.  They represent all that is good about hardcore and they take the crowd with them on every song as they work their way through “Witness”.

Through it all though you know that Jeff is 100% genuine when he takes a short break, looks the crowd in the eye and says “Thank You so fucking much for coming out to see Modern Life Is War.  We know there are numerous great bands that you could be watching right now.  We really appreciate you coming to spend some of your time with us”.

You may appreciate the support guys, but I know that everyone in the crowd will have cherished every moment of the time they spent with you.  Come back soon.

Modern Life Is War are on the internet at modernlifeiswarofficial.com.  They are on Facebook and they tweet as @MLIWofficial.