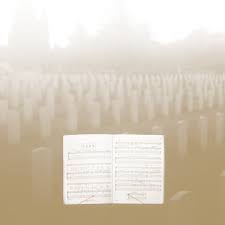 Occupying the space between The Cure’s goth peculiarities and The Smiths’ dandy Lancastrian tendencies is hardly a new trick. Thankfully, elusive Canadian band Mode Moderne have enough musical hooks and lyrical originality to stand alone rather than merely joining the pantheon of bands for whom imitation is the limit of their capabilities.

Lead man Phillip Intilé  is demonstrative, vocally eclectic and endearing in his delivery; the guitar parts of Clint Lofkrantz are expertly designed; Sean Gilhooly dashes between subtle basslines and high-end lead parts. And then there is the vital Rebecca Gray, her keys colouring everything. It remains a fact that bands with a girl on keyboards are infinitely better than bands that do not.

What is incredible about their new record – Occult Delight – and the sound of the North American underground right now, is that it is distinctly European in texture. There is a spate of new bands making music similar to what toiled in the murky shadows of the late ’70s as the welfare state crumbled and neo-liberalism all but put an end to post-war hope of a better world. That, of course, was briefly interrupted by the heady optimism and misplaced energy and glam of Britpop culture, but if music reflects the times we live in, then our friends across the Atlantic are showing the way right now.

Maybe it’s to do with austerity and political alienation in the United States. Maybe it’s just an imagined community of bands with similar tastes in America’s vast landmass. Who knows? However, Merchandise from Florida sound as angry and disaffected as those who grew up as children of Thatcher and Wild Nothing from Virginia and Bedfellows from Brooklyn display synth-pop tendencies that are as fresh and innovative as the music that added a shade of colour to the greyness of the early ’80s.

Mode Moderne occupy similar territory, marrying weirdo pop with the style of Britain’s ’50s Edwardian revival. Strangle the Shadows is nonchalant and evasive, its guitar lines and thrashed rhythm parts merging with a deliberately simplistic beat. It’s almost like like an informal introduction to the record and a feeling evolves that there is something more to be unleashed. What it is, you have no idea, but you’re seduced and almost hypnotised by the sound, which is at once strangely familiar yet mildly unsettling.

Baby Bunny has the jangle-pop of Marr and the sardonic wit of Morrissey while Thieving Baby’s Breath bridges the gap between Joy Division and The Killers – before they went all horribly Springsteen on us. She Untamed also owes a debt to Macclesfield and Salford while Come Sunrise has a touch of Ennio Morricone about it.

Unburden Yourself is defiantly brilliant – dark, yet gloriously poppy. It deserves to be the modern equivalent of The Cure’s Boys Don’t Cry, a song to usher those lonely souls to the indie dancefloor immediately on its dispatch by the DJ. “I don’t mind your indifference/ In fact I want a bit more physical distance,” is a line that has the potential launch a thousand bungling romances.

This album will speak to forlorn youth but will also reawaken the outsider in the older listener and repatriate them to their awkward teenage years – before revealing how gloriously underrated it all was. Mode Moderne aren’t a revival act, there influences are clear, but what is old becomes new when it lies dormant for so long. They’ve dug up a body of work and utilised it for their own means. The results are as fresh as you’ll find in guitar music.