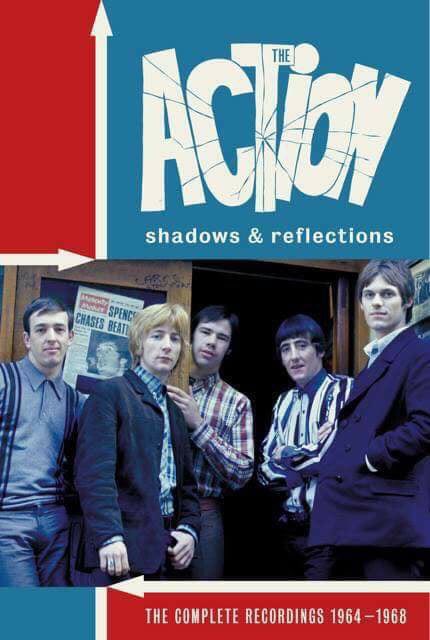 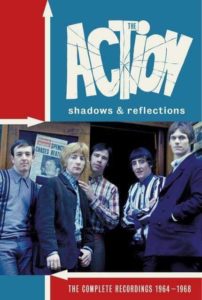 The 1960’s saw the birth of many bands that have had their career covered with a breadth and depth of material that has been readily to hand to their fans. One band and it’s fans that have never had that luxury is The Action. Produced by George Martin, in-between his time producing a little band from Liverpool called The Beatles, The Action had it all; the ultimate sharp mod look, the harmonies to beat anything by The Beatles and Beach Boys combined with the songs to boot. However, their original written material under the guise Rolled Gold was only released 30 odd years after it was recorded and their soul covers material that they recorded with George Martin has never been given the sort of release it deserved. This is about to all change with Cherry Red’s stunning 4 CD new album release The Complete Recordings released September 2018. Accompanying this release is a vinyl re-release of the bands Rolled Gold recordings released via Guerssen records on 21st June 2018 plus a DVD of the reformed Action playing at the 100 Club in London released via the Action Facebook group, all of which have the seal of approval from the bands drummer Roger Powell. Matt Mead investigates all the above mixed in with an interview with Paul Weller, who talks about one of his favourite bands. The Action!

One of my personal favourite ever bands are The Action. There’s something magical about the band in my humble opinion. There is very little audio material and TV/live footage of the band, yet a book In The Lap Of The Mods that was released a couple of years ago has all fans who were lucky enough to see them praising the band uncontrollably plus it has the band members considering what could have been. The harmonies, the mod look and the songs, the band had everything. All that was missing was that luck that any band needs to be able to make and break a band. They even had the golden producer of the time George Martin but alas sadly their luck was out.

Labelled as a Mod band, the band are so much more than just an Mod band. Full of Soul, Sweat and years of practice, the band came into light covering Motown/soul covers in the mid 60’s after a stint backing Pop songstress Sandra Barry. The Action’s live gigs are the stuff of legend to their fans, Phil Collins included who used to watch them religiously as a young Mod at the Marquee club London. Rhythm guitarist Alan ‘Bam’ King, lead guitarist Pete Watson and lead singer Reggie King could harmonise like the best and they were the best.

Since the 60’s there has been a plethora of new fans that have fully embraced The Action, who are finally going to see the band get a long overdue mass release from the bands personal archive plus through excellent work of Cherry Red and Guerssen Records. Reaching deep down in the archives are Cherry Red, unearthing virtually everything the band ever recorded in the studio, including never heard before studio outtakes, alternative mixes, plus new tapes that show a cleaner crisper era defining Rolled Gold material.

What has transpired over the years are mixes from the same old tapes being released via various compilations, but what Cherry Red the collection has unearthed are the original 1960 stereo mixes, which has a different earthy bold, brass, with knobs on sound to the singles that have been released under the guise of the Ultimate Action/Action Packed. There are also never before heard out takes and alternate mixes. To all Action fans it was thought that everything had been heard. Not so. The 4 CD set really is a labour of love, one that strikes to the heart strings of all Action fans, seeing that there is yet more treasures that have been unearthed from the vaults. The 4 CD set also includes 16,000 words of sleeve-notes by David Wells and a 36-page booklet within a handsome 4-CD digibook. There is also an album entitled The New Action which features the freshly discovered stereo multi-tracks. This is the Action like you’ve never heard them before! Everything has suitably remastered by Alec Palao.

The Rolled Gold material that is also featured in the 4 CD set and the vinyl release from Guerssen records is stuff of legend. Released after gathering dust for many years. It displays a band experimenting with new, original material, rather their soul covers of the mid 60’s. Why the Rolled Gold material never got a full proper release is really baffling considering some of the similar, IMO, weaker material that saw a proper release at the same time by other bands of the period.

Originally recorded as a set of demos with the intention of obtaining an album deal which inexplicably never materialized, Rolled Gold is a collection of brilliant songs, melancholic yet powerful. The Action’s classic line-up of Reg King, Alan ‘Bam’ King, Michael Evans and Roger Powell (Pete Watson had left the band not wanting dabble in the new experimental side of the band’s music and shall we say flavours of the time) is augmented with the inclusion of new members Martin Stone on guitar and Ian Whiteman on flute/organ. All of them are playing their hearts out; superb harmonies, great guitar work and clever arrangements which show the influence of bands like The Byrds and the psychedelic sounds that were coming from the West Coast and UK as well as jazz giants like John Coltrane.

The Action pictured live at The Marquee club, London, around the time of the Rolled Gold recordings 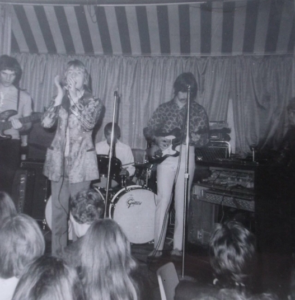 Digitally remastered from the master tapes with a  bookled with with photos and detailed liner notes by Jason Barnard. The Guerssen release I personally think finally closes this chapter on the band. The previous release by Dig The Fuzz, which was none the less fascinating to listen to, didn’t have a polished sound that this release has. Bass heavy, slightly tin sounding and scratchy in places, the previous releases have been topped by this lovingly crafted masterpiece. You can tell by listening to the new release there has been some time and effort spent on getting the best sound from the tapes, bringing a new refreshing life the songs.

The DVD release has been recently unearthed from the personal archive of Action drummer Roger Powell with the help of The Action/Mighty Baby super fan Tim Doyle, who also runs the best Action fan group on Facebook, which is packed with rare Action memorabilia. Back to the DVD and what you have is the reformed Action sound checking and playing live at London’s famous 100 club, back in the year 2000 when the full original line up reformed for a set of Mod gigs, under Rob Bailey’s excellent New Untouchables organisation. From pressing play you feel yourself transported to the venue, the footage is in excellent condition considering the years it has been in storage, with the band striking up all of their well-known numbers, the band after not playing together for 30 years put on a decent show. The added celeb in the set it drumming powerhouse Phil Collins, who plays the whole set with his fav ever band. This may not be The Action is their 1960’s glory, but what is overly evident is the bands love for one another, the music they are playing, a times the whole band sing along to some of the songs whilst Reg, Alan and Pete take on the vocals. To say the DVD is a stocking filler and is doing the good work Roger and Tim have done. This is an essential Action release and fits in overly well with their back catalogue.

Interview with Paul Weller, that first appeared on The Action Twitter page:

LTW: First things first, when did you first hear about The Action?

PW: I first heard The Action on a great EMI compilation called “My Generation”. Their version of “Baby You’ve Got It” was on it. I’d heard and read about them in my thirst for anything mod! This was ’75/’76 I think. I also bought that record for the sleeve – a great illustration of two rockers and a group of mods taking the piss out of them on a seafront. When I started playing gigs in London I met a few older cats who would tell me who to listen to, like The Creation, Birds and of course, The Action. I managed to buy all their Parlophone singles through my mate Ady Croasdell. They were expensive even back in the early 80’s!

You were involved with the Ultimate Action release in the early 80’s, adding your comments to the release, therefore opening new avenues to your fans and allowing the Action to have a new hoard of fans. How did you get involved in this release?

Someone from Edsel got in touch with me about doing the sleeve notes for the Action compilation that was coming out. I’d heard all the A/B sides but there were a few unreleased tracks they had found. It was great to see photos of the group too – they were very difficult to find.

There’s a pic of you with Roger and Alan around the time when The Action reformed for their New Untouchables gigs. Did you meet all the band around this time?

I met all of them at a screening for the documentary that Phil Collins produced, with the live footage etc. I got all of them to sign my ticket. I was totally made up to get that!

Were The Action as big an influence on you as say The Small Faces and The Who?

I can’t say that they were a major influence on me (unlike the Small Faces for example) but I loved their playing and Reg’s vocal. My favourite track is probably their version of “Since I Lost My Baby”. I love that! It’s a shame they never got that hit back in the day but I’m so glad there’s still people talking and writing about them, still digging them after all these years. New people discovering them too.

Finally, you have a massive record collection. What Action rarities do you own?

I’ve got the famous French picture sleeve EP – it took me over twenty years to find one!

ACTION SPEAKS LOUDER THAN…
15. ONLY DREAMING
16. DUSTBIN FULL OF RUBBISH
17. AN UNDERSTANDING LOVE
18. MY FAVOURITE DAY
19. A SAYING FOR TODAY

You can buy the 4CD set from Cherry Red website. The reissue of Rolled Gold via Guerssen official Website.The Facebook group releasing the 100 Club DVD of The Action’s last ever filmed performance is here. A rather superb book all about The Action can also be purchased here. If you would like keep up to date with The Action the best places are either the Action Twitter page and Facebook group.