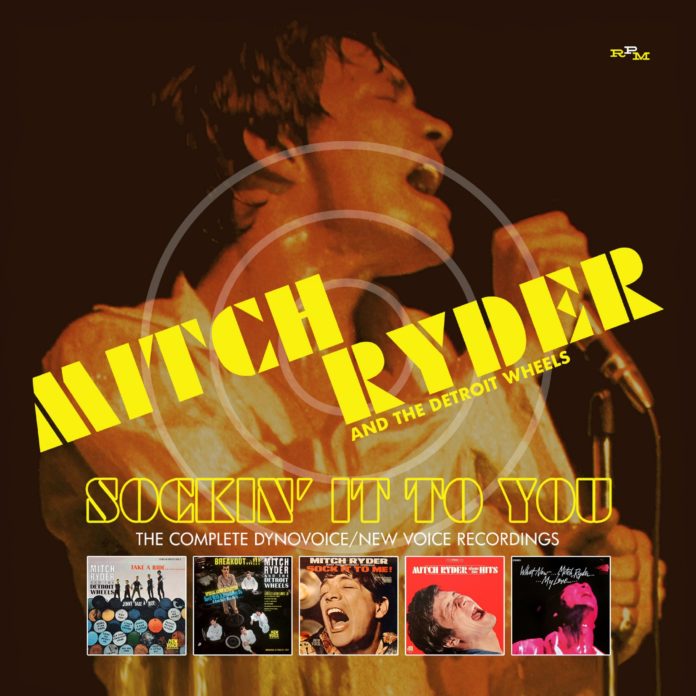 Mitch Ryder & The Detroit Wheels – Sockin’ It To You 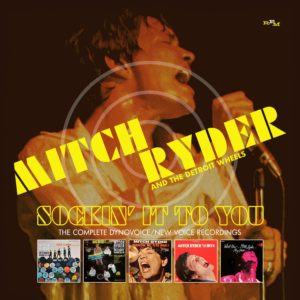 In the early 1960s Detroit was already pretty much set in people’s minds as the soul music capital of the world. This was largely thanks to Motown Records’ stunning run of successes. A young man called William Sherille Levise Jr was growing up in nearby Hamtramck, drinking it all in. He was itching to become a part of the city’s music scene as soon as he could. After singing backing vocals for a few bands he joined an outfit called Tempest, but he made he made his recording debut solo in 1962 with the That’s The Way It’s Gonna Be single, released on the small Carrie label.

He was now known as Billy Lee and after singing with an assortment of local acts, he joined up with a hot new band called the Rivieras. They included in their number young drum sensation John Badanjek and guitarist Jim McCarty, who would both do much to make the band stand out with their innovations and energy.

Blessed with the great soulful voice of their new frontmen and a raw but musical vim, the group began to make a mark locally. By 1964 their supercharged stage show in the support of British Invasion acts and at teen dances meant they got to cut a single You Know, made with the financial help of Mitch’s dad (he had also footed the bill for Mitch’s solo single). This gained them the interest of big name producer Bob Crewe, who had recently overseen the massive success of the Four Seasons. He selected a new name for the band and singer, noting that there was already an outfit called the Rivieras making waves. Mitch Ryder And The Detroit Wheels were born.

The first three albums here, which make up a disc and half of this new collection, are non-stop tough r&b action and still super to listen to all these years on. They fairly crackly with exuberant brio, but it is all backed up by solid craft and undiluted talent too. The debut album Take A Ride set out their stall in a fiery and addictive fashion. They didn’t write much of their own material – lots of soul covers, with Crewe penning most of the other material with a variety of partners. Ryder co-authored closing track Baby Jane (Mo, Mo Jane) with a busy rhythm, a bit of punk sneer in the vocals and some fine and freaky guitar. But where he and the Wheels really made their mark was in the total conviction, passion and invention of their performances.

This LP included their breakthrough hit Jenny Take A Ride, a really insistent and groovy dance number that set the band on course for success after their first recording I Need Help stiffed. Other highlights of Take A Ride included another great dance tune in Come See About Me and the brilliant Sticks And Stones. The latter, a Henry Porter and Titus Turner blues song, is one Ryder makes his own, imbuing the song with a casual but deadly attitude. It’s no surprise that this nonchalant show of rage helped the band find fans in the likes of Iggy Pop and a host of garage bands all over the US. Overall Take A Ride hits all the right notes one could ever wish for from a souped-up 60s r&B LP.

It was only a mere five months later that fab follow up Breakout…!!! arrived in August 1966. The LP (eventually) included three hit singles, including the medley Devil With The Blue Dress On/Good Golly Miss Molly, which was hastily appended to newly pressed issues of the album to cash in on it reaching number 4 in the US charts. A version of the standard Little Latin Lupe Lu also made the Top Twenty, though the title track struggled to make an impact as a single, eventually reaching a high of 62.

Nevertheless and despite a line-up reshuffle, Mitch and the Wheels came up with the goods again on this record. Wilson Pickett’s In The Midnight Hour gets an up-tempo going over and Oo Poo Pah Doo shows the band could easily rock up a storm. Breakout itself left me scratching my head as to how it wasn’t a bigger hit, with stinging guitar expertly applied upon a certainty to fill any dancefloor and Any Day Now showed Mitch could handle slower material also with aplomb. A top second album by anyone’s standards.

Keeping up an enviable work ethic that saw them released three albums and eight singles in just over a year (and that’s not taking into account live dates), Sock It To Me! arrived in the spring of 1967 and is the first part of disc two here. The title track returned the band to the Top 10 despite a number of stations refusing to play it due to the suggestive nature of the lyric. All the songs, bar Bacharach and David’s Walk On By, came from within the Ryder and the Detroit Wheels camp, but there was no drop off in terms of quality. They just carried on doing what they did in a very high quality way indeed.

After the cool r&b build and guitar mayhem that enliven the excellent title track, I Can’t Hide has hints of gospel/blues in the vocals, something that was always at the base of soul music. Takin’ All You Can Get shows they had their ears to the ground, mixing in a few gentle psych moves of fuzz and organ in and Shakedown does a similar trick in crossing the new sound with authentic soul. The sunny pure pop of Wild Child brings Sock It To Me! to an end, another hugely satisfying collection. Also on this disc the last Mitch Ryder And The Detroit Wheels single of their original incarnation is included, Too Many Fishes In The Sea – Three Little Fishes. A return to the medley format of the Devil single put them back in the charts, but it wasn’t enough to arrest what would come next….

So after Sock It To Me!/Too Many Fishes Crewe unwisely decided to meddle with the magic formula, dispensing with the Detroit Wheels and attempting to reposition Ryder as a MOR solo artist. A foolish move, as the band and singer were a perfect fit, their explosive musical flair providing the ideal backdrop for Ryder’s non-stop soul vision. There seems to have been a concerted effort from the producer to even push Mitch into an all-round family entertainer role, something which he never really was at ease with. He was, after all, a true soul singer. Watch this piece of film of him duetting with Otis Redding if you are unsure…

The resulting album What Now My Love, which makes up the first half of disc three in this set, has a bit of the uneasy feeling of a half-measure. The first five tracks are big-production, theatrical MOR Pop, with the second five more in the mode of what brought Ryder to the dance. Mitch is still in fine voice of course, but some of the material is far away from the rootsy rawness that made his early records so compelling. Even so he does a convincing job on the dramatic Jacques Brel song If You Go Away (Ne Me Quitte Pas) and the slight psych pop/bubblegum leanings of Let It Be Me.

He understandably fares better on the second half of the LP’s more upbeat songs, but even here the lack of the Detroit Wheels is felt. I did enjoy the female vocals, they feature well jousting with Mitch on Sally Go ‘Round The Roses, that works very well and That’s It I Quit, I’m Movin’ On has a solid soulful drive. Overall this odd mix appealed to few and the album disappeared without trace.

After parting with Ryder Bob Crewe issued Mitch Ryder Sings The Hits (featured as the second part of disc two here), where he overdubbed and generally toned down the Detroit Wheels’ essential rawness. The LP versions are pretty good, but don’t add anything much to the previous takes and the sonic messing around logically means they miss much of the dynamism of the Wheels. This, along with What Now My Love album, brings home the importance of them to Mitch’s upward career arc. Basically this LP was a money making exercise to squeeze the last drops out of the material, but on the positive side it is never less than enjoyable, if a bit of a let down after the vibrant appeal of the first three LPs. There are two post-Detroit Wheels cuts added and they’re both decent, with Ruby Baby And Peaches sporting a Little Richard-style mayhem and the smooth dance number You Are My Sunshine, which was a minor hit as a single.

Finally, we come to the last eight numbers of the set, which rounds up the single tracks that didn’t feature on any albums. This includes Joy, just right for a northern soul disco and the slinky verve of Ring Your Bell. As ever, these are energy-filled performances that don’t muck about in the course of guaranteeing the listener a real good time, with only The Lights Of The Night being more sedate. A great way to sign off what is an excellent boxset.

It’s a real shame that Mitch Ryder and the Detroit Wheels remained an unknown quantity on this side of the Atlantic. We definitely missed out. They set the template that so many bands have used ever since, the kind of manic action fusing garage soul with a no-holds barred punk attitude that resulted in maximum fun. It’s good to report that Mitch and the mainstays of the Detroit Wheels still play and record and no doubt go down a storm. This collection just made me feel good and not able to sit still – it has stood the test of time so well. Mitch Ryder And The Detroit Wheels during the course of their three albums featured here produced magic, pure and simple. The other material is a lot of fun too, but that trio of albums absolutely burn. You really would do well to seek this set out.