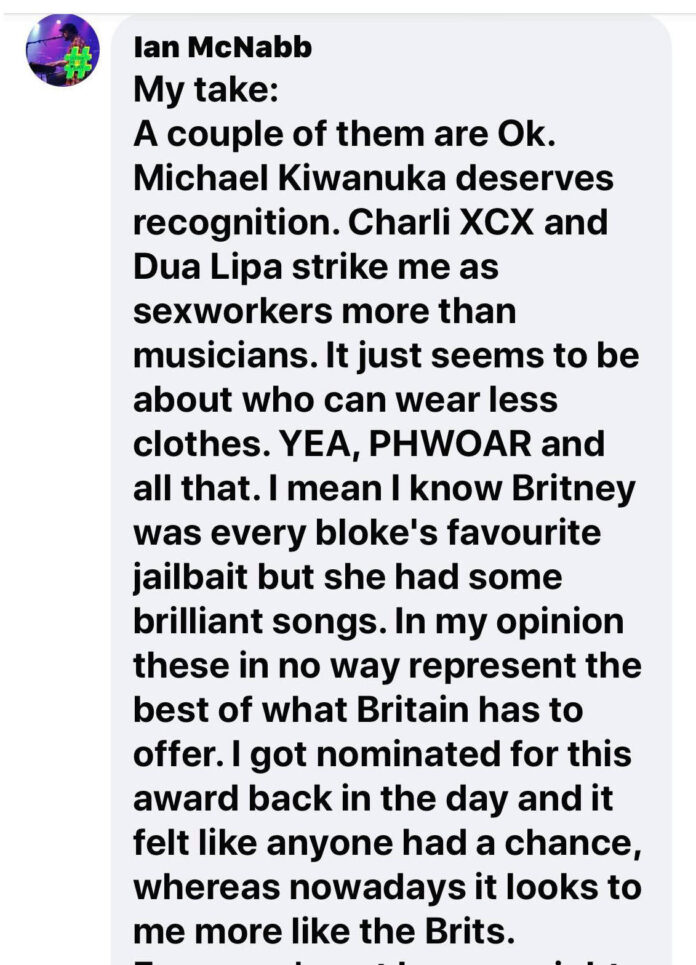 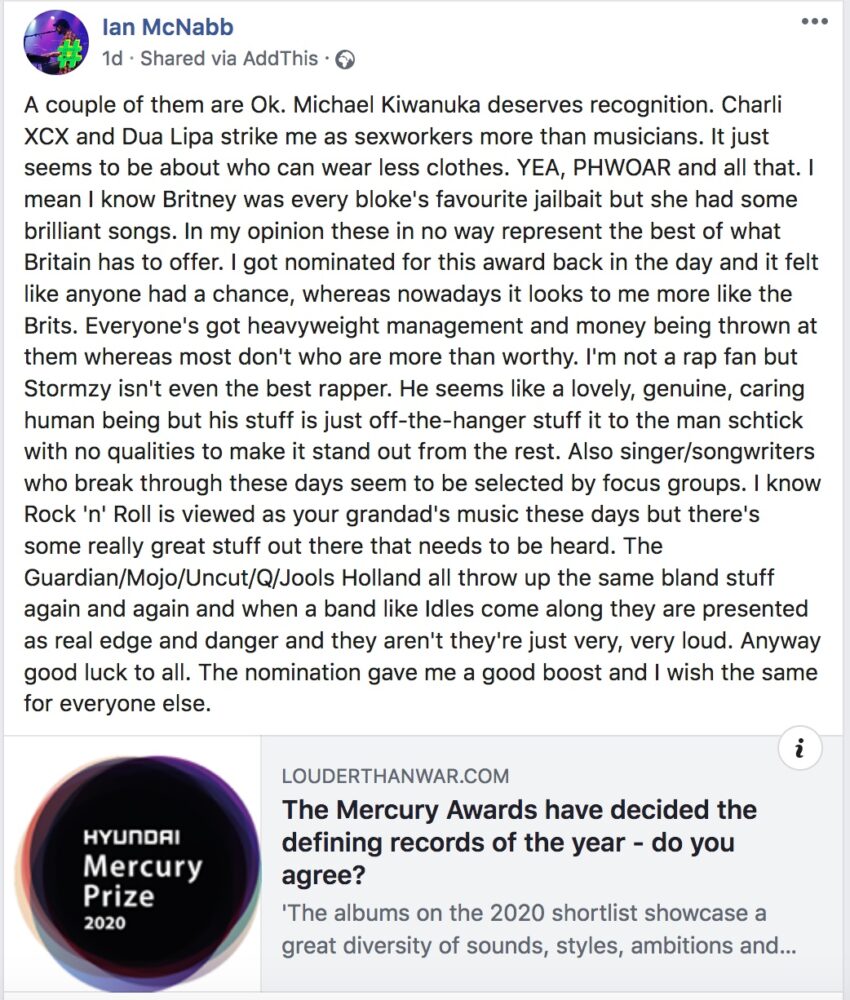 Oh dear, another eighties male indie star has decided to share his outdated and insulting opinions.

This time it is former Icicle Works frontman Ian McNabb in a post on the Mercury prize shortlist announcement saying two of the nominee’s Dua Lipa and Charli XCX “strike me as sexworkers more than musicians.”

It’s hard to know where to start with that insult, but the first thing to note is that women in pop, and elsewhere, can wear whatever the hell they like. It is not the job of an increasingly irrelevant bloke to offer a view on their attire, and not one that is mind-blowingly outdated, as well as frankly just disgusting.

My best mate loves pop acts so I have seen both double Grammy winner Dua Lipa and Charli XCX recently, as well as Mabel, Zara Larsson, Anne-Marie, Sigrid and Shura. What unites that diverse group of talented women is they have great voices, write their own tunes and perform with a live band.  Just like all the other Mercury nominees, but because Dua and Charli are perceived as pop acts then it seems it is open season to denigrate them.

Oh, and they pack out big venues with people gleefully singing along to their songs. and not one person there gives a toss what they are wearing.

These women are role models for a new generation of music fans offering pithy pop songs that tackle a whole range of issues that strike a chord with their audiences.  It was incredibly touching to hear Anne-Marie talk about her own insecurities as a woman and a pop act that have informed her songs, and which certainly struck a chord with her fans.

We should be celebrating the fact that these acts are pulling younger fans away from their devices and out into live venues.

There’s also a huge amount of snobbery going on here as it is damn hard to write the big pop anthems that Dua, Charli, Sigrid et al create. Ask Benny or Bjorn how easy it was to write a pop classic like Dancing Queen, ring Dolly to discover how hard it was to write Jolene, quiz Taylor Swift on how simple it was to write Stay Beautiful or think about how tough it was to write any tune off Carole King’s Tapestry.

McNabb goes on to offer his opinion that he thinks that Dua or Charlie ‘in no way represent the best of what Britain has to offer.’

I’d totally disagree with that. Dua Lipa’s family left war torn Kosovo to make a new life in Britain, and as with so many children of migrants, she has developed a hugely successful career. Charli was nominated for How I’m Feeling Now, which is her response to the COVID crisis to help her fans make sense of lockdown. Their achievements personally and professionally make me proud that they are British acts

I hope after a period of reflection Ian McNabb will have the good grace to withdraw his outdated remarks and apologise to two women who as performers and songwriters fully deserve their nominations.

Opinion by Paul Clarke, you can see his author profile here