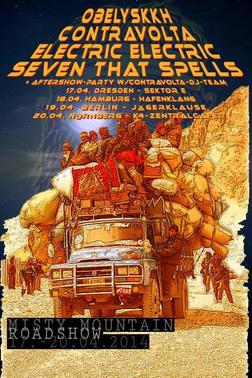 I am in East Berlin tonight for the third leg of the Misty Mountain Roadshow tour, a traveling caravan of four noisy experimental acts from Europe. They switch the bands around for different cities and the line-ups are juggled on different nights so it is DIY action to the bone.

Tonight’s venue, Jagerklause, is covered with hunting trophies of deer heads and antlers. Perfect decoration for the onslaught to come.

With a tea-time start of 7.30, French powerhouse trio Electric Electric lay down the gauntlet in glorious noise. Momentarily jealous of some other punters with earplugs, I have a second of health anxiety, but then remember how irritating they are.

Electric Electric are an excellent live act. Their drummer pounds the kit with ferocious intensity, mending Techno kicks with tribal toms and sizzling hi-hat action. He’s dressed for the gym and looks like he’s having a decent workout.

The guitars and electronics work well together too, needling guitar lines and electro-industrial loops from synth and laptop with some haunting vocals thrown in to create the atmosphere too.  Both the guitarist and the electric wizard have their own percussion for a little extra wallop.

It’s controlled chaos throughout and aggressive in all the right parts. Another hard-working band who get around Europe a lot it would seem. Keep an eye out for them.

After an ear and cigarette break outside, Seven That Spells are just starting their set. They have a progressive, psychedelic feel all wrapped up in sheer tribalism. Just as I arrive in  they have some shamanistic vocals, but they don’t overdo it in the set. Their drummer looks like he’s swinging a sword on a battlefield a few centuries ago and he too is a joy to watch.

The men from Zagreb make a huge racket for a guitar, bass and drums trio. There is a high level of musicianship on show here and they know their craft. If this kind of music isn’t rehearsed, well, it shows. Seven That Spells execute it masterfully.

Berlin’s own Contravolta, sporting some sexy hot pants tonight and touring a new 7 inch, are in top form. Another great band to watch live, the music that comes from the stage is polar opposite to their appearance, which makes it all the more intriguing. Their front man is like a ping-pong ball running around stage, boogieing by himself and diving into the audience to scream and dance with them.

Having seen the infamous Future Island Letterman performance doing the rounds on the net, this man would give him a run for his money. The band frequently break into mathy/funk breaks, before the singer mouths a quiet thanks, lets out an animal roar and they’re off again and he’s back in the crowd. Musically it’s a captivating jump between funk and metal. The fun they’re having on stage is contagious. They take their music seriously, but not themselves.

Headlining tonight is German acid sludgers, Obelyskkh. Having to follow three impressive acts and a false start (I think to light the drummer’s cigarette??) is not easy and somewhat of a lull in energy initially. The venue soon fills with the rather hypnotic sound of morning bird song and then it’s enter sludge, prompting some impressive hair whipping from punters in the front row.

Fresh from the Roadburn Festival in the Netherlands, they are no strangers to big live shows and do the sludge metal thing very well indeed. Lots of phaser guitars and stoner grooves and God-like vocals and thumping drums. They’ve got the dark clothes and the serious faces too which, as a Melvins fan, can be a bit too much, but all part of the package I suppose. Some of the music reminds me of very early Kerbdog, when they were good. If you dig Electric Wizard you will love these guys.

Ears still intact, it’s back onto the streets of the East, which are hopping. The Misty Mountain bands are busy packing up the vans for Nuernberg the following night. Great show all round.

All words by Barry Lanigan. You can read more from our Berlin correspondent Barry on Louder Than War here.