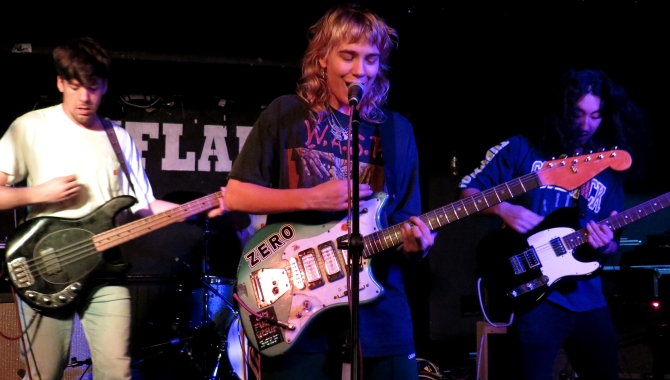 New Zealand’s best export since Wellington Paranormal hit the UK to celebrate their debut album and to turn a Birmingham pub into a sea of blown away ears and smiling faces. Louderthanwar’s Christopher Lloyd was there to report.

Whilst people will frequently bore you with the common known fact that New Zealand has bought you the Lord Of The Rings and Hobbit movies, lately the island in the antipodeans have sent us something way cooler and more fun in the guise of Miss June who have just released their fantastic debut album Bad Luck Party.

Miss June have chosen this nightmarish period of British history to come and cheer us up with a batch of songs that when listened to at home make you want to dance around in the kitchen. As front person Annabel Lidell takes to the stage aided and abetted with drummer Tom Legget, bassist Chris Marshall and guitarist Jun Park, they tear into the album and turn the dancing in the kitchen vibe into a much more energetic release of full-on fun catharsis.

The set focuses upon the two distinctive styles that run throughout the bands sound. Firstly there are the pure punk pop blasts as demonstrated on current single Best Girl which showcases Jun Parks abrasive and sharp guitars weaving all over the place behind an insanely catchy chorus. Showcasing the other side of Miss Junes sound is Orchid, taking the aural complexity of Siouxie and the Banshees and molding it to the sound of Be Your Own Pet’s bounce to a fantastic and unique effect. Like the aforementioned bands front person Annabel Lidell, oozing charisma, has the transfixed crowd locked in her sights as she belts out the tracks poetic lyrics whilst pacing around the stage as much lost in the sound as everybody watching.

Things take an unexpected turn with equipment hiccups halfway through the set leaving the band to fix up their gear. This presents the perfect opportunity for bassist Chris Marshall to hold a group Q&A session on the topic of Birmingham slang, of course providing the opportunity to bring up the obligatory Hobbit references. Apparently that as they’re Kiwies they’re all rather short just like those pesky Hobbits. It’s an amusing diversion from the technical issues and once the hiccup has been hiccuped it’s back to business. The band fire themselves straight back into the set with highlight of the evening Please Waste My Time, three minutes of absolute punk pop perfection, before dropping in the title track from their debut EP, Matriarchy. 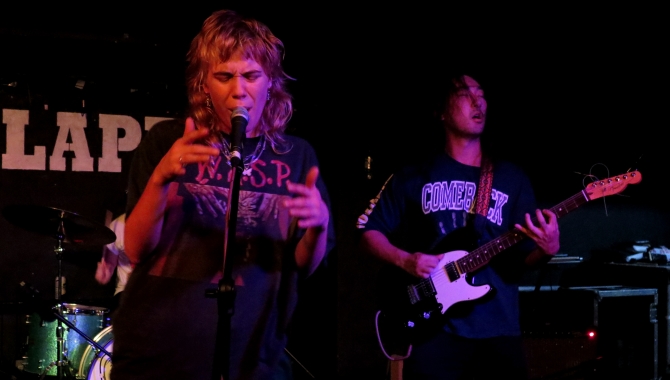 For forty five minutes straight they have the audience in the palm of their hands. By way of thanks Miss June leave us with album closer Polio, a dirty, aggressive dirge that starts by seemingly aping the bass line to the stooges classing I Wanna Be Your Dog, before slowing it down, mauling it and twisting it into a bitter and engrossing cacophony. It ends as abruptly as it started. A visibly joyous Miss June leave the Birmingham stage armed with new slang, new fans and proving themselves as contenders for the finest of New Zealand’s cultural exports along the way.

Words and photographs by Christopher Lloyd.