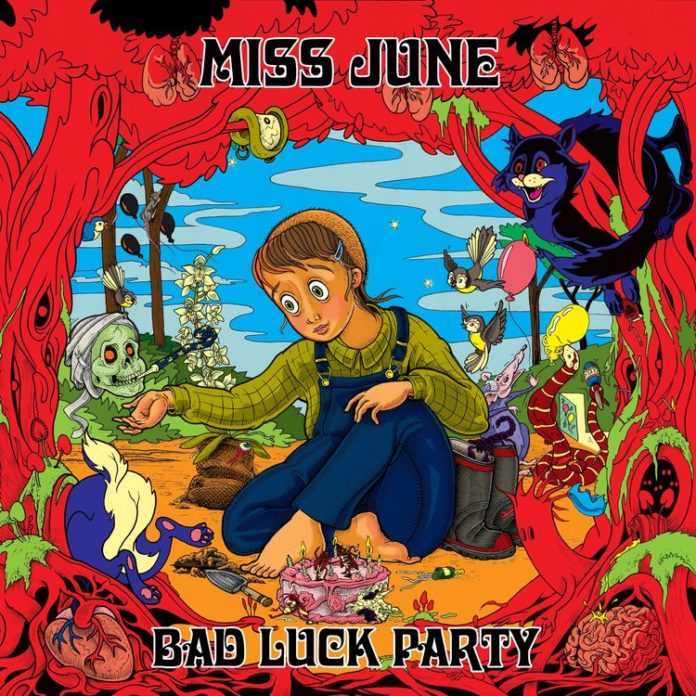 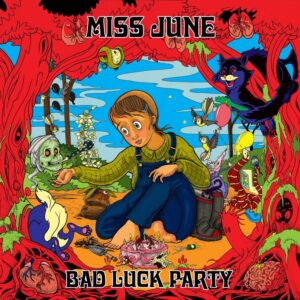 Whatever they are putting in the water in the Southern Hemisphere is working. Yet another Antipodean band comes up with the goods as New Zealand punks Miss June unleash their defiant debut album, Bad Luck Party, on the unsuspecting masses.

My immediate reaction on first listen was similar to that of hearing Liz Phair’s Exile in Guysville for the first time. The unfettered ire and attitude in the lyrics and the passionate delivery reflect the same spirited angst and mood that was so well delivered by Phair on that album. There is also a certain amount of passive aggression that lulls the listener into a false sense of security before Annabel Liddell metaphorically grabs you roughly by the shoulders and shakes you out of your stupor. Lighting a fire under you and inciting a sense of exhilaration and urgency.

From the off, the opening salvo of Twitch and Best Girl the music is brash and bold, the lyrics uncompromising in their provocative stance. Two Hits ramps up the aggression both in the lyrics and the ferociously played instruments before Anomaly, Orchid and Double Negative bring the pace and aggression down somewhat without taking any of the compelling clout away from the songs as they punch out their messages in a quiet/loud/quiet manner.

Enemies return us to the full-on bellicosity with an onslaught of Queens of the Stone Age stoner-rock proportions. Annabel doesn’t miss her target with machine-gun vitriol spat out in the raging animosity that is Aquarium. “I could have been anything, but I chose to be with you”. The pace doesn’t let up as we reach the end of the album. Scorpio keeping the energy going, while the 90+ seconds of Please Waste My Time adds to the acerbic bitterness displayed in Aquarium.

The album ends with another highlight. The foreboding crunching bass of Polio providing the atmospheric undercurrent to the song. Annabel pleads “meet me halfway” through searing guitars before the crescendo builds and her increasingly frantic vocal laments “it always falls through the cracks”.

Excellent stuff. Whatever it is about New Zealand/Australia and the quality of music coming from bands like Amyl & the Sniffers, Press Club and Miss June just now, don’t let it stop. I can’t get enough of it.