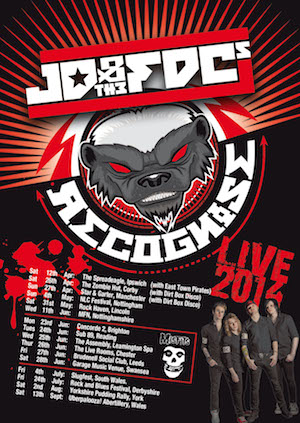 US legends the Misfits will tour the UK this summer with support on every date from the brilliant JD and The FDC’s.

Described as a match made in Hell, this promises to be a night not to be missed as this demonic double-header crashes into a town near you.

Jamie Derelict has spoken of his excitement about the upcoming tour:

“I have a long history with the Misfits. Like many others around the world they were among the first punk bands I was introduced to as a teenager. Then in the late 90s, my old band Panic supported them a bunch of times during the Michale Graves era. In 2003, Panic then toured with the Misfits (then featuring Marky Ramone on drums) extensively both in the UK and in mainland Europe.”

“By 2007, I had started working for them and I’ve filled many roles in the Fiend Crew between then and now. Over the years, Dez Cadena has become a very good friend of mine and Jerry Only has helped me out both personally and professionally more than he will ever know.”

“These days, it’s getting harder and harder for underground bands like us to catch a break, so I’m absolutely thrilled that we’ve been invited to open up for my legendary friends / fiends on this upcoming UK tour.”

“It’s a match made in Hell, and yes, I will be pulling double duty every night!”

For more information on the Misfits please visit their website.

For more information on JD and the FDC’s visit their website.