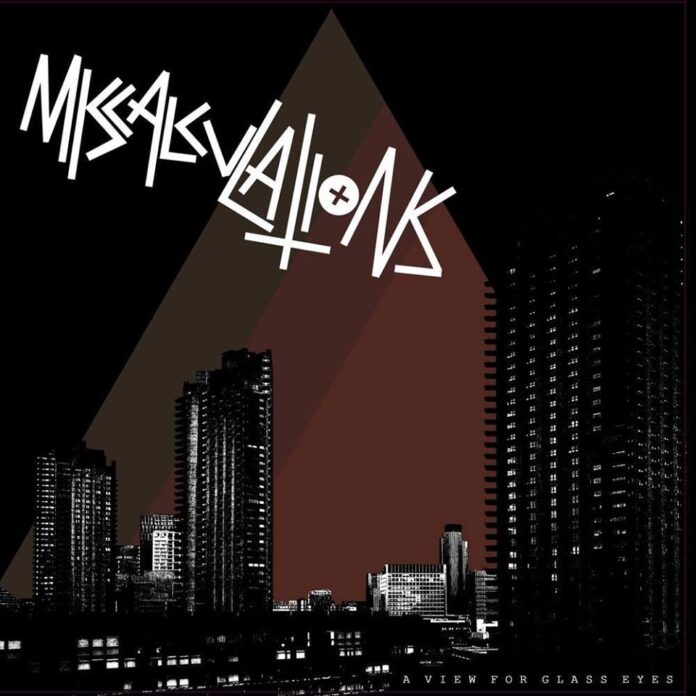 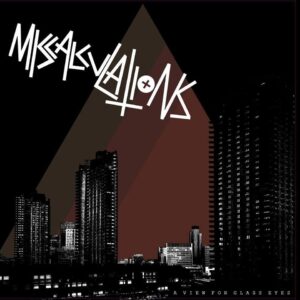 Miscalculations – A View For Glass Eyes

We follow up our recent live review of London electro-punk band Miscalculations with another review, this one of their new album.

London upstarts, Miscalculations return with another offering of electro-punk mayhem with ‘A View For Glass Eyes’, their second album since their formation in 2013. And what an offering it is. As expected they draw the fine line between classic London ’77 punk, all snarl, spit and swagger, and calculated, intelligent later day post-punk.

‘A View For Glass Eyes’ starts as it means to go on with their opening track of the same name, bursting unashamedly into an anthemic, chorus-heavy slice of power-punk. Follow up track, ‘Cutting Room Floor’ does something similar, but allowing this time for distorted vocals from Marco Rodrigues to take center stage, like a young Pete Shelley on speed. There’s no denying Buzzcocks get their share of nods on this record.

The unstoppably catchy ‘Alsatian’ opens with pounding drums that let rise to a classic 70s guitar riff and big chorus before ‘Clairvoyant Stare’ and ‘Factory Life’ take us down a more electro-clash route. A welcome change. This is where Miscalculations really shine, bringing to mind the likes of modern electro-punks Johnny Notebook and the Gigabytes, or even fellow Londoners HotGothic. There’s some Devo in there, a little Kraftwerk, and it’s with these flourishes that ‘Calcs far surpass just the sum of their CBGBs-centric influences.

There’s grit and anger behind these tracks too, perfectly showcased in ‘Pain as a Language’ and ‘Inspirational Hostility’, displaying the kind of raw energy that makes you yearn for their live-show. ‘Invisible Uniform’ leads with new-wave guitars and a more reserved songwritting a la Joy Division or even gig-mates Desperate Journalist, before soaring into chugging verses and another hooky chorus.

‘Recreational Anasthesia’ treads more in the footsteps of a Ramones classic while ‘Severing the Spine Of Confidence’ gives the album a well-timed boost. The obvious single, it does a good job of making sure the album doesn’t drag towards the end. ‘Deep Freeze’ and ‘Science in Reverse’ keep the pace high with deep, pounding bass and a pop-centric climatic ending.

In many ways Miscalculations have released one of the most exhilarating and exciting new albums with ‘A View For Glass Eyes’, it captures the same mood they put forward at their live performances – energy, confidence and just plain excellent musicianship. Unfortunately it feels like they could have said the same thing in half the time. You can’t fault a song, but as an album the flow is disrupted by it’s length, if any other band had done the same it wouldn’t have worked but by the shear amount of hits on this record, Miscalculations get away with it.

Overall it’s packed full of fist-to-the-air choruses, backing vocals The Misfits would envy, and masterful guitar work. But what actually makes this record is the moments of restraint, there are some beautifully engaging lyrics in there, dynamic break downs that leave room to breathe and brilliant synth melodies that set these guys far apart from their throw-back punk contemporaries.

Miscalculations new album can be bought from their Bandcamp. They’re also on Facebook.