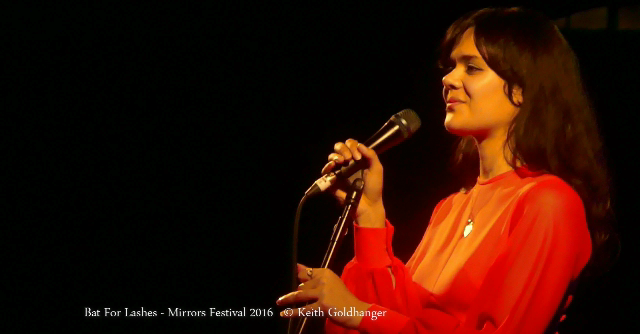 2016 has seen a few of us standing at the same bus stop after a night on the dance floor and Hackney Central station nowadays seems busier with gig goers than ever.

Oslo, Paper Dress Vintage, and The Moth Club are minutes apart from each other and hosting gigs almost every evening. The tables selling beer are erected for events such as this inside the glorious St John at Hackney venue a couple of minutes walk away and this weekend all are in use for the second Mirrors festival along with the additional Stage 3 Venue, a nice intimate bar on the ground floor of Hackney Empire.

Oslo is rammed as we try to see the whites of the eyes of BABEHEAVEN, a polite sounding outfit playing very laid back electronic tunes that surround the powerful voice at the front. It’s an opening band (for us) that we enjoy and need to shoehorn us gently into the unexpected hours ahead.

Standing in a packed room watching a band that everyone seems to fall in love with immediately can be a wonderful experience. We’re not convinced the big wide world is too aware of this band at the moment (although we did review them on this site here recently https://louderthanwar.com/martha-derby-live-review) but surely the time will come when we’re falling over each other to see MARTHA again. What we get from this four piece are short catchy pop punk tunes that go on and on until they stop suddenly as dozens throw their fists in the air and simply do not want any of this to stop. They have a song called ‘Curly and Raquel’ which we’d think is a reference too obscure for a young audience to understand but we googled it and realised that this Coronation Street story line was twenty years ago. So we may be right.

All four members share vocal duties during this pulsating performance, lyrics get picked out intermittently that make us chuckle but then forget quickly as the next foot stomper arrives and we crane our necks to try to work out which member is leading vocal duties. Were reminded of goofy pop punk bands like Weezer (who get played by the DJ as soon as Martha leave the stage) and our hero’s from when we were still in short trousers ‘Girls at our best’ . Martha are a four piece from the North and it’s clear from the reception they get at the end of this that there’s a big world waiting in ignorance to witness this band just as we had been part of an hour earlier. Great stuff.

MIYA FOLICK – has a half decent voice and a couple of decent tunes that we manage to catch the end of before settling down to watch the band we keep being told are ‘One to watch’.

NEON WALTZ are going to tick all the right boxes that will no doubt catapult this Scottish indie band into the realms of Festival big boys one day. Appearances at most of this years festivals probably mean they’re building a fair old fan base out there already but why we are being told to ‘watch these’ yet again puts us into another of those situations that we find ourselves in when we want to shout louder about the bands in our lives that we feel matter more. This isn’t anything to do with the personnel performing their songs that go ‘oooh oohh’ and ‘Sha la la la la ‘ it’s more to do with the experiences that some of us go through when we naively expect something earth shattering but then have to re-tune our expectations into something that our parents are probably OK about when driving the family through the countryside on a wet Sunday afternoon as opposed to something we get an unhealthy obsession over because we can’t work out where they’re coming from. Jools Holland on BBC2 later next year it is then.

HUNCK seem to have a few friends (ourselves included) who are enjoying the psychedelic pop tunes this five piece have in their current repertoire. Front man Freddie dressed in a cool 70’s style suit and sounding not unlike George Harrison at times sways back and forth, allows his band mates to put their own shift in on vocals and together give us half an hour of joy that make us realise that one day a debut album will be born that could last the listener a lifetime.

The first thing we notice when setting our eyes on FUCKED UP’s main man Damian ‘Pink eyes’ Abraham is how bloody fit and healthy he appears in 2016. It’s been a while since we crossed paths and even though the noise that backs him and the thrill we get being in the same room hasn’t changed much he’s gone from veering from a Buster Bloodvessel type Character covered in sweat and blood to more of a Henry Rollins character covered in just sweat. Anyone who know’s this band doesn’t need reminding that Fucked Up really are one of the best in this gendre at the moment. Whilst some of us turn our noses up nowadays at the sight of elderly gents in leather jackets going through the motions of pointing at the audience whilst gasping for breath and singing their songs that contain dozens of expletives, Fucked up still manage to play loud and fast and show the world how punk rock should be played.

We catch a glimpse of the sublime BAT FOR LASHES but it’s a hard change of pace. Having to adapt to a packed St Johns Church from the blistering thrill we’ve just witnessed in Oslo is a bit of a shock as we enter the venue and witness an audience standing almost silent, drinking in the soft subtle tunes that the lady in red is performing for us.

We reach that regular bus stop of ours and we conclude that yet again Mirrors have managed to pull off a second successful event. An event that seems about the right size and with venues close enough to stroll between it allows many changes of mind depending on the mood of the day. For a second consecutive year we’ve attended an event that fails to mention Halloween. Anyone in fancy dress garb looks slightly out of place as we do a double take at anyone wearing such attire before remembering what time of year it is.

As we’ve been watching these bands we make an assumption that the rest of the attendees here seem know a lot about the act in front of them. We can’t be sure, maybe they do. Some of us do hanker for the knowledge that we know about every band that exist in 2016 however after the month some of us have had it would be churlish to suggest we’re not trying hard enough.

So yet again it’s time to thank the people who have compiled this event and welcomed us along. These events are slowly becoming the 21st century equivalent of a compilation cassette that people you barely know but trust have put together and allowed us free reign to wander between venues therefore eradicating those long waits we can sometimes experience in between acts (some of us are so impatient) when we wander along to straight forward one venue gigs.

The bus comes and the folk from North London already on board with dripping make up and rubbish outfits are ignored as we wonder in silence how terrible it must be over in areas like Camden Town, indeed anywhere else in the UK on Halloween weekend.

Something one or two of us really aren’t fans of.

Same time next year then ‘Mirrors’ if you don’t mind please.