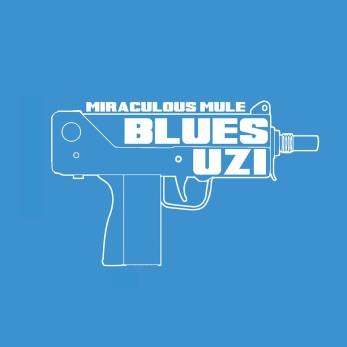 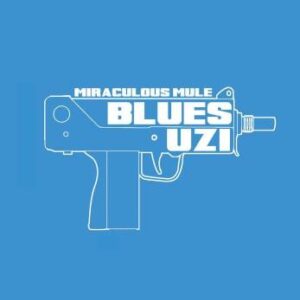 With two albums in 12 months, it’s clear Kentish Town’s Miraculous Mule are a band with a penchant for both hard work and psychedelic exploration. Louder Than War’s Wig Master reviews.

‘Blues Uzi’ comes hot on the heels of the album ‘Deep Fried’ – a brilliant slab of psychedelic, gospel tainted blues. In fact more than half the tracks on this offering come from those sessions. And with the strength of what’s on offer here those sessions must have had some distinguished ghosts fuckin’ around with those flickering VU meters and reel to reel tapes. That’s two albums in less than 12 months, some going i reckon.
For those of you not aware of the Mule they were raised around the tough estates of Kentish Town, North London; these boys don’t wear hoodies, they wear smart suits to play their music – they don’t dress down, they shine their shoes and don’t have to knife someone to command respect.
But what this 3 piece is about is pure soul in its most basic form. Something that with the advent of the digital age has all but disappeared. For inspiration Miraculous Mule reach deep into the African American songbook from early mid 20th century and they come up with an incredibly uplifting sound. 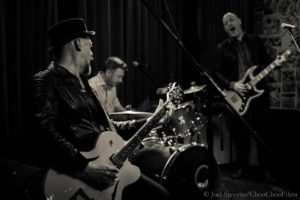 As Patrick says on Track 1; ‘Blues Uzi’, “Wake up get a little bluesy – take a few shots from the big blues Uzi” – there’s a touch of Jon Spencer Blues Explosion here, a polyrhythmic, percussive, multi-layered jam with the guitar coda slightly backed off for the lead vocal to weave its voodoo mantra.

Track 2; ‘Highway Sound’ starts with a beautiful riff that nods at Hendrix’s quieter moments, and with Michael intoning a beautiful soulful ballad that builds and veers off into a soaring chorus, and ending on Michael soloing into glory with great layered gospel backing vocals, courtesy of Alex Petty. The Highway Sound is a lonely sound baby, sweet sublimation.

Next up is ‘I Don’t Do Nobody Nothin’ A long term staple of the Mules live set and originally an ancient field holler; kicks in with a riff that the great Eddie Hazel would have been proud of, a medium paced sub Funkadelic groove with Michael laying down a soulful scenario of pain and confusion. The chorus jumps out with Alex’s stunning gospel style backing vocals. Ian’s fire bell percussion, sounding like a church bell, just adds to the undercurrent of desolation, while the guitar solo soars and the bass locks the groove right down.

On ‘City Of Refuge’ it’s Michael’s soul preacher ripping through some country blues stomp – from the Blind Willie Johnson book of travelling songs, as in gotta move on. Michael rewrites the lyrics from Johnson’s original while a tormented blues harmonica tears up in the distance – “the land is cursed, the exodus has begun” – ain’t that the truth?

Track 5 ‘Judgement’ starts with a fine picked out banjo straight from the Dock Boggs folk blues arsenal, and again the fire ‘n’ brimstone gospel influence is huge. Pat lays down a fine upper register bass coda and the distorted harmonica sets the scene. Taking country blues from acoustic to electric has been attempted by many Clapton tried it, Zep, Hendrix, Muddy, John Lee and Jack White with varying degrees off success; on this track the Mule pull it off in a way none of these could have imagined.

Track 7 comes originally from the first Miraculous Mule offering, the self titled, vinyl only, 6 track mini album – for the first time here in digital form the sublime ‘Wayfaring Stranger’. A skillfully produced gospel infused groove using old religious imagery; and the message is hope. Again with Alex Petty’s beautifully weighted backing vocals adding a haunting counterpoint to Michael’s lead. When he hits the lines “I’m goin’ there to find my brother” …. and the gospel backing vocal slides in it sends shivers running down the back, and as ever, Ian’s understated beat keeps the liquid groove on track.

Lastly, Track 8, also from the same mini album as the previous track ‘I Know I’ve been Changed’ is another gospel inspired tune – the groove bringing to mind the hard working Mule tilling the tough ground. A metaphor for a lifetime of toil. It’s an old groove you’ll already know because it’s timeless. The message of the song is the power of the music.

Something you’ll notice about Miraculous Mule if you know a little about blues music, it’s origins and influence is that gospel and the blues or secular music were / are sworn enemies. The disparity between the singular travelling musician and the church was an unbridgeable chasm. But if you look a little deeper it’s obvious that the two music forms come from the same root, the same song structures the same chordal arrangements and with the same passion. Miraculous Mule have made a conscious choice to embrace the beauty of gospel music and the blues and incorporate both within their sound. But also they do away with the hypocrisy of a system of belief that refuses to change.

If we’re talking about about white British interpretations of the blues related music, you’ve got the Stones for the 60’s, Dr Feelgood for the 70’s, Screaming Blue Messiahs the 80’s – but Miraculous Mule bring the genre directly up to date. That’s how good they are – nobody is even bothering to try to make music like this – its a lost art. Savour it.

NOT SAFE FOR CHILDREN

All words by The Wig Master. More from the Wig Master can be found at his Author’s Archive.