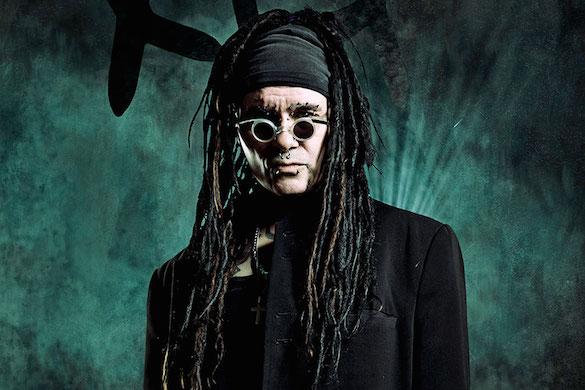 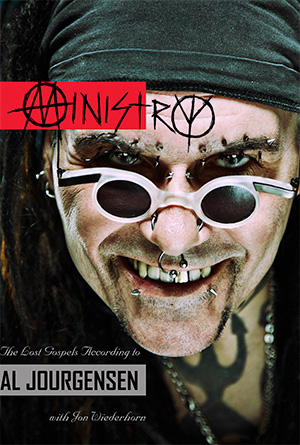 Ministry, the dust jacket says “imparts the epic life of Al Jourgensen, a survivor who tempted fate, beat the odds, persevered, and put the pieces back together after unraveling completely.” Louder Than War’s Andy Santiago recently finished reading the book – his review’s below.

It’s hard for me to believe that so far, the best gig I’ve EVER been to was nearly 22 years ago.

It was the first time I ever set foot in Nottingham Rock City and the band in question was Ministry.

About 2 1/2 hours after support band Helmet had finished their set there was still no sign of the headliner. I’ve never been in such a tense, expectant and borderline violent atmosphere. The place felt like it was going to explode. And then the lights dropped and Ministry took to the stage. A tall, imposing, dreadlocked figure in a cowboy hat approached the mic at the front of the stage, fixed the crowd from behind his mirrored aviators, necked half a bottle of Bushmills and spat the never to be forgotten words. “New song. N.W.O.”

What followed for the next 90 minutes was the most beautifully chaotic, destructive mayhem and carnage I’ve ever seen at any gig, before or since. That was my first experience of Al Jourgensen in person and it was blatantly obvious this man was not like any other, there was something genuinely dangerous about him and chaos not only followed him, he actively welcomed, sought and craved it. Not only that, he was the architect of some of the most intense and glorious noise I’ve ever heard.

After that life-changing night in Nottingham, I saw Ministry several times again but they never quite hit the peaks of that first time. I’ve never seen them do a bad gig, but I guess that first encounter was impossible to live up to.

It’s fair to say, Jourgensen has lived an extreme life and just how he’s still alive will go down as one of the great mysteries of all time. But alive he is and the world is a better place for it.

I became aware that Al had recently had his autobiography published so decided to get hold of a copy and see what his side of the story was. And what a story.

“If you remember the 90s, you weren’t there” – Al Jourgensen

“Ministry. The Lost Gospels According to Al Jourgensen” is actually quite an inspirational read in the way it illustrates how one man can hit such inconceivable lows and yet still survive and ultimately come out at the other end not only a survivor but in a much better place.

The book isn’t just one long drug-related anecdote, though drugs and Jourgensen are synonymous. His Herculean consumption of narcotics and alcohol are indeed detailed within the book and over 22 years of constant abuse it makes for some uneasy subject matter.

With a band as unhinged as Ministry, the tales of debauchery, decadence and general tomfoolery make for some lurid and frequently hilarious reading. The stories Al narrates about Madonna (terminal body odour), Courtney Love (unruly pubic area!) and Joey Jordison of Slipknot when he played with Ministry genuinely made me laugh.

Throughout the book, Jourgensen is brutally honest about everything that has occurred in his life so far and tells his stories in an unflinching manner. He actually comes across as quite a likeable sort of person who is fiercely loyal and kind to those close to him and the chapter on the premature death of best friend and Ministry guitarist Mike Scaccia is incredibly touching

It is difficult reading in some places when he’s describing how former bandmates fucked him over at every opportunity, one even took out a massive life insurance policy on Al so as to cash in on what seemed like the imminent demise of Jorgensen when he was at his absolute pinnacle of abuse.

Jourgensen’s story is as captivating as it is uncomfortable, he literally has ‘been there, done that’ with everything, yet his legacy is unquestionable. 6 times Grammy nominated and a massive body of work, not just with Ministry but other projects such as Revolting Cocks, Lard, Pailhead and Buck Satan and the 666 Shooters. His influence over the world of extreme music is massive and quite simply, without Jourgensen, bands such as Nine Inch Nails, KoRn, Slipknot (the list could go on and on) just would never have existed.

And so, at present, this great anti-hero and undisputed ‘Godfather of Industrial Music’ is drug and alcohol free and Ministry is no more.

However, there has been talk of Al taking Ministry out on the road one last time as tribute to the late Scaccia and playing the last album the two worked on (‘From Beer to Eternity’) in its entirety.

I would strongly recommend this book to anyone who has even a passing interest in Jourgensen, Industrial Music or just likes unbelievable tales of Rock ‘n’ Roll, excess and ultimately, salvation.

~
‘Ministry, The Lost Gospels According to Al Jourgensen’ with Jon Wiederhorn is available now and published by Da Capo Press.

All words by Andy Santiago. You can find more work by Andy over at his LTW Author’s Archive here.