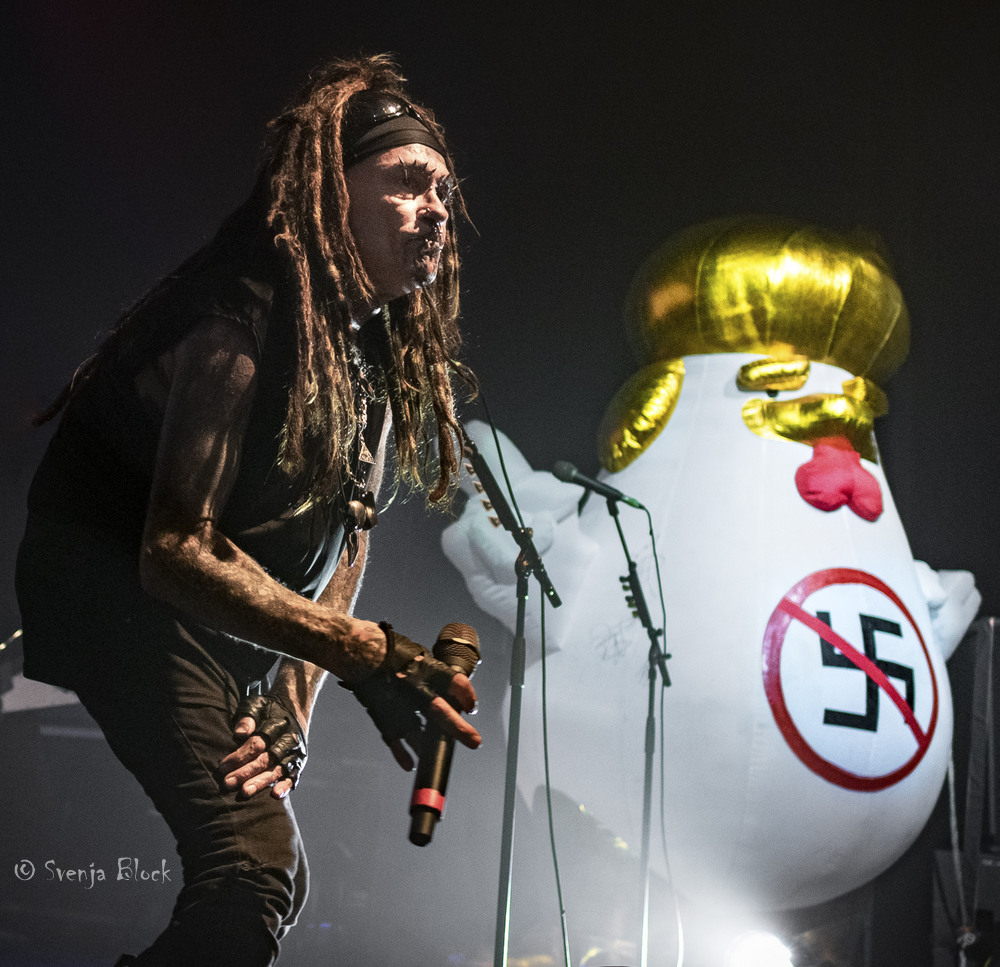 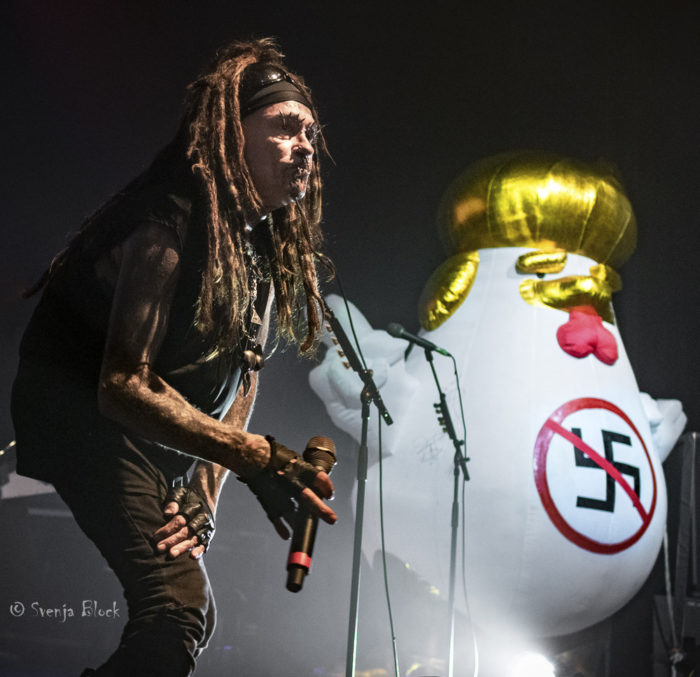 Dissatisfaction can be the mother of invention. And Jourgensen’s reaction to “Hurricane Cheeto” has clearly been the catalyst for Ministry’s latest offering – AmeriKKKant. Despite his concerns for the future, however, the venom the singer possesses for his nation’s leader appears to have given the industrial metal icon a new lease on life.

The sextet dive into their set with Twilight Zone. Footage of the orange-faced US president is projected, warped, tweaked and distorted onto a large screen behind the band. Donald’s famous campaign slogan about the return of greatness is slowed down to haunting effect as the band members arrive onto the stage with the intensity of an anti-fascist rally. With masks and face-obstructing bandanas in situ across all the members, the group’s unique sonic signature steadily falls into place. Guitars stab. Keyboards pulsate. Bass notes rumble. Tom Toms stomp. And DJ Swamp’s decks stutter the track’s title behind sampled and pitched down spoken-word vocals. Jourgensen then makes his grand appearance with echo infused vocals. “Disgusted and depressed. We know the world is just a mess”. This is an intense performance from the outset. And there’s no respite. Ministry fans, after all, wouldn’t have it any other way. The opening number’s chorus is punctuated by an aggressive harmonica solo from Jourgensen. It’s fitting that this modest and easily accessible working-man’s instrument is incorporated into what is a very modern and highly charged take on the blues. The mouth organ quickly gets thrown into the crowd in favour of a white teardrop guitar as the group launches into Victims of a Clown – another fervent and hypnotic offering from Ministry’s latest album. Feeling my shirt vibrate to the bellowing bass, I decide to gaze over at the sound desk. The decibel meter is hovering around 110 which is the equivalent of a turbofan aircraft taking off. Despite its aviation levels of loudness, the overall mix out front sounds monstrous yet articulate and you can feel every kick drum hit in your chest. And this ode to the leader of the first world’s victims is heightened in intensity further by powerful vocal additions from bassist Tony Campos and the frontman’s impressive slide guitar work. Two songs in and the audience has already been treated to harmonica and slide guitar solos. This is industrial metal blues. And, given that the recent political state of the world feels like the antithesis of utopia, Jourgensen has every right to embrace his inner bluesman. 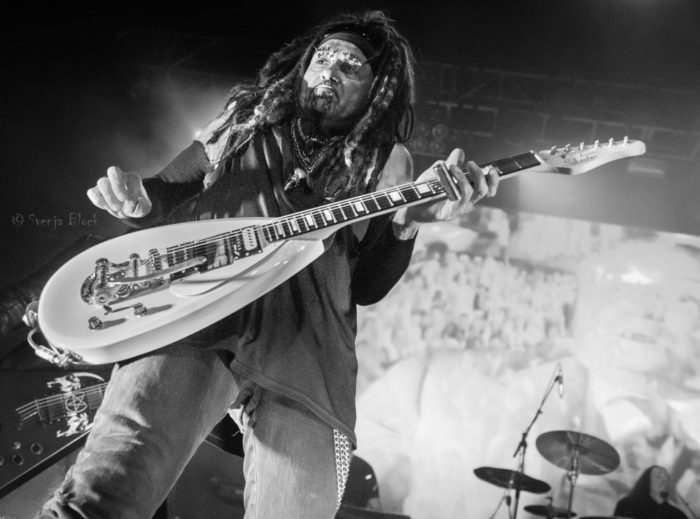 Featuring morphing video imagery of Trump spanning time, the prescient Punch In The Face from 2013’s From Beer To Eternity takes on an updated and more poignant direction. After finishing this megaphone-infused tune, Jourgensen indicates to that he’s “had enough of arseholes” as of late and references the UK’s own Nigel Farage and Boris Johnson as being “douchebags” of a similar ilk. Despite the rage of his lyrics, the Cuban-born singer is surprisingly upbeat in his demeanour. Even when lamenting the US administration’s current fearmongering surrounding immigration – it’s done with humour and theatricality. And a fitting introduction to Señor Peligro from Rio Grande Blood. The eponymous title track from this ‘Billboard Top 200 album for 2006 ‘follows amidst strobe lights matching every rapid-fire snare hit with machine gun precision.

Following LiesLiesLies, the screen footage departs from the quickly edited news clips and graphics to reveal the sweaty capacity crowd at the O2 Forum. This serves to illustrate the ‘here and now’ element of the new songs that follow; We’re Tired of It, War Games and Antifa. Following this trio of industrially charged angst, Jourgensen quips “that was some political diatribe from 2018. Now here’s some political diatribe from the 1990s. It’s the same old shit, everybody”. The hits from the George Bush Senior-era follow. Just One Fix, N.W.O. and Thieves are as intense in performance as they are critically nostalgic of earlier Republican governments. Closing the set is a high-octane version of So What from 1989’s The Mind Is A Terrible Thing To Taste. 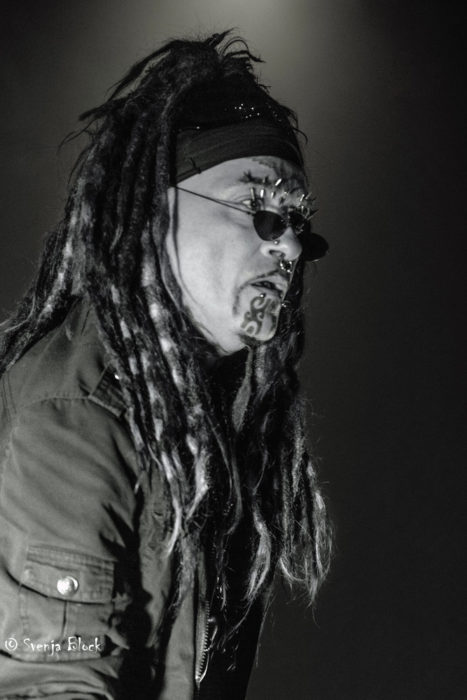 Ministry return for one encore and deliver expanded versions of Psalm 69 and Bad Blood.

It’s a testament to the strength of the new album and Ministry as band that this gig was such a triumph. The group’s muscular sound on record was captured to perfection live. Derek Abrams’ drumming balances the delicate tightrope between hypnotic and aggressive with extreme precision. And creating movement behind the kit with such a full bodied sonic onslaught happening above the rhythm section is no easy task. His partner in crime, bassist Tony Campos, is as solid as a sequencer and possesses a dexterity that keeps the group’s low-end tight and exciting throughout the set. In addition, the twin guitar assault of Sin Quirin and Cesar Soto melded into one outstanding and complimentary force and the two musicians are both extremely adept at working the crowd. Ex-Killing Joke keyboardist John Bechdel maintains intrigue and mood-shifting soundscapes via his synths and patches that are integral to Ministry’s industrial sound. And, finally, DJ Swamp deserves an honourable mention with his sub-human juggling of decks, soundbytes and samples while also maintaining a sense of fun onstage. And holding all of this together is the brainchild behind it all – Al Jourgensen. An inspirational and highly energetic frontman with a theatricality, voice and spirit that helps to convey the message of his passionate lyrics with clarity and power. This son of immigrants is the very embodiment of what Trump rails against. And a prime example of a creative force who is genuinely helping to make America great (again) by simply asking his country to take a good look at itself. 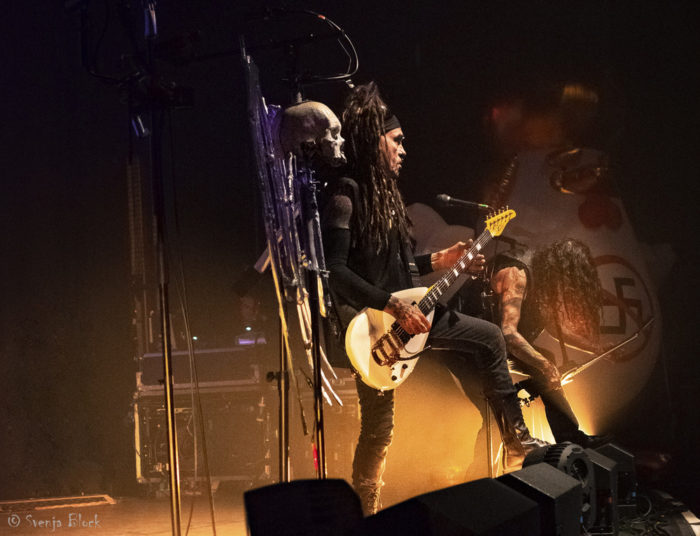 AmeriKKKant is out now via Nuclear Blast.