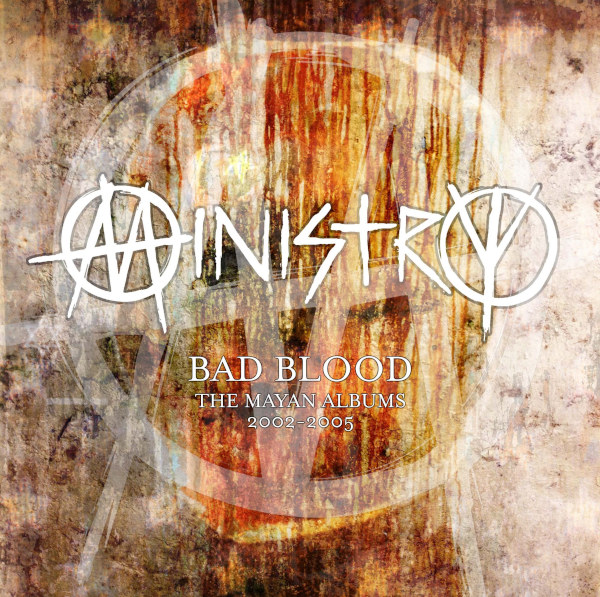 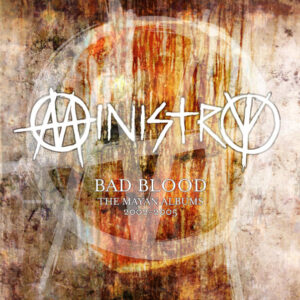 Bad Blood is a four CD box set reissue of Ministry recordings on the Mayan label. It includes the industrial metal pioneers’ 8th and 9th studio albums alongside a high quality live album and remixes of classics spanning the band’s career. A perfectly timed release if you’re seeking a gift for the Ministry fan in your life, says Nathan Brown

Ministry are arguably most responsible for the ongoing appeal of industrial music.
Having dabbled in synth pop, the outfit led by Al Jourgensen eventually settled on a winning formula. They took the essence of early Killing Joke and fused it with the robotics of a factory production line or an advancing Cyberdine Systems T1000. To this they added in the heavy guitars and high octane double kick drums of speed metal, thrash metal and (what was to become known as) grindcore. Beefing up the drums with programmed beats and samples, the ingredients were all in place. All set off by otherworldly, alien vocals. Think Predator asking “Want Some Candy?”.

The result was heavy, rhythmic, gnarly – and sometimes fast; a sound appreciated by punks, goths and metal heads alike. Getting agreement across these subcultures is a feat usually reserved for Motörhead. As an aside, when Killing Joke returned with Pandemonium in 1994, I for one thought their more metallic edge was a direct response to the likes of Ministry who’d taken the KJ approach and honed it.

I enjoyed their late 80s albums, The Land of Rape And Honey and The Mind Is A Terrible Thing To Taste, but then they really turned up the dial for Jesus Built My Hotrod (which involved Gibby Haynes from Butthole Surfers) in 1991. This pretty much propelled them into the mainstream via MTV. To this date it is still a dance floor filler in some alternative clubs. By the time they released the Psalm 69 album, a year later they were well-established. I confess I’d turned off not long after this as they seem to have developed a fairly solid formula.

This is not to criticise the talents of Jourgensen et al, but they had that problem all bands face when they have reached a certain volume of back catalogue; if you don’t change your sound you end up churning out what has become a “familiar product”; if you change it too much you alienate your core audience. The marketing department’s nightmare. But musicians aren’t marketeers they are artists. I could list plenty of bands who I still love and will enthusiastically watch live, but in my opinion have released too many LPs with probably one good track and a load of filler rather than releasing a single.

This four CD set released by Cherry Red imprint HNE Recordings compiles Ministry’s output for the Mayan label (an imprint of Sanctuary) between 2002 and 2005. At their best, Ministry are all machine gun drum machines, heavy AF guitars, chunky driving bass lines and growling or shouted extremis vocals. Hearing back some of what they did between those years I realise I may have missed out.

Amusingly titled Sphinctour, originally released in 2002, captured the Ministry live sound on their 1996 tour promoting the Filth Pig album. The 11 tracks are of an impressive high quality for a live recording. Recorded straight from the mixing desk, without any further mixing or overdubs, you get a real feel for the live experience. There is inevitably a lack of the crystal clarity of studio recordings but it’s not noticeable. I think this demonstrates the professionalism and attention to detail of Jourgensen et al. Okay, the recordings are from a whole range of venues so they will have cherry picked the best, but still impressive quality nonetheless. Stand out tracks include the robotic mayhem of Thieves, the horror laden Scarecrow plus the obvious favourites Psalm 69, NWO and Just One Fix.

2003’s Animositisomina was Ministry’s palindromic eighth studio album. The 10 tracks feature nine originals and a cover. You get taken through the range of Ministry sonic approaches. There is metal in Animosity, a punkier sound on Lockbox, Stolen has a hateful, tortured sound, Impossible is a robotic rampage, and Unsung and Piss both deploy something of the atmospheric Jas Coleman approach on the vocals in places. Shove and Impossible are less heavy, leaning more towards the NIN-end of industrial. There is a Southern hillbilly influence in Broken with wah wah and slide guitar veering more towards the sound of Revolting Cocks (another Jourgensen project).

Closing track Leper, a nine-minute instrumental song, takes its time, building tension with a repetitive bassline much like the soundtrack to a thriller with the ticking time bomb running in the background. Somewhat like A Mind Is a Terrible Thing… era. The warbling electronics prior to the mid section have the middle Eastern pipe sound of The Pandys Are Coming (yeah, I know I’ve mentioned Killing Joke already but I can’t unhear the similarity). A heavy guitar heralds the crashing drums/drum machine and then there is frenetic lead guitar to the end. For the most part, the album sounds familiar – and what you would expect from a Ministry recording. The take on Magazine’s The Light Pours Out Of Me is a faithful copy and sounds closer to Magazine than Ministry with the usual heaviness being wound back. The guitar is more John McGeoch’s than Ministry and the vocals emulate Howard Devoto rather than the usual growl.

Houses Of The Molé

If Animositisomina was “typical” Ministry then 2004’s Houses Of The Molé, their ninth studio effort saw the band further embrace thrash metal. Whilst still recognisable as Ministry, complete with samples, the bulk of the sound leans more to the Megadeaths and Metallicas of this world. Clearly they had splashed out on some amps that went all the way to 11. The opener No W uses Ave Satani – known to most as the Omen tune – alongside George W Bush samples to start an album that is mostly an assault on the then president. Yes, Ministry cast him as the antichrist. All but one of the other tracks spell out what Ministry think the W might stand for. Waiting is something of a continuation of Thieves in the rhythm department. Worthless has that Predator meets Killing Joke sound again but at a faster pace. Wrong is dominated by a grinding bass before the chuggy guitar kicks in. Guitars weave in and out of each other to provide layers of sound above which the tormented vocal floats.

Warp City with its constant snare drum rattle and drawling sample has a dash of redneck to it, with damped metal guitars reminiscent of thrash metal standards like Metallica’s Whiplash.

WTV is everything turned up to 11 and sounds like a robot listening to speed metal while channel surfing on the TV. I personally find the constant stop start a bit jarring but I guess that’s the point. “Make it stop!” World is slow and lumpy with an anthemic feel to it. Think Stainless Steel Providers (Revolting Cocks) and you’re in the right ball park.
WKYJ is fairly standard Ministry (even though there is no such thing!) but with even more heavy guitar. The guitar solo is pure homage to thrash metal. And the faux redneck DJ ending is a chuckle.

Worm is slow and almost NIN in feel. Dark sleazy and brooding rather than heavy: music to torture kidnap victims to….put the lotion in the fucking basket. Psalm 23 is a remix of No W, taking a sampled performance of the US national anthem as it’s jump off point. Put through studio effects it is sinister and followed by a George Dubya sample about fighting war against evil. The closing Walrus is soundscape rather than song to complete the album.

The fourth disc in the collection is Rantology from 2005. Largely a compilation of remixes, the only brand new track was The Great Satan, seemingly another poke at USA foreign policy. Vying with a revamped NWO (New World Order) from Psalm 69, bedfellow Jesus Built My Hotrod is arguably one of the highlights, making a welcome reappearance with plenty of revving engines, chugging guitars and samples. However, the return of classic Ministry tune Stigmata from 1988’s The Land of Rape and Honey probably pips them both to the finish line. Three live songs from the first disk are tagged on the end for good luck bringing the tally to 15.

The box set booklet has extensive sleeve notes from Malcolm Dome, who unfortunately passed away between penning the words in August and the box set release in December. He uses snippets of conversation with band members to illustrate the bands background and reveal the creative process behind Ministry.

Trying to work out who this is aimed at, I guess there are Ministry maniacs filling in the gaps of records they couldn’t afford – or sold when they had the same habit as Jourgensen. Given the fact that the live and remix discs cover some of the “classics” this might even be a good collection for people dipping their toes into Ministry. However, I reckon this would probably be the perfect Xmas present for the parent or significant other who’s made it from Goth To Boss and would love this soundtrack for their daily commute in the executive hearse.